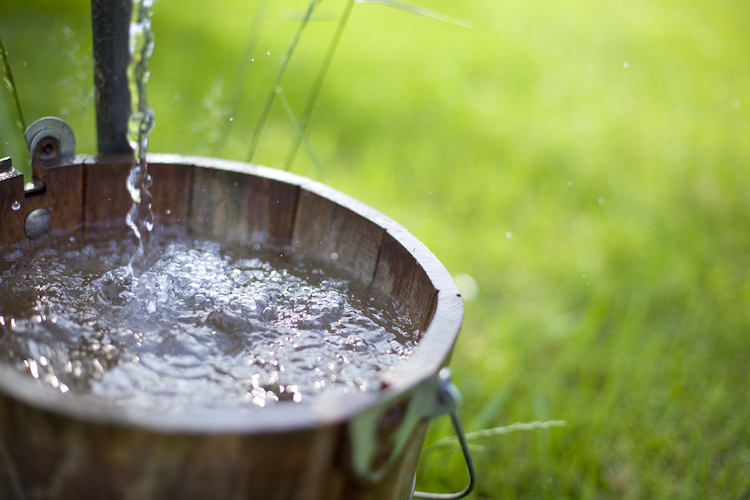 Fresh water from a well flows out into an old bucket. Shallow depth of field for focus on water.

As a leader of the ritual development committee at Bet Mishpachah, Alex Carter is responsible for creating new prayers when congregants at the LGBTQ+ synagogue in Washington, D.C., feel a need for liturgy that speaks more directly to their experience. Carter has been writing such prayers for a decade and has found it rewarding, except that, in the absence of like-minded writers steeped in Jewish texts, it’s been a lonely job, she told eJewishPhilanthropy. When she learned about ADVOT@Ritualwell, an online community for writers focused on liturgy and other religious forms — she knew immediately that she had found a literary home.

“It’s tough when you’re writing prayers or piyyut [liturgical poems] in a poetry group when everyone is quite secular, and not Jewish,” said Carter. “They’re appreciative, but they don’t have the textual background to really figure it out.”

ADVOT, which means ripples in Hebrew, emerged from Ritualwell, Reconstructing Judaism’s online repository of original prayers and rituals, said Hila Ratzabi, a poet who is Ritualwell’s director of virtual content and programs.

Ratzabi noticed that a community of writers was forming around Ritualwell’s “immersions” — online writing sessions of about 10 people. They were commenting on each other’s work on the site, meeting each other during the sessions and becoming muses to each other.

Funded by a $20,000, one-year grant from Lippman Kanfer Foundation for Living Torah, ADVOT consists of a monthly interactive salon, weekly writing studios during which participants write independently but in community on Zoom and one-on-one mentoring from Ratzabi four times a year.

Ritualwell was founded in 2001 by Jewish feminists to foster the creation of content relevant to women’s lives, such as a prayer for a baby girl’s naming ceremony, or a healing ritual after a miscarriage, Ratzabi said. There are now more than 2,200 pieces on the site, and its scope has grown to include the LGBTQ and disability communities, issues of racial justice and inclusion, responses to natural disasters and the coronavirus pandemic.

Even the Mishnah, compiled at the beginning of the third century and considered the first written collection of Jewish law, contains mentions of rituals created by laypeople, such as the practice of some women to weave in the moonlight, said Rabbi Lawrence Hoffman, a professor of ritual at Hebrew Union College-Jewish Institute of Religion.

Women developed many of these customs over the centuries, but not all of them, he added. In the early years of its adoption, Kol Nidre, the prayer that opens Yom Kippur, was mentioned by rabbis as a grassroots custom — one that did not meet their approval, Hoffman said.

“We are in an inventive age,” Hoffman said, noting that while the invention of the printing press and the spread of books tended to codify practice and stifle innovation, the internet has had the opposite effect.

A video of a rabbi washing his hands, set to the words of Ritualwell contributor Trisha Arlin’s “A Blessing for Washing Hands During Pandemic,” has attracted almost 10,000 unique page views, Ratzabi said. “It’s interesting to see Jewish practice evolving in real time.”

ADVOT’s first salon, held on Oct. 4, was structured around themes of creation and chaos drawn from Genesis. Ratzabi created a source sheet that contained questions for reflection; traditional text from medieval Rabbi Berechiah; a quotation from David Ebenbach, author of The Artist’s Torah; and one of Ratzabi’s own poems.

“For funders, finding grantees who are doing a fee-for-service program is a dream,” said Valerie Rosenberg, chief of staff at Lippman Kanfer. “We’re always asking, ‘How can you do this more sustainably?’”

ADVOT came to Lippman Kanfer’s attention serendipitously, said both Rosenberg and Ratzabi. Ritualwell was giving a report on another grant from the foundation that supported the creation of pandemic-specific content, and Ratzabi happened to mention that the relationships that were taking root around the site.

That interested Rosenberg. “It’s almost like there’s an undercover movement of people creating prayers and rituals,” she said. “It’s not centralized, but it has structural support in Ritualwell.”

Lippman Kanfer also appreciates Ritualwell’s inclusive nature. Contributors to the site include every Jewish denomination, many who aren’t affiliated with a traditional community and even people who aren’t Jewish.

“Rituals are often created by those who feel excluded,” Hoffman said. “Customs tend to arise in homes, where you can do whatever you want. Synagogues are the public domain.”

When Ritualwell announced ADVOT in its newsletter and on social media, it explicitly invited people who are low-income, have disabilities or are in the LGBTQ community.

“That signaled to me that I could find a place in this community,” Carter said. “I can read LGBTQ people into the stories and the liturgy.”