Synagogues aren't sure whether members will pay this year. 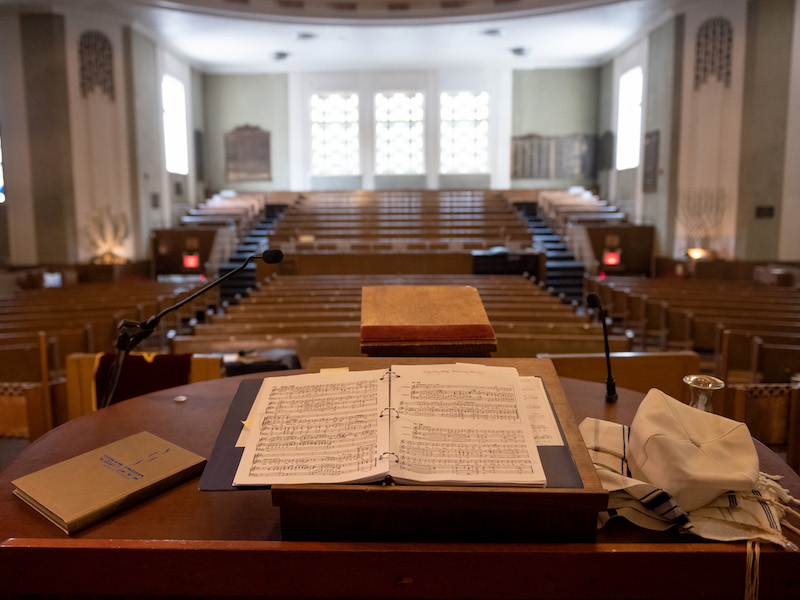 A synagogue in New York City.

As a policy, Manhattan’s Congregation Beit Simchat Torah doesn’t sell tickets for services on Rosh Hashanah and Yom Kippur. To charge for High Holidays, says synagogue President Sabrina Farber, is “just not in our DNA.”

But this year, two years of pandemic-driven challenges and a recent economic downturn have made sticking to that policy more difficult for CBST, an LGBTQ+ multidenominational synagogue in midtown Manhattan.

“People have left jobs, people have moved, people have suddenly downsized in a way that obviously impacts giving,” Farber, whose synagogue instead asks for dues on a sliding scale, told eJewishPhilanthropy. “I’m not gonna lie, we’re in a tough spot.”

Rosh Hashanah and Yom Kippur can overwhelm synagogues in every way. Staff and volunteers are swamped. Some synagogues rent extra space, while others rent chairs or additional equipment. Organizing services can cost congregations exorbitant amounts of money. For many congregations, Rosh Hashanah and Yom Kippur are some of the only days members attend services. Because of that, congregations often depend on High Holiday appeals, ticket sales to non-members and annual membership dues — generally paid during the High Holiday season — that support the synagogue all year. Many synagogues told eJP that they need a ticket system simply because there is just not enough space to accommodate everyone.

But this year, congregants and synagogues across the country are stretched thin, whether they have voluntary dues, set dues, negotiated dues or a tiered payment system. When congregants have less money to spend, will synagogue membership still be on their radar?

For most synagogues in the Conservative movement, budgets, including staff contracts and membership fees, have already been set for the year, Linda Sussman, the interim director of synagogue consulting for the United Synagogue of Conservative Judaism, told eJP. Recent economic shifts, she said, would “certainly not [be] something that could affect anything in terms of [determining what this year’s] membership dues would be. That would be next year.”

While synagogues may have saved money on serving food and hiring security while they were closed due to COVID-19, Sussman said that the pandemic hasn’t lowered expenses for most synagogues. Staff salaries generally remain their biggest expense.

When the pandemic began, many Conservative synagogues anticipated to take a massive hit in terms of synagogue dues, expecting membership payments to drop off as much as 20%. But instead, Sussman said, “It was much, much, much lower, more like maybe 3 to 5% of the drop.” According to internal studies conducted by USCJ, she said, donors stepped up too, understanding that synagogues were under financial stress and needed extra support. “Whether that will happen this year again, I don’t know,” she said.

But as synagogues begin to consider next year’s budget, Barry Mael, the senior director of synagogue affiliations and operations for USCJ, told eJP that an increasing number of synagogues are considering moving from fixed to voluntary dues.

“I’m getting more calls in the last several months about synagogues…evaluating if their dues model was the best dues model for them,” he said. “Sometimes coming out [of] something like a pandemic, where so many things have been upended, it’s a good time to evaluate and say are we generating our revenues and supporting the community in the best way?”

For those who made the jump to voluntary dues, “overall they feel good about it,” Mael said. “Sometimes it’s a matter of culture, that people don’t have to ask for a dues level. They make a pledge, and therefore that whole awkward process of some people needing to talk with others about what they can give disappears.” But no matter the dues model a synagogue chooses, he said it’s important for congregations “to make sure they’re not confusing the dues model as the answer to their financial challenges versus looking at their overall financial sustainability.” Instead, he said, they need to focus on cultivating a culture of philanthropy by strengthening their relationship with members.

“The word ‘dues’ maybe doesn’t sit as well with people as it once did,” he told eJP. So he stresses “the concept of recognizing that there is a commitment to being part of congregational life.” Like most congregations across movements, Beth Shalom won’t turn members away if they can’t pay.

“We try to really work with people,” Melman said. “There are people in the congregation who pay more than their commitment amounts to help offset those people who aren’t able to pay. We call it pay it forward.”

COVID and the economy have accelerated the way synagogues think about the economics of the High Holidays, Amy Asin, the Union for Reform Judaism’s vice president of congregational engagement and leadership experiences, told eJP, “but a lot of these trends were happening before.” Synagogues were realizing that even though their own costs were increasing, she said, they needed to see the High Holidays as an opportunity to engage their communities, not close budget gaps.

“On the other hand, they do need revenue,” Asin said. “From their perspective, if they could charge, I’m sure that they would. I’m sure that they would want to raise prices. They’re balancing a lot. And many of them, even before the pandemic, had started to lower their prices or not charge. They’re balancing their own economics, their own structure, the effect of their costs going up… And at the same time, they want to lower barriers to participation in Jewish life, and they want to deliver something that’s deeply meaningful and transformational for the people who attend.”

Rabbi Jill Maderer of Congregation Rodeph Shalom, a Reform synagogue in Philadelphia with 1,000 members, told eJP that while many members are not able to give as generously as they did in the past, more members are contributing smaller sums.

“We’re really pleased to see people who are really showing their commitment, but it’s not easy,” she said. The synagogue has a three-tier system for dues based on how much a member can afford. The synagogue also organizes a weekly food pantry and has hosted a diaper drive.

Synagogues are also searching for new ways to support themselves. Asin said that some Reform synagogues have planted cell towers on their buildings while others sold their buildings and rented space for less money. The Houston Congregation for Reform Judaism holds a yearly golf tournament and “bark mitzvah” with pet vendors, food trucks, music, a chew toy giveaway and a dog blessing given by Rabbi Steve Gross, who described the day as “a festival for dogs.” Manhattan’s CBST has been seeking grants. All the while, synagogues try to support their congregants even as they struggle themselves.

The synogages that eJP spoke to said that they haven’t had to cut staff, often thanks to federal pandemic loans that were quickly forgiven, but they also haven’t been able to grow programs and initiatives as they would like to. Farber said retaining staff is “something that we’ve worked very, very, very hard to preserve because, if anything, going virtual just made our work more difficult, more confusing and required a whole new set of skills.”

Congregation Kehilath Jeshurun, an Orthodox synagogue on the tony Upper East Side of Manhattan with around 1,200 members, sees itself as a community center, fulfilling its congregants’ religious and social needs — even giving its members space to throw birthday parties.

“Especially in Manhattan and a big city where things can feel impersonal… community doesn’t just happen on its own,” said Associate Rabbi Roy Feldman. “Community has to be built.”

Mael believes that “COVID forced all of us to be more relational in our connection to our members because the doors were closed.” If synagogues stay focused on meeting their members’ needs, , he said, members will “will feel connected and committed to supporting the community, even in tough economic downturns. But if people don’t feel connected, synagogues, unfortunately, sometimes, are one of the places [where] people make a choice whether or not to spend their money.”