THE NUMBERS ARE IN

A third of schools have posted enrollment declines, mainly due to geographic shifts 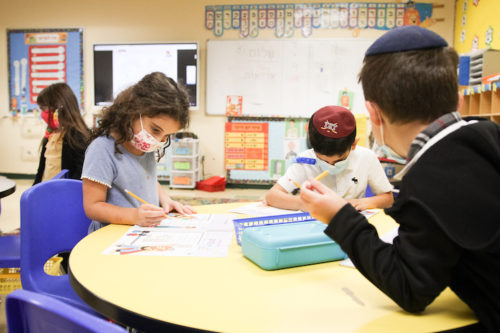 One of the unexpected byproducts of the coronavirus pandemic was a boost in enrollment at Jewish day schools and yeshivas — a nearly 4% increase after more than a decade of declining enrollment numbers, according to Prizmah: the Center for Jewish Day Schools. The increase was driven in large part by the 80% of families who moved their children from public schools into Jewish day schools during the pandemic and decided to keep them there, Prizmah CEO Paul Bernstein told eJewishPhilanthropy.

“These families realized that the experience their kids could have in Jewish day school was an incredibly rich one,” Bernstein said, noting that the families who are staying moved their children originally out of desperation at the deterioration of the quality of education wrought by the pandemic on many public schools.

The total population of day schools and yeshivas served by Prizmah now numbers 85,000 due to the increase of 3,100 new students in the last two years. Philanthropists — both longtime supporters of Jewish schools and newcomers — see the 3.7% increase as an indication that Jewish schools are a good investment, said Ann Pava, who has served as Prizmah’s board chair. In January, she and her husband announced the launch of the Micah Foundation, which is focused on day schools and the expansion of women’s role in the Orthodox movement.

“It’s more enjoyable to invest when something is growing,” she said, adding that Prizmah itself has attracted new supporters, including foundations that have made multiyear commitments.

The study was sent to Prizmah’s network of about 300 schools, of which 146 responded. Non-denominational, pluralistic or Conservative or Reform movement schools comprised 70% of the respondents, while Orthodox and Modern Orthodox schools comprised 30%. Over 20% of the schools are located in the region that includes the Northeast and metropolitan New York, which extends from Maine to northern New Jersey.

At Orthodox and Modern Orthodox schools, enrollment rose 2.5%, while it rose 4.5% at non-denominational, pluralistic and Conservative and Reform movement schools. Enrollment rose the most sharply at community and non-denominational schools, increasing by 5.7%, and by the smallest percentage — 1.6% — at schools affiliated with the Reform movement .

However, a third of schools experienced a drop in enrollment, most often driven by demographic shifts, Bernstein said.

“South Florida is booming,” he said. “We know that. There’s an increase in enrollment there of over 8%. Some schools in New York City are experiencing tough times because people have moved.”

Of the 20% of students who enrolled in Jewish schools during the pandemic but decided not to remain, the top three reasons cited were finances, location and social issues, such as whether a student felt connected to his or her peers.