With more than 560,000 Jews in nearly 300,000 Jewish households, it’s the second largest Jewish community in the United States. 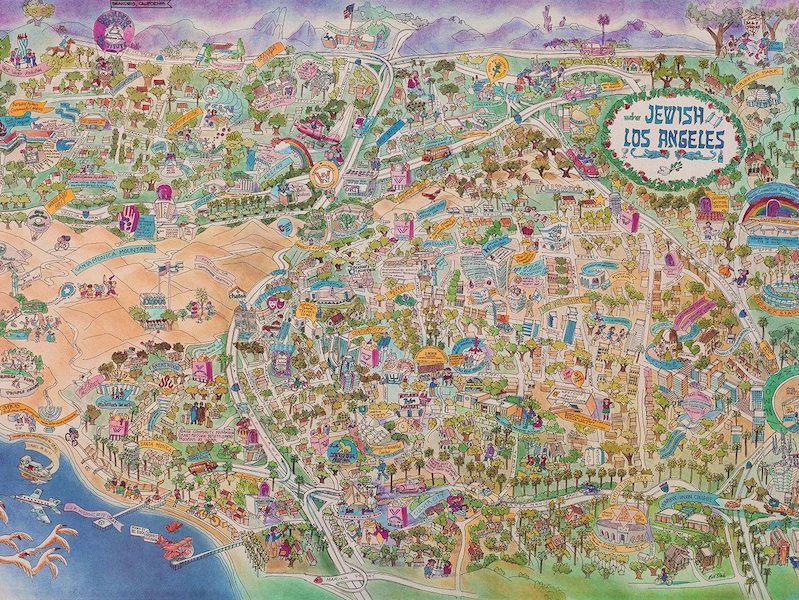 The first population survey of the Los Angeles Jewish community in a generation reveals a tale of two cities.

The community is growing, with 25% more Jewish households than there were in 1997, when the last survey was conducted. But part of it is lonely: nearly a third of households include a single adult living alone. More than half of Jewish adults have had the time or means to travel to Israel, yet nearly one-fifth of Jewish Angelenos are struggling to make ends meet. And when it comes to young Jews, the survey reveals great hope and great heartache: Younger people appear more engaged in Jewish life than their elders, and their Jewish identities are strong. Yet the level of their mental health needs “shocked” Rabbi Noah Farkas, the federation’s CEO and president, told eJewishPhilanthropy.

But while the Jewish Federation of Greater Los Angeles study, the first sections of which were released today,  contains some sobering realities, Farkas is buoyed by its findings, especially as they relate to younger people, and for what that means for the community’s future.

“[It’s] the first time I read a study, where the future looks brighter than the past,” he said. “Affiliation, denominational structures for how to create Jewish identity, synagogue business models, they’re all in decline, but Jewish life isn’t in decline. Jewish life is ascending, is rising…. Younger people who are Jewish and living in a Jewish household in almost every category are more engaged in Jewish life than older people. They consume Jewish media more, they talk about Jewish topics more, they wear Jewish symbols more, they make some version of Shabbat more.”

One way the community has changed can be encapsulated in a single word: diversity. In the last survey of Los Angeles’ Jewish population, the word “diverse” appears only once, in the context of geography, while the word “diversity” does not appear at all. The term “Jews of color,” which was then rarely used, was likewise absent, as was “non-white.”

But the new study includes a section titled “Diversity,” and shows that the city’s share of Jewish immigrants and Jews of color is significant and likely to rise.

According to the document, which doesn’t include specific figures on this point, approximately half of Jewish households in L.A. include an immigrant or the child of an immigrant from a range of countries and regions including Israel, Iran, Latin American and the former Soviet Union. By contrast, a Pew Research Center study of all American Jews last year found that roughly a third were immigrants or children of immigrants.

And while 6% of L.A. Jews identify as Jews of color, the number rises to 9% among children considered by their parents to be Jews of color.

“We’re really getting a better sense of the diversity of our community, and so I think this is a better study because of it,”  Farkas told eJP ahead of the report’s release. “L.A. for decades has always been a diverse community and continues to be even more so.”

The study was conducted by Brandeis University’s  Cohen Center for Modern Jewish Studies and the University of Chicago’s National Opinion Research Center between June and September 2021. It includes responses from 3,767 eligible households and has a margin of error of 5%. It cost roughly $2 million to produce.

The federation will be releasing several more sections of the survey in the coming months, as opposed to producing one long document. The subsequent sections will focus on Jewish education, attitudes toward Israel, community connections, antisemitism and communal engagement.

“We really wanted it to be accessible and digestible and action-oriented,” said Shira Rosenblatt, the federation’s associate chief program officer and its point person on the study. She said that in order to capture a broad spectrum of Jewish Angelenos, the federation conducted “input conversations” with different sectors of local Jews to let them know the study was coming and to find out how to phrase questions in an accurate way. She added that researchers employed “a host of different ways of finding people” to make sure to reach Jews who aren’t involved in mainstream Jewish institutions.

The study found that L.A.’s Jewish population is large and growing. With more than 560,000 Jews in nearly 300,000 Jewish households, it’s the second largest Jewish community in the United States. Since 1997, the number of Jewish households has grown 25%. Nearly half of the city’s Jewish adults are older than 55, and about  25% of households include children younger than 18. About 30% of the households include a single adult living alone, while about 70% of Jewish adults are married or partnered. Some 57% of those couples are intermarried, comparable to the national Jewish intermarriage rate.

The percentages of Orthodox and Conservative Jews in L.A. (7% and 15%, respectively) is similar to national Jewish figures. By contrast, while more than a third of U.S. Jews overall identify as Reform, the same is true of only 25% of Jews in L.A. Rather, fully half of the area’s Jewish population does not identify with a denomination.

But the survey doesn’t focus on denominational identity when analyzing the community. Instead, it divides respondents into five categories, ranging from “immersed” (17% of respondents), or those who participate in a wide range of Jewish activities and observances; to the “minimally involved” (23%), who do not. In between are “ritual” Jews who observe Shabbat and holidays (16%), “communal” Jews who are involved in Jewish groups and causes and consume Jewish culture (16%), and “holiday Jews” who celebrate Passover, Hanukkah and occasionally Shabbat (27%).

The “minimally involved” Jews are disproportionately unaffiliated, have higher rates of intermarriage and are less likely to say being Jewish is very or extremely important to who they are. But Farkas said the survey depicts a vibrant community whose members demonstrate a wide range of ways to be Jewish.

The survey also found that the percentage of “minimally involved” Jews rises with age, from 11% of those ages 22 to 30, to 39% of those older than 75.

“[It’s] the first time I read a study, where the future looks brighter than the past,” he said. “Affiliation, denominational structures for how to create Jewish identity, synagogue business models, they’re all in decline, but Jewish life isn’t in decline. Jewish life is ascending, is rising…. Younger people who are Jewish and living in a Jewish household in almost every category are more engaged in Jewish life than older people. They consume Jewish media more, they talk about Jewish topics more, they wear Jewish symbols more, they make some version of Shabbat more.”

That doesn’t mean Jewish institutions should give up on Baby Boomers and Gen Xers, Farkas said, adding that the finding that Jews 55 and older tend to be less actively or engaged Jewishly may demand investment in that population.

“If you take it as a presupposition that we invest in Jewish engagement and that creates Jewish engagement, then perhaps we need to create evolving forms of Jewish expression for the older Gen Xers and Boomer crowd like we did for the younger generation,” he said.

Two other “shocking things” to emerge from the survey, Farkas said, are the level of need surrounding mental health care and loneliness among young people, and persistent Jewish poverty.  The report found that 23% of Jewish households include someone with a chronic health issue, mental health issue, special need or disability that may limit work, school or other activities. Six percent reported that someone in the household has a severe and persistent mental illness, and 30% reported that someone in the household requires mental health or substance abuse treatment.

In addition, the survey found that nearly one-fifth of Jewish households are struggling financially.

“Eighteen percent of our community is just managing to make ends meet,” Farkas said, noting that COVID-19 exacerbated economic challenges for close to half of the financially struggling households.

The survey also found that more than half of Jewish adults in L.A. have been to Israel, with 65% feeling “somewhat or very attached to Israel.” More than 80% of all Jewish adults consider caring about Israel to be an important part of being Jewish.

The federation didn’t ask directly questions about how its investment in specific programs —like Birthright Israel or campus programming — correlates to respondents’ engagement. But Farkas said the report appears to encourage better communication and partnerships with synagogues, which he said were historically “the primary dissemination point of Jewish life.”

But he cautioned that the federation has not set out a specific action plan yet, because the federation plans to let the survey data inform its goals, “as opposed to writing goals and then trying to shoehorn data into those goals.”

“The federation itself is going to be engaging in data-driven, data-leading decision-making, and we want to partner with the hundreds of Jewish organizations in town to assist them in the same process,” he said. “That is part of what we do and this study is just the beginning.”