Some of the universities that were represented have been the subject of federal complaints alleging that their campuses were hostile to Jewish students. 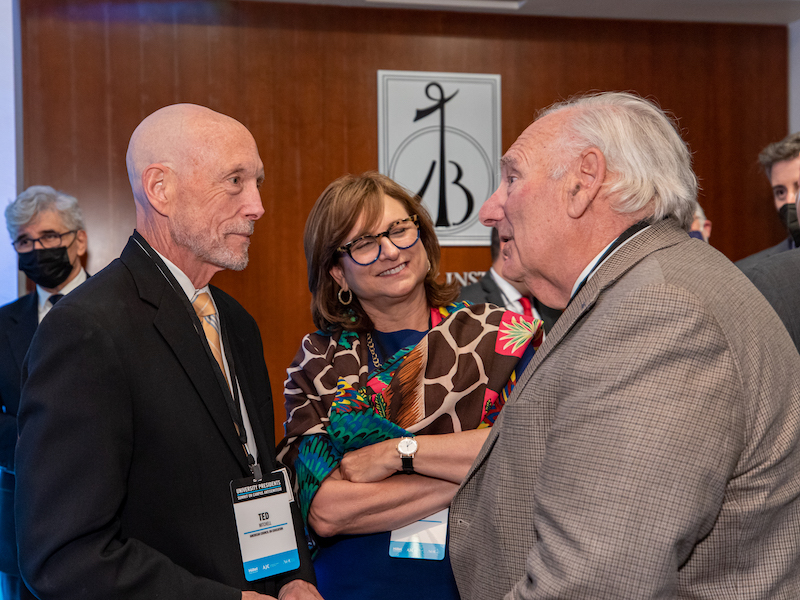 Ted Mitchell, president of the American Council on Education (left) speaks with participants at a meeting of college presidents to discuss combating campus antisemitism.

When Jewish college students and the national organizations that aim to speak in support of them encounter antisemitism or anti-Zionism on campus, they often see the office of the college president as their last, best hope.

College presidents have consistently rebuffed student government resolutions endorsing the movement to boycott, divest from and sanction Israel, known as BDS. They have disciplined professors who have gained attention for anti-Israel and antisemitic speech and have made public statements condemning antisemitic incidents on campus.

On Monday and Tuesday, nearly 40 of those college presidents — including some from campuses that have seen high-profile anti-Israel or antisemitic activity — gathered at the Center for Jewish History in New York City to share best practices and discuss how best to create a safe environment for Jewish students. The conference was organized by Hillel International and the American Jewish Committee (AJC) along with the American Council on Education.

University of Illinois Chancellor Robert Jones spoke to his peers at lunch on Tuesday in what he described to eJewishPhilanthropy as an “off-the-cuff” speech. Jones’ school, Illinois’ flagship campus, was hit with a Department of Education investigation of alleged antisemitism in late 2020. Days later, the university released a statement co-signed by the school’s Hillel, Chabad, the Chicago Jewish federation and other stakeholders pledging to fight antisemitism.

Jones would not comment to eJP on the status of the federal investigation but said that, per the 2020 statement, the school has set up a council of faculty, students and Jewish communal stakeholders to address and seek to prevent antisemitism on campus. One concrete development Jones pointed to was an educational curriculum on antisemitism developed with the help of the Anti-Defamation League that, he said, has gained broad buy-in on campus.

The gathering was intimate by design, largely closed to the press and without a public program. Instead, the university presidents spoke to each other about their experiences, and joined discussion groups to talk through different approaches to combating antisemitism. Attendees also heard from some Jewish students.

Unsurprisingly, every speaker in the program’s public portions, like Mitchell, stressed that antisemitism on campus was an urgent problem, though not all ventured specific measures to address it. One who did was Hillel International CEO Adam Lehman who, in an address Tuesday, called on schools to educate students about Jewish identity and antisemitism and to explicitly include Jews in their diversity, equity and inclusion (DEI) policies, which generally address topics like racial identity, gender and sexual orientation.

“Our appeal to you today is not to ignore or reduce your deep commitments to fighting racism, gender-based discrimination, and all other forms of inequity and injustice,” he said. “It is simply to see our Jewish students – in all of their diversity — as also fully deserving of your attention and concern.”

Multiple speakers, including Rep. Ted Deutch (D-FL), the incoming CEO of AJC, encouraged schools to use the International Holocaust Remembrance Alliance’s working definition of antisemitism, which has been adopted by more than 800 entities globally, including some universities. The definition has sparked controversy on some campuses, as pro-Palestinian activists have charged that it could inhibit political speech on Israel. Deutch rejected those concerns.

“I’m a staunch advocate of the First Amendment. I take seriously the free exchange of ideas as protected by the Constitution,” Deutch said in his speech Monday night. “When the goal is to open up a meaningful dialogue, tools like the IHRA definition don’t commandeer that process, they don’t dictate how difficult conversations can happen, they illuminate what certain words mean.”

Also speaking on Monday night were Reps. Grace Meng (D-NY) and Lee Zeldin (R-NY), who are both — like Deutch — members of the House Bipartisan Task Force for Combating Antisemitism. The next day featured a panel with executives from Hillel International, AJC and the Foundation to Combat Antisemitism.

Meng, who is not Jewish, emphasized education on antisemitism, and said some students who engage in prejudice against Jews may not understand why their actions or words are bigoted.

“We cannot assume that everyone understands or appreciates the history of the Jewish people in this country and in the world,” she said. “A lot of times I find, when we talk about Israel… all people think we talk about are military and defense, and of course that’s important, but this also is coming from many people who think that foreign aid is like 90% of our budget. These are simply misconceptions that need to be addressed.”