Kanye was invited to tour a Holocaust museum. Would it have worked? 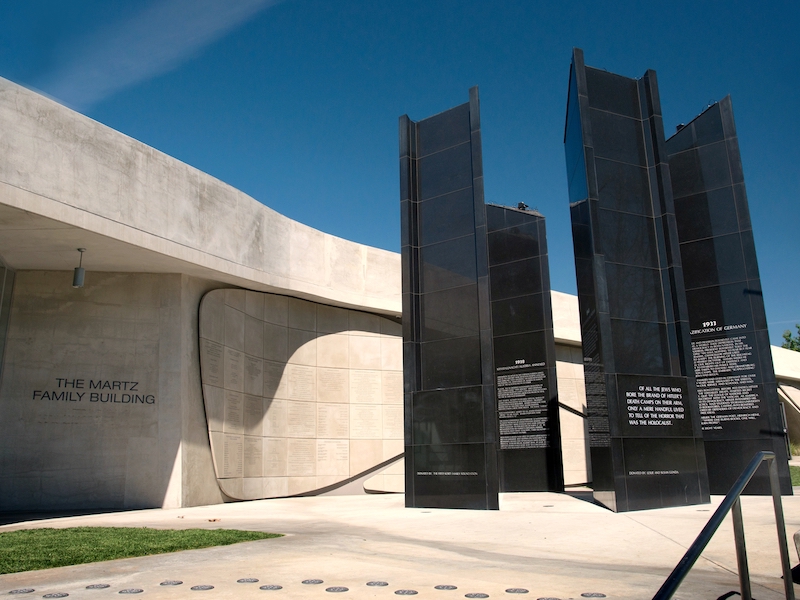 courtesy of The Holocaust Museum LA

Near the beginning of Kanye West’s weekslong antisemitic tirade, the Holocaust Museum LA turned to a familiar approach: inviting him to see the worst consequences of Jew-hatred, and the conditions and conspiracies that led to the Nazi genocide.

It didn’t work. West, who goes by Ye, declined the invitation, and the museum instead received a stream of hate online.

“We reached out to his former reps at CAA,” Beth Kean, the museum’s CEO, told eJewishPhilanthropy, referring to the talent agency, Creative Artists Agency, that until this week represented West. “We like to look at this as a teachable moment — you know, come look at the facts… We got some hate remarks, people saying they stand with Kanye, very similar to the banner hanging on the 405 [freeway, hung by neo-Nazis] that said ‘Kanye was right about the Jews.’”

Asking that public figures — especially those accused of antisemitism — visit Holocaust museums is common practice across the Jewish world. Foreign dignitaries make a de rigeur visit to Yad Vashem, Israel’s Holocaust memorial and museum, when they travel to Israel. After antisemitic street attacks surged in New York City in 2019, the city allocated funding for middle and high school students to visit the city’s local Holocaust museum.

But such visits don’t always change minds on their own. In 2018, after accusing the Rothschilds of controlling the weather, Washington, D.C., Democratic Councilmember Trayon White visited the U.S. Holocaust Memorial Museum — but left halfway through the tour. In 2021, Rep. Marjorie Taylor Greene (R-GA) visited the same museum and apologized for repeatedly comparing COVID-19 mandates to the Holocaust — then resumed making the comparisons weeks later.

Sara Bloomfield, the longtime director of the USHMM, told eJP that “Holocaust education can contribute… to developing anti-antisemites, but I also think we need to be realistic” about the limits of one visit to a Holocaust museum for someone who is already antisemitic.

The museum had 1.7 million annual visitors before the pandemic, and while Bloomfield said visits are valuable for “people who might be susceptible to antisemitic views,” particularly young people, she doesn’t see the museum on its own as a cure-all for millennia of antisemitism, which she feels “requires multiple approaches.”

“I think once somebody has fixed antisemitic views… my sense of it is that it’s a very hard thing to change, and I personally would highly doubt that a visit to a Holocaust museum can do that,” she said. “For an antisemite to rethink their views, it’s most likely a very long and probably a private process.”

Regarding the high-profile visits of public figures, she added, “We make no claims for what any visit will accomplish. That’s not for us to do. These visits are private affairs. We don’t publicize them. If other people want to publicize them, that’s their private business. Our goal is just education. We’re not here for publicity or moral cleansing.”

Ambassador Deborah Lipstadt, the U.S. special envoy to monitor and combat antisemitism and one of the world’s most prominent Holocaust historians, addressed the limits of Holocaust education in combating antisemitism during a speech in France this week. “I’m not sure it’s the great inoculator that we think it is,” she said. “And yet it is crucially important to teach it.”

She added that the history has “got to be taught in a context of the facts, but also how the Shoah began with words.”

Kean stands by the impulse to invite West, both because of his outsize following on social media — he has 30 million Twitter followers, roughly double the number of Jews in the world — and because she wants to make sure he understands the way statements like his created a fertile ground for genocide. The Holocaust Museum LA serves 50,000 visitors per year and is embarking on a major expansion.

“He’s perpetuating false narratives, and the people who are following him — they’re ignorant, they don’t know, they’re not educated about this,” she said. “When you have such a big platform like that you have to take responsibility and be held accountable for your actions… People like Kanye probably don’t even understand that these words, the stereotypes, the antisemitic tropes, these false narratives, the propaganda that promotes racism, the violence, it’s a slippery slope.”

Aviva Miller, U.S. director of the Auschwitz Jewish Center Foundation, which brings tour groups to a rehabilitated synagogue, museum and campus in the Polish town adjacent to the infamous concentration camp, said that despite the potential pitfalls, nothing illustrates the danger of hate more acutely than visiting Holocaust museums or concentration camps themselves.

“When it’s in your face, and you’re physically in front of it, you can’t run away from it,” she said. ”When you sensitize people to the fact that somebody who you say was on top of the world was once murdered and tried to be obliterated from the face of the planet, and you see it in your face, it’s really hard for you to then come out against them and say, ‘Yeah, but they run the media.’”

Miller isn’t worried that relying on Holocaust education as a tool to combat antisemitism could lead to Holocaust denial. “I’d rather someone be using the word ‘Holocaust’ as an opening line to say, ‘What is that?’” she said. And while she acknowledges that people who visit Holocaust museums may still retain antisemitic attitudes, she hopes it opens the door to change.

“I would hope it would have a transformational effect on some aspect of what their fear is about,” she said. “You see that Jews were rounded up, put on trains and sent to gas chambers. Do you really want to go and hate them so much?”

Kean is no longer holding out hope that West will walk through her museum’s doors. But in the wake of the controversy, some visitors did lift her spirits: Two teachers brought their classes to the museum last week, unannounced.

“The teachers felt this urgency,” she said. “Like, ‘I gotta bring my students to the Holocaust museum.’”