Over half-a-million Soviet Jewish soldiers fought in the regular armed forces and another 100,000 with the partisans and resistance fighters. By the way, Soviet Jews were not the only ones. Fully 50% of all age-eligible Jewish males alive at that point, a total of 1.5 million Jewish soldiers in the world carried arms for their countries against the Axis powers!

The Soviet Union used to mark the victory over Nazi Germany on May 9th each year; it was a day later than V-Days celebrated by the other victors in WWII – the U.S., United Kingdom and France. The explanation for this minor but significant disparity had to do with the fact that Prague — the capital of Czechoslovakia — was liberated on that day, a day later than when Germany formally surrendered. It was – supposedly – a gesture of solidarity with the country that had been sacrificed to Germany on the altar of appeasement before WWII got underway. It was also Stalin’s not-so-subtle way of painting himself as the liberator of Europe, and it was the justification for annexing all of Eastern Europe to the Soviet Union’s domain as the spoils of Victory.

May 9th and the entire story of WWII – referred to by the Soviets as “Second Great Patriotic War ” (the first one being the war against Napoleon in 1812) – are fundamental to any attempt to understand how Russia came to be the country it is now, with the leadership of a maniacal, power-mad and sociopathic dictator who fashions himself very much as a successor to Russian emperors of like qualities – Ivan The Terrible; Peter The Great; Stalin, The Father of the People. 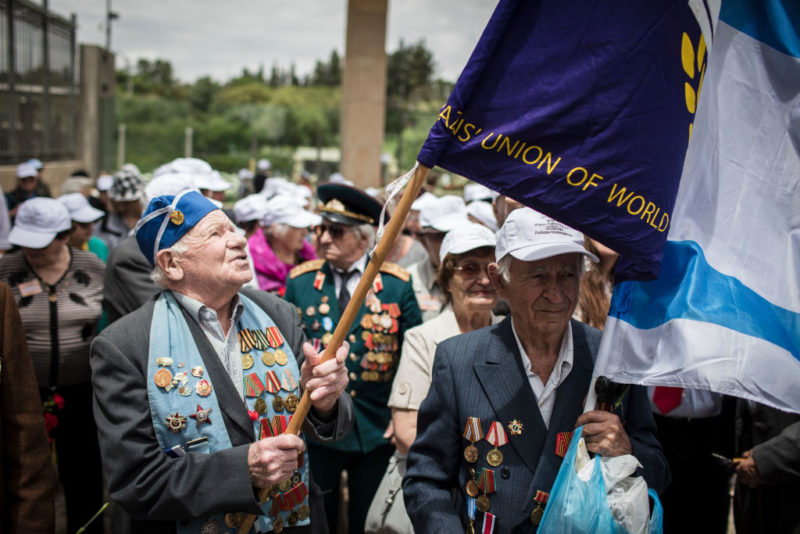 Shall we call him Vlad The Vile?

My entire childhood, and that of every Soviet citizen starting in the decade of 1940s and continuing uninterrupted through the dissolution of the Soviet Union (and returning with vigor and enhanced special effects since the return of the KGB/siloviki elite to power) was filled with images, books, films, monuments, commemorations, parades, TV shows, video games etc. focused on glorifying the Soviet victory in the Second Great Patriotic War. And little wonder: perhaps as many as 20 million lives were lost in those 4 years – about half to Hitler’s murderers and about half to Stalin’s in GULAG camps where Soviets who happened to have been captured or encircled by the Nazis were sent because they could not be trusted. If they didn’t die fighting Germans, they must have been traitors and deserve to die anyway.

It was, indeed, a heroic struggle by the Soviet people. Ill-equipped, with the best of their commanders imprisoned or killed for the fear of being a threat to Stalin, wholly unprepared for war with the regime that Stalin had signed a peace treaty to grab for the Empire a piece of Poland, of Finland and the Baltics:  the soldiers, partisans, men and women, children and elderly all fought, worked, starved and did everything that could and could not be done to defeat the Nazis.

Over half-a-million Soviet Jewish soldiers fought in the regular armed forces and another 100,000 with the partisans and resistance fighters. By the way, Soviet Jews were not the only ones. Fully 50% of all age-eligible Jewish males alive at that point, a total of 1.5 million Jewish soldiers in the world carried arms for their countries against the Axis powers.

I never met a family from Russia or Ukraine that didn’t have someone, and often more than one someone who fought in the War. In addition to the 6 million Jews who perished in the Holocaust, another half million, at least, died fighting on the battlefields.

No wonder then, that even after making aliyah to Israel, or settling in Germany or immigrating to the U.S., the Soviet Army Jewish veterans would gather for the May 9 Victory Day celebrations, proudly wearing the colorful rows of medals on old uniforms or dress suits.

World War II rallied the nation and seemed to hold the promise of better days ahead. It became the subconscious underpinning of the Russian belief in the inevitability of victory over whatever odds and any enemy. It was, in the way it was relentlessly preached and consciously and subliminally propagandized, the same fate and patriotic spirit that defeated the Swedes, the Mongols, the Poles, the French, the Prussians – anybody who would dare question the Russian specialness and great nation status. It was not just a world war or even just a Patriotic War, it was a GREAT Patriotic War.

May 9th is very special.

Symbols are very important – Stalin ordered the recapture of Kyiv to be effected in time for the celebration of the Bolshevik Revolution Day in 1944, and tens of thousands of Soviet Army soldiers drowned in the Dnipro River to make it happen – even though a more appropriate and well planned operation could have been carried out a few weeks later without such enormous loss of life.

Seems like Putin is about to pull off something similar: bomb, destroy, murder in order to declare victory in time for the May 9th celebrations.

The pictures of Nazi flags being dumped in front of Lenin’s mausoleum on Red Square as the original Victory Day Parade was going on became iconic and were shown again and again in movies, commemorations and during consequent parade broadcasts. The ballistic missiles, tanks and goose-stepping ranks of the military marching through the Red Square every year since were a demonstration and a reminder of the mighty Soviet Power.

Now Putin wants to add symbols of victory over Ukraine.

May Putin’s efforts have a similar fate to Hitler’s.

And may we be able to celebrate Ukraine’s independence and peace in the years to come.