The sky had just opened up and we were in the midst of a fairly typical July rainstorm, or what we lovingly refer to in camp as “liquid sunshine.” In the course of helping everyone move to cover, Shira (a 9-year-old camper) was having a conversation with her counselor, Dor. Shira was crying and Dor, a 23-year-old shaliach (Israeli counselor), was trying to help her calm down. Shira was sad because the rain had curtailed her time playing ball with her friends. In this moment, Dor did exactly what he had been trained to do:

Throughout the entire interaction, Dor and Shira only used Hebrew. 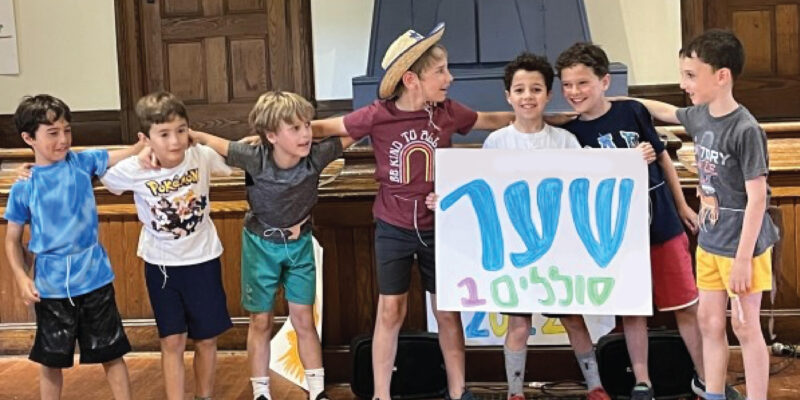 As we celebrate 10 years of the Sha’ar program at Ramah Nyack, we want to add our voice to the conversation that Hunter Boyer started earlier this week in eJewishPhilanthropy. Hebrew education presents in diverse ways across the field of Jewish camp, and we are excited to share what we have developed and learned at Ramah Nyack and at the other Ramah day camps. As an educator, there is nothing in my career that I have done that brings more pride than the development and growth of Sha’ar.

A decade ago (2013), Ramah Nyack piloted Sha’ar for 17 children entering kindergarten who were non-native Hebrew speakers. This past summer (2022), the program enrolled 151 campers from kindergarten through 5th grade. The model that we developed at Ramah Nyack, with initial seed funding and thought partnership from the Areivim Philanthropic Group, has now been launched at the other Ramah day camps and at over a dozen other camps around the country. During the 2022 camp season, 1,350 campers participated in these programs across 20 camps.

At the most basic level, Sha’ar is a summer day camp program conducted in an immersive Hebrew environment. Counselors, mostly Israeli, commit to speaking entirely in Hebrew to their campers — no English — though campers can always express themselves in any language they choose. Campers play, swim, dance, transition between activities, and even eat in a Hebrew environment.

At a higher level, there is much more going on than meets the eye. The Sha’ar program was designed in partnership with educators from Middlebury College’s Language Schools and is based on the proficiency approach to language acquisition, regarded as the gold standard in the field of language education. This approach immerses campers in a natural Hebrew environment where they can quickly apply their skills to real-life situations. Counselors are trained in this approach, which encourages active participation and language production.

We have consistently noted that we begin to hear language production from most campers during the third week of camp. Language production continues to grow throughout the summer. These results are lasting. We have consistently seen that within the first two weeks of the summer, returning campers — regardless of Hebrew usage during the year — are back to the same level of Hebrew proficiency that they had obtained at the end of the previous summer.

Passing food during lunch, kicking a ball during sports, and drawing with various art supplies all become rich opportunities for language comprehension and, eventually, production. Camp has become a Hebrew language playground and the campers are “wrapped in the language” for the summer.

As noted in previous studies by Rosov Consulting, Sha’ar campers gain a significant increase in their Hebrew fluency and a deeper appreciation for Israel and Israelis. The Rosov reports also indicate that 98% of Sha’ar parents believe that participation in this program helps campers form early and enduring relationships with their Israeli counselors and Israel in general.

The growth of Sha’ar has necessitated hiring significantly more shlichim each year for our camp and for other camps’ Hebrew immersion programs. This increased dependency on Israeli staff members challenges us (with logistics, finances, visas, etc.), but the entire camp community benefits tremendously from this program. Dozens of passionate young staff members have now participated in Sha’ar and have been trained in this language education methodology.

Sha’ar now accounts for 20% of the Ramah Nyack camper population each summer, with similar percentages being seen in the other Ramah day camps as the programs grow. This large Hebrew immersion cohort (campers and staff) also continues to have a corollary impact on the usage of Hebrew and the connections to Israel in the general camp population. It is inspiring to be in such a language-rich environment and we routinely see North American staff members push themselves to improve their own Hebrew abilities, further enhancing the already deep relationships that develop between the Israeli and
North American staff members.

Each summer, the Sha’ar team collaboratively creates an all-encompassing, pure Hebrew environment for campers and their young adult counselors. Sha’ar has allowed us to significantly elevate Hebrew education in our camp and create a stronger bridge between the North American and Israeli Jewish communities via personal relationships.

On a quiet Shabbat afternoon near the end of the summer, I spoke with Dor about the encounter with Shira that I had observed during the July rainstorm. I shared with him that what he accomplished in that moment, in my opinion, was a very high-level display of shlichut (representing Israel as an educator and ambassador). He remarked, “I didn’t understand what Zionism meant until I left Israel and came to camp this summer.” Shlichim have routinely reflected on the impact Sha’ar has had on them and their understanding of both shlichut and tzionut (Zionism). Dor, Shira, and hundreds of others left camp this past summer enriched by Sha’ar, ready to re-enter the world with greater Hebrew abilities, a deeper connection to Israel, and relationships across the continents that will last a lifetime.

Rabbi Ami Hersh is the director of Ramah Day Camp in Nyack in Nyack, New York.