At its national summit, IAC hopes participants get beyond politics

The conference’s estimated 2,700 attendees will attend sessions and events that range from Israel-Diaspora ties to entrepreneurship and women's leadership. 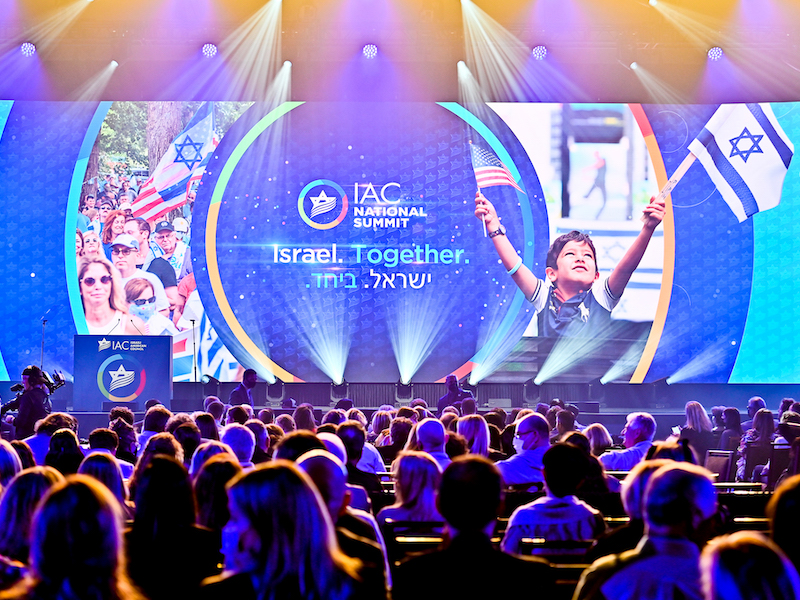 A session at IAC's last national conference, in December 2021.

A sequence of marquee speakers such as that would generally be expected at a major Jewish conference. But Fingerhut and Almog were recently among the signatories of a high-profile letter to Israeli Prime Minister Benjamin Netanyahu expressing “deep concern” about the government’s approach to Israel-Diaspora relations and related issues.

The title of that Saturday morning session is “Stronger Together – Israel and Jewish America,” which is also a summary of the conference’s aspirations, according to Shoham Nicolet, IAC’s CEO. Nicolet told eJewishPhilanthropy that he assumes the three-day conference’s events will feature participants airing their differences over Israel’s new government, whose proposed changes to Israeli immigration and conversion policy have alarmed some American Jewish leaders. But the gathering’s goal, he said, is to find the common ground among attendees, and Jews more broadly.

“I’m sure at the conference there are going to be debates and things will be discussed; just like any other year, we provide a platform and invite the relevant people to share their opinions, to share their ideas,” Nicolet told eJP.

But he added, “What we need to provide is a space where we can come together, we can celebrate, so you have an opportunity to later discuss all kinds of issues.” He said the conference’s goal is “to bring people together to feel as one, and to create an environment where people feel that, and a sense of belonging.”

The conference’s estimated 2,700 attendees will attend sessions and events that range beyond the often thorny topic of Israel-Diaspora ties — including sessions on women’s leadership, antisemitism and Israel in the year 2033. There will be special programming for teens and college students. And the summit will feature performances by Israeli pop star Noa Kirel, the collective singing group Koolulam and the Israel Defense Forces Band.

A special focus will be placed on business and entrepreneurship in sessions throughout the conference. The summit will feature an “Israel America Business Playground” that will host conversations with people from the worlds of tech, economics and business.

Beyond Chikli, political speakers at the conference include Texas Gov. Greg Abbott, a Republican, and Elan Carr, who served as the special envoy for monitoring and combating antisemitism under President Donald Trump (who addressed the conference in 2019). On the other side of the aisle, Nevada Sen. Jacky Rosen, a Democrat, will deliver a video message. Nicolet said IAC invited President Joe Biden and several people in his administration, including Carr’s successor, Ambassador Deborah Lipstadt, but they could not attend due to scheduling conflicts.

No one from the parties currently in Israel’s opposition will be appearing at the conference. Nicolet said that IAC, as a policy, does not opine on internal Israeli politics. He noted that former Defense Minister Benny Gantz, who was serving under then-Prime Minister Naftali Bennett and is not aligned with the current government, addressed the last conference, in December 2021. That conference did feature a lawmaker then in the opposition and now in the coalition, Likud’s Nir Barkat.

“We don’t invite people based on their party or anything else,” Nicolet told eJP. “The minister of diaspora affairs is relevant for this summit. He is the relevant person to speak with about all the issues that are relevant to our community… It’s not about coalition and opposition. The purpose here is not to bring someone from the coalition, it is to bring the minister that is responsible for this specific community.”

IAC’s conference is one of the largest Jewish gatherings of the year, and the organization’s budget is approximately $20 million, with the largest donor being the Adelson family, which has donated extensively to Republican candidates — though less so since Sheldon Adelson’s death in 2021.

Nicolet told eJP that he hopes the group and its core constituency, Israeli Americans, could help bridge the divides, whether on politics, religion or culture, between Israeli and American Jews.

“There’s sometimes gaps between Israelis in Israel and Americans in America just because of the language,” he said. “Again, not the languages of Hebrew and English, but to understand the culture and so forth, and the complexities.”

Nicolet understands that those complexities, and the gaps they stem from, will likely come up during the conference. But he hopes attendees can get beyond them.

“Talking about politics is part of Israeli culture,” he said. “They talk about politics, they debate… but you cannot only debate all the time. You cannot always refer to politics. There’s a place for it, but it cannot be the only thing we do.”