Ally: UpStander. Partner. Advocate. We must train them. Now.

In early January 2019, I sat in the homes of three Jewish teenagers from Atlanta to engage them in a deep discussion with the goal of creating a portrait of them: their self-schema, their Jewish identity and the intersection of those. It was during that time that I first learned not only how rampant JewHatred (aka antisemitism) was in their casual encounters – in school and on social media – but that it had made them quite apathetic to doing anything about it. Because the teens I was profiling were considered “under engaged” in Jewish life, I turned the line of questioning related to encountering antisemitism to the 15+ Jewish teens (ninth, 10th and 11th graders) that I was teaching in a local weekly Reform supplemental education setting. Not only did this group confirm the prevalence of Hitler jokes online and swastika graffiti littering their schools, but they also corroborated the shrug of indifference and the ultimate apathy. I was stunned. Was this apathy due to our failure as Jewish adults and educators to instill in them the need to speak up and speak out against any form of anti-Jewish sentiment? Was the apathy due to a lack of skills we had given them to use their voices? Was this apathy something that the next generation of Jews was prone to due to a time distance from the Shoah (Holocaust) and a lack of personal connection to this critical event in Jewish history?

Repeatedly, when I asked “why not?” (expecting to hear they were scared to stand out among peers for responding), I heard the same appalling narrative: 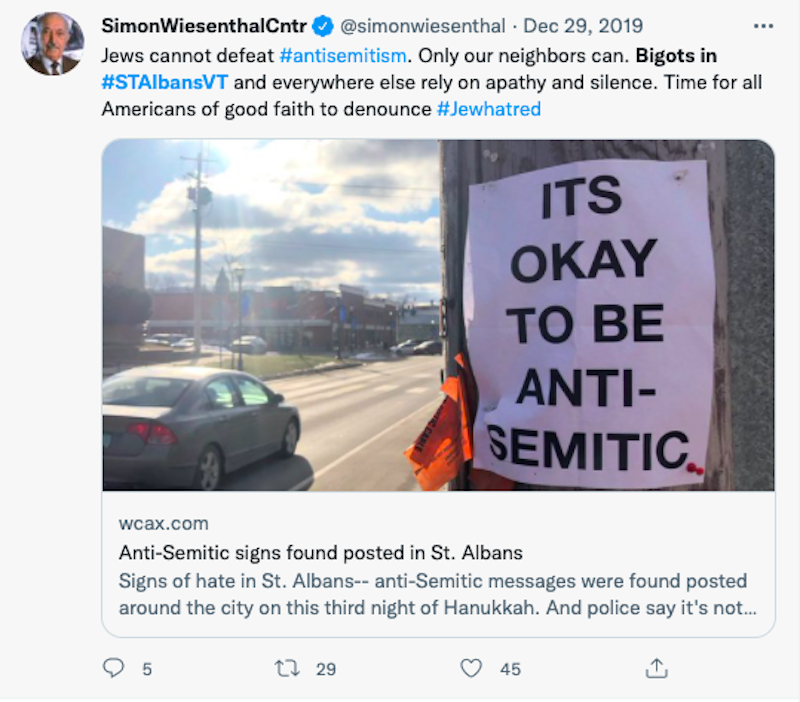 Here are three excerpts from the portrait interviews I conducted (their comments were duplicated repeatedly by the teens in my class). The teens chose pseudonyms for themselves at the start of our work together:

While contemplating how Judaism plays out for her in her school environment, Luna shared:

There are a lot of people at my school who think it’s funny to make jokes about the Holocaust and there are like Nazi symbols in the boys’ bathroom mostly and like on the desks too, and like people don’t realize that that’s not funny.

When asked how she and her Jewish friends respond to seeing these symbols, Luna explained: “There’s nothing that we can do. If we told the school they, like, people have told the school before, it’s just, there’s nothing anyone can do about it because there’s always hate…We do talk about how terrible it is; we don’t like it.” When sharing about social media and Jewish identity, Luna conveyed, “People used to like put them [anti-Jewish content] on like social media, they’d like to put it on Snapchat or something. It’s sometimes not at school and was more of like people sending memes about the Holocaust and Hitler.” Luna reiterated, “I don’t know why anyone would think that’s funny.”

Michael also expressed that his school time is a major category in his life and that he encounters questionable expressions towards Jews at school. Michael said, “That would be jokes…I usually don’t get offended because I understand they are jokes and not intended to offend anyone who’s affected by the Holocaust, at least I hope so.” Despite these interactions with his peers, Michael had a completely different reaction to the shooting at the Tree of Life Synagogue in Pittsburgh. Michael reported: “In October when the terrorist attack on Pittsburgh happened [at the Tree of Life Synagogue], I felt very compelled to speak out. It definitely hit close to home for me…I wanted people to recognize that antisemitism was still a thing.”

As one of a few Jewish players on the football team, Jason and the others [who are Jewish] are nicknamed “Jew” by the others. The Jewish players not only respond to the nickname, but call each other the term as well. Jason explained, “My mom thinks this is a big deal, but I just don’t and she won’t let it go. She doesn’t understand. A teammate wrote ‘Jew’ on this board thing and it’s just a nickname…It’s just a joke.” In a second conversation about the situation, Jason said, “It comes up in the fact that my, my friends and teammates know [that I’m Jewish] and it’s more of a term of endearment. Because not everyone is [Jewish], so they bring it up as sort of like a nickname.” When asked how he feels about his mother and other adult reactions to this, Jason said, “I just feel like if they were in the locker room seeing how everyone interacts with everyone else, they wouldn’t think that it was such a big deal.”

So why am I writing about this now, fall of 2021? Because there was a recent major incident going on in one of the Atlanta suburban school districts (just miles from my home) that needs more attention. Swastikas and the words “Heil Hitler” were found in September in bathrooms at Pope and Lassiter High Schools. The acts occurred during the Jewish High Holy Days.

This is a news report from Sept 22, 2021 about the recent JewHatred at Cobb County Schools outside of Atlanta, GA and the district and community reaction.

Jewish leadership dialogued with board members during a recent Cobb County School Board meeting. Dozens of protestors appeared outside the board meeting (recording here), local rabbis and leaders spoke, and The Atlanta Initiative Against AntiSemitism (AIAAS), the Anti-Defamation League, American Jewish Committee and Jewish Student Union shared a petition which delivered more than 4,000 signatures. One of the demands is the reinstitution of the ADL No Place For Hate curriculum. While the board heard the comments and the superintendent told the crowd that the district will not tolerate hate, and that those responsible are now facing disciplinary charges, most members of the community that I know don’t feel this is enough. [Most recent update from the October 14, 2021 Cobb County Schools board meeting where they passed an antisemitsm and racism resolution.]

What is the solution? In the recommendation section of my dissertation, I put forth the following proposal which involves the education of and the elevation of non-Jewish allies through Jewish education opportunities:

Jew-hatred and “othering” education. In an electronic communication via Facebook on January 21, 2020, the Jewish Community Relations Council, Milwaukee chapter, reported that “Antisemitism has increased 329% from 2015 to 2019.” The study participants relayed varying types of anti-Semitism, Jew-hatred, and “othering” that they experienced from their peers. From Holocaust memes and jokes flowing on social media to swastikas graffitied around their schools, the participants expressed feeling a lack of ability to curtail the problem and the lack of desire to confront the immaturity of their peers. One participant shared that he and his friends consider the nickname “Jew” to be a term of endearment.

While many religious schools may teach about the Holocaust to older students and integrate the need for Jewish youth to confront antisemitism, I am unaware of any pre-teenager initiatives whereby religious schools provide education to their Jewish students, students’ unaffiliated Jewish friends, and students’ non-Jewish friends. Providing multi-faith training to younger students will help prevent the growth and perpetuation of these inappropriate occurrences by young people. Including peers in this education will create a systemic approach to ally-ship and create a significant difference, similar to the role that allies and school-based Gay-Straight Alliances play in the life of their LGBTQ peers (GLSEN, 2007.).

In December 2019, after a series of violent crimes against Jews in New York and New Jersey and other non-violent attacks around the country, The Simon Wiesenthal Center tweeted an assertion that non-Jews have a significant role to play in defeating antisemitism. The center’s stated role as indicated on their website is as follows:

“[A] global human rights organization researching the Holocaust and hate in a historic and contemporary context. The Center confronts anti-Semitism, hate and terrorism, promotes human rights and dignity, stands with Israel, defends the safety of Jews worldwide, and teaches the lessons of the Holocaust for future generations.”

The Teaching Tolerance website provides free education materials for children in grades K–12 and their page explains “anti-bias approach encourages children and young people to challenge prejudice and learn how to be agents of change in their own lives.”

With the abundance of resources available to educators in Jewish schools, Jewish educators can be a catalyst for helping Jewish youth become more confident in standing against these behaviors while creating a peer-allied support system.

While I am adamant, along with others in my local community, that Cobb County Schools MUST act in a significant way – through a restorative justice lens (that’s an article for another day) – and through district-wide education, I am equally as committed to the notion that the Jewish community around the country needs to act – not by solely placing the responsibility on the schools, but by taking concrete steps to launching its own educational ally initiatives to address the problem with Jewish children, adults and their non-Jewish peers.

Robyn Faintich, Ed.D., has over 26 years of Jewish communal experience in areas that include youth movements, day schools, community teen initiatives, congregational education, family education and adult education. In August 2010, Robyn founded JewishGPS, LLC in an effort to help guide Jewish organizations in a variety of aspects of Jewish education. She holds an EdD in K-12 Education at Northeastern University and received a Doctoral Certificate in Jewish Education Leadership from Hebrew College. Her dissertation was “Understanding How Under-Engaged Jewish Teens Self-Articulate and Self-Express Jewish Identity and Jewish Identification.”