The sukkah, known as Imkha, is an art installation by Tobi Kahn, the prominent Jewish artist known for making ceremonial objects. 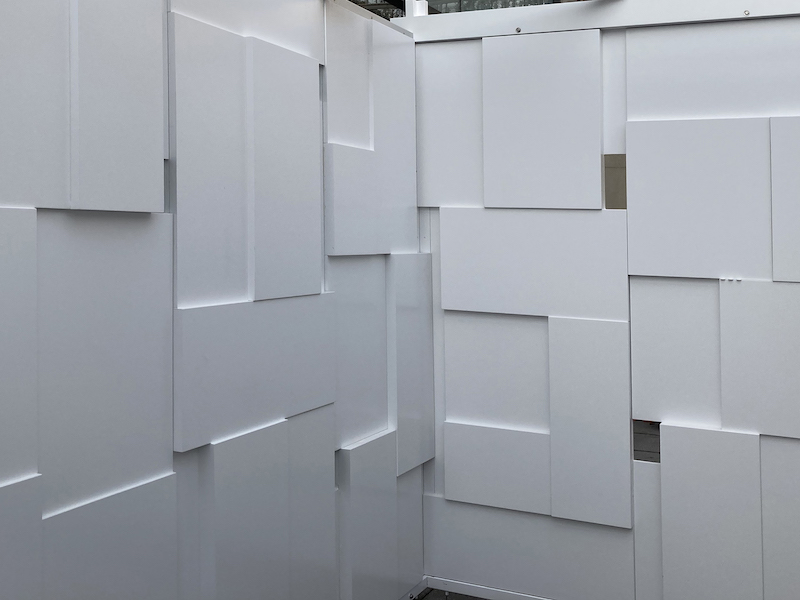 The interior of Imkha, a sukkah created by artist Tobi Kahn.

When Sukkot arrives on Sunday evening, the main event space at Manhattan’s Jewish Community Center will be on the roof, where two large sukkot stand side-by-side, ready to host all manner of gatherings.

But this year, the Marlene Meyerson JCC Manhattan, as the building is known, aims for visitors to also spend time in a smaller sukkah, on the seventh floor balcony, that measures just 9-by-12 feet, and will remain empty of furniture for most of the holiday. That sukkah, known as Imkha, is an art installation by Tobi Kahn, the prominent Jewish artist known for making ceremonial objects.

The sukkah is constructed of 13 white panels of smooth, painted wood, with rectangles jutting out from the walls at different depths. Rectangular holes peek out from between the rectangles, letting light in through the walls as well as through the sukkah’s roof.

Kahn chose white so that sunlight and the colors of the city and nature could reflect off of its walls. Similarly, he intends for the sukkah and the rectangles that make up its walls to serve as a space of reflection and imagination for its temporary dwellers.

“We think of ushpizin, we invite people to come in, and I want all your memories to be there,” Kahn told eJewishPhilanthropy, referring to the traditional Sukkot liturgy that invites biblical figures to dinner each night. “That’s why I wanted it to be white, so you could project your memories onto the wall… To me, Sukkot is very much about memory and bringing in people that aren’t there anymore.”

The project is funded by Zelda R. Stern, a local philanthropist who is on the board of Yeshivat Maharat, the Orthodox women’s seminary in Riverdale, and owns one of Kahn’s Omer counters, an object used to tally the 49-day period between Passover and Shavuot. The sukkah is a tribute to her late husband, Stanley Rosenzweig.

Since last November, the panels that now make up the sukkah’s walls have lined the walls of Makom, the JCC’s meditation studio, where they will return when the holiday ends.

“I’ve always wanted to do a sacred space that was a sukkah, but that was used all year round,” said Kahn. “It wasn’t going to be something that was up for eight days and in a basement for 11 and a half months… All those people that were working out in that room, their memories are there.”