A strategic reset for Jewish community relations and advocacy

Do we dig in our heels with progressives because it used to make sense, or do we pivot and develop new partnerships and strategies that reflect our community’s interests today?

For more than a decade, the primary strategy of the Jewish community relations field has been to build ties to key non-Jewish segments on the political left deemed “fence-sitters”on Israel. An influential report issued by the REUT Group, an Israeli think tank, in 2010 stated that “Israel and its allies should maintain thousands of personal relationships with political, financial, cultural, media and security-related elites.” The report went on to say that “Israel should engage its critics, while isolating the delegitimizers.”

Fence sitters include, among others, segments of the African American community, mainline Protestants, Latinos and LGBTQ activists. The strategy had been to engage these groups on social justice issues that they — and many Jews — care about, and in the process influence their thinking on Jews and Israel. 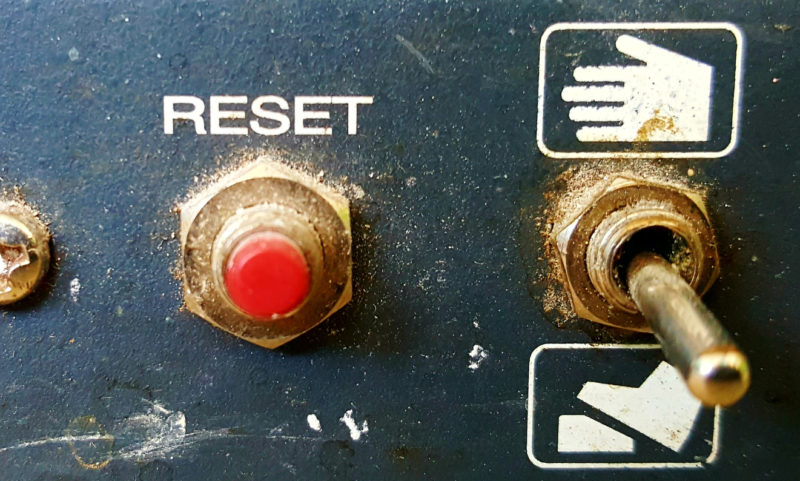 With the rise of the Black Lives Matter movement in 2015, many in the Jewish community, myself included, were especially concerned about the prospect of growing hostility toward Jews and Israel. We worried that a total breakdown would mean many mainstream Jews would become politically disenfranchised. In 2016, as the president and CEO of the Jewish Council for Public Affairs, the Jewish community relations umbrella, I wrote:

“If the (Jewish) community wants to have any influence on how today’s civil rights activists view Jews and Jewish issues, it must show up to the planning meetings, press conferences and protests.”

“We must find our own voice on civil rights. It will not be easy integrating the Jewish community into civil rights coalitions, some of which hold very different political sensibilities. Young activists routinely invoke phrases like -‘white supremacy’ – to describe America’s prevailing power structure…Rather than feeling obliged to use these terms, however, the Jewish community can…come to the table in its own voice.”

This strategy of engaging progressive activists, I am sorry to say, has largely failed. The attitudes toward Israel among progressives have markedly worsened in the past five years. And the prevailing ideological environment has become toxic and fundamentally illiberal. Aligning ourselves too closely with the progressive movement, especially insofar as such alignment requires conformity to its pieties and credos, gives succor to an ideology that will ultimately harm us. It’s time for the mainstream Jewish community to do a strategic reset.

Why the Progressive Engagement Strategy Failed

Many of the civil rights causes supported by the progressive left are no longer consonant with Jewish interests and values. Jewish organizations used to support policies based on notions of equality, which meant that every person was entitled to equality of opportunity. Now progressive forces have largely embraced the concept of “equity,” which, according to Ibrahim X. Kendi, means that any disparity in outcome among groups is proof of racism and white supremacy and needs to be rectified. If some groups are being held down by white supremacy, then others, such as Jews and Asians, are being propped up. Claiming that Asian American success, for example, is attributable to “white adjacency” is perverse and insulting, and endangers a vulnerable minority population. So what’s next: further cutting down to size their children’s participation in tertiary education and magnet schools?

The equity argument is also absurd. Is the fact that there are more female nurses or male coal miners evidence of discrimination? There are clearly a complex mix of factors that explain disparity among groups, including but not limited to racism and sexism. Jewish organizations should explicitly reject this contorted equity concept.

Similarly, the increasingly popular notion of America as a white supremacist state is profoundly at odds with the traditional Jewish outlook. The mainstream Jewish community has always viewed America as an imperfect country striving to live up to its highest ideals. American Jews can believe that there is systemic racism in some quarters in this country without pronouncing America systemically racist. What’s more, this ideology manifestly disempowers people it purports to help. Teaching young people, particularly those in the inner city, that the system is rigged against them is inimical to upward mobility. As the young Black scholar Coleman Hughes argues, “If someone said that black kids should not be encouraged to work hard a hundred years ago, it was probably because they were racist. If someone says the same thing today, it’s almost certainly because they are “anti-racist.”

Unfortunately, these radical social justice concepts are now completely baked into progressive coalition politics. In one meeting with a criminal justice coalition in 2019, I asked point blank: Can people who agree there are major problems with the criminal justice system but disagree that America is a white supremacist country, have a place at the progressive table? Much to my surprise, the answer from the activists was a resounding no. Every single activist considered such a profession of belief de rigueur. Given the choice of engagement or sacrificing core values, we should stick with core values.

Jewish groups undertaking progressive engagement should now realize what may have worked just a decade ago is not working now. It’s hard to argue in light of the scourge of antisemitism and anti-Israelism during the Gaza conflict this past May that we’ve made any headway in checking leftwing anti-Israel sentiment. The ascending ideology innoculates  progressives from  traditional lines of argument, messaging and story-telling from pro-Israel Jews. It renders previously reachable segments of non-Jews (and even Jews) unreachable.

The Jewish community must also contend with how progressive ideology fans the flames of antisemitism. Its fixed view on a hierarchy of privilege legitimizes notions of “Jewish privilege” and power. It erases Jewish identity by insisting that we are “white.”In this conception, Jews are not worthy of self-determination or permitted self-definition. The ideology propagates an anti-Israel binary, dividing human beings into oppressor and oppressed, treating Israel as the perennial victimizer. In its endless race to find the perfect “victim,” Jews and other successful minorities are inevitably vilified for complicity in white supremacy. This ideology is the reason why Jewish women with a Star of David rainbow flag were ejected from the Dyke march in Chicago in 2017, it’s the reason why some progressive Zionist students are denied admission into campus social justice coalitions, and it’s the reason why many Jews are feeling increasingly alienated from their political party of choice and could be rendered politically homeless.

Ominously, the ideology has become downright fashionable, captivating mainstream institutions, such as corporations, education, nonprofits, medicine, law, and, yes, even mainstream Jewish organizations. While it’s true that the Democratic Party has thus far not completely acceded to anti-Israel voices on its left flank, we should not delude ourselves: politics is downstream from culture, and American culture is changing rapidly. There’s only so long the octogenarian Congressional Democratic leadership can hold the line. While British antisemite Jeremy Corbyn may have left the scene of the British Labour Party, his future counterpart in a more ideologically-charged U.S. will likely have more staying power.

The strategic question facing mainstream Jewish groups is: Do we dig in our heels with progressives because it used to make sense, or do we pivot and develop new partnerships and strategies that reflect our community’s interests today?

I’ve thus far addressed challenges from the left because that’s where the mainstream Jewish community is currently positioned. Our liberal democracy, however, is under threat from two distinct anti-democratic political ideologies on each side of the political spectrum. We need to rebuild the center. Steve Windmueller (see his interview below), who has long been a thought leader in Jewish community relations field, recently argued:

A major Jewish political reset is underway at this time, focusing on domestic affairs, foreign policy considerations and the increasing diversity that defines the Jewish communal orbit. When the political environment is as unsettled as we find today, such new structural initiatives are likely to reframe the conversation, refocus policy options, and grow the diversity of the community. These new institutional voices are seeking to establish a middle ground between the political extremes.

David Bernstein interviewing Professor Steven Windmueller on the Jewish Institute for Liberal Values (JILV.org) Speechcast on the need for a strategic reset in Jewish community relations.

Rebuilding-the-Center involves identifying new partners–groups of people who haven’t been overwhelmed by ideological fads and can still talk to one another. Some may be Democrats and some may be Republicans. Some may support mask mandates in schools and others oppose them. Some may favor sweeping healthcare reform and others oppose it. People in this new centrist coalition have one thing in common: they all value democratic norms and liberal values. They vow to protect civil liberties from excesses from both the right and the left. They guard their tongues from extreme and delegitimizing rhetoric. They may be religious or atheists. They extend the principle of good faith whenever possible. They are wary of radical proposals that would fundamentally alter democratic institutions and norms. They are more concerned with helping people than in being ideologically pure. They understand both America’s strengths and its weaknesses, it’s failures and its successes.They are, notwithstanding their differences, capable of working together on a common agenda. 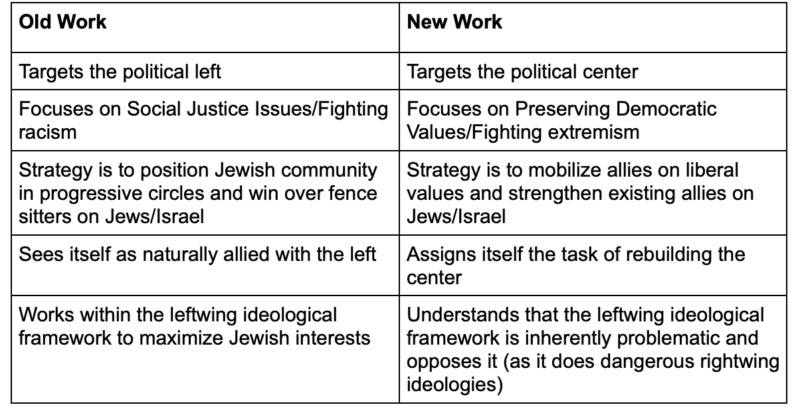 Our new friends may be ethnic communities, such as Asian Americans parents, heterodox Black thinkers, and Latino business leaders. They may be the outliers in their own communities or, just as likely, part of a silent plurality. They are often not the people with the biggest megaphone in their communities. Obviously, none of this will be easy. It will require us to move out of a comfort zone that is no longer comfortable. It will be like moving to a new city and making a new group of friends, not knowing if and when you will feel at home. We can take sustenance from Jewish history, which is full of examples of moving and re-establishing. Our place in the progressive coalition, such as it is, is not sustainable. Neither are most Jews going to find a home in the populist right. It’s time to build a new network.

Some will say that Jewish community relations field is already devoted to Rebuilding-the-Center. Indeed, the idea of “holding the center” is not new. The focus, however, has been squarely on engaging the progressive left. Others will say that these two objectives — reaching out to fence sitters (are there really many left?) on Israel and Rebuilding-the-Center — are not mutually exclusive. Perhaps not, but they are in tension, as there is often a high cost in appeasing progressive demands. On balance, however, I still favor some diversification, with different people doing different work. The Rebuilding-the-Center strategy should become the centerpiece and not the sideshow of Jewish community relations and advocacy.

Our new would-be allies are strikingly similar to the old us: the Jewish community before it became riddled with ideological factions, petty disagreements, and partisan politics. The old us didn’t defer to illiberal ideologies and sacrifice our core principles. We didn’t stifle dissent. We debated ideas in the spirit of Makhloket Lashem Shamayim—arguments for the sake of heaven. In hitting the strategic reset button and engaging these new partners, we may just rediscover ourselves.

David Bernstein is the founder of the Jewish Institute for Liberal Values (JILV). Follow him on Twitter @DavidLbernstein.