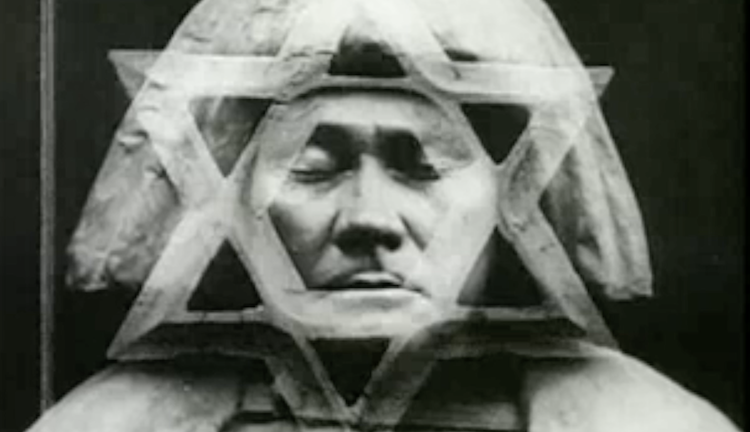 First, Gretchen Gonzales Davidson was a musician, a member of the indie band Slumber Party and a high-profile figure in Michigan’s experimental scene. Now, she’s also a philanthropist, married to Ethan Daniel Davidson, who helped create the William Davidson Foundation, named for his father. Those two identities have merged in a new project she’s helping to create and fund — the rescoring of “The Golem: How He Came Into the World,” a German film about the monster of Jewish folklore, Davidson told eJewishPhilanthropy.

“When I think of the golem, I am reminded of how important it is to be careful of what you wish for,” Davidson said, referring to the golem’s combination of protective and destructive urges. “We need to be mindful of the consequences surrounding the words we say, and the things we create.”

Davidson is a member of the band Threshing Floor, which created the music for the first section of the rescored film. She was also one half of the creative pair who conceived of the idea, which is a project of Reboot, the nonprofit network of Jewish creatives. The other was David Katznelson, Reboot’s CEO, also a musician and music producer.

Finished in 1920 but released in 1921, “The Golem” was directed by Paul Wegener and Carl Boese and based on a novel by Gustav Meyrink. None of the three were Jewish, but other members of the company were, such as Hans Lansberger, who wrote the original score, and actor Ernst Deutsch.

“These people who were in the same troupe at the same time had very different fates,” Katznelson said. “Some joined the Nazis; some fled; some were killed. You’re seeing a moment in history. That goes beyond the film itself.”

Reboot has cut the film, which is in the public domain, into eight parts, and paired each section with music and commentary. In the first one, “Magic and Mystics,” a professor of philosophy and religion examines the mystical spiritual leader Rabbi Judah Loew ben Bezalel, creator of the golem. Threshing Floor, which had come together last spring to create music during Reboot’s all-night online Shavuot event, DAWN, provides the score.

Part of the motivation for “The Golem” project was the band’s desire to make more music together. Reboot was also eager to explore putting music to other silent films, as the group had done this past Passover, for Cecil B. DeMille’s “Ten Commandments.”

Katznelson is a fan of both contemporary horror movies and the emotional, stylized “German Expressionist” school that produced “The Golem.” While web surfing one day, he learned that 2021 was the centennial of the film’s release, which inspired Davidson and Katznelson to move forward with the project, which will be released later this month.

The William Davidson Foundation, along with the Joyce and Irving Goldman Family Foundation, the Jim Joseph Foundation and the Righteous Persons Foundation, is one of Reboot’s major institutional supporters and a source of ongoing operating funds. Davidson also contributed independently to the project, Katznelson said.

Lou Cove, founder of the Jewish arts funder CANVAS, praised Reboot’s rescored “The Golem” on its artistic merits, and as a piece of culture that will enhance and strengthen Jewish life. “Modern Jewish creativity is, by definition, dependent upon the past,” he said. “The results, when they are truly excellent and imaginative, can move us, as Jews, to embrace and reexamine our own identities.”

The movie is set in the ghetto of medieval Prague, where Rabbi Loew has created the golem in order to protect his flock from eviction by the Holy Roman Emperor. It plays on themes of Jewish vulnerability, wisdom, sexuality and cohesion.

Reboot hopes to offer in-person screenings when the COVID-19 pandemic permits, and in the meantime will release it online — on YouTube and its own site, and by tapping into the various niche networks that will be eager to see and listen to it — horror buffs, aficionados of historical film, fans of the many musicians involved in the project and Jews with an interest in their heritage and culture, Katznelson said.

“One of the things that Reboot does is remix the past for future generations to own and find inspiration from,” he said.

The project is hosted by John K. Bucher, creative director of the Joseph Campbell Foundation and Torri Yates-Orr, host of the “Skeleton Keys” podcast. Some 25 people are participating in the effort, including Marika Hughes, a cellist and composer; members of Los Lobos and the Flaming Lips and Jeremiah Lockwood, front man of the band The Sway Machinery, who received training from both blues musician Carolina Slim and his grandfather, Cantor Jacob Konigsberg.