The principal items in the newsletter echo issues that have been raised by a number of other antisemitism watchdogs. 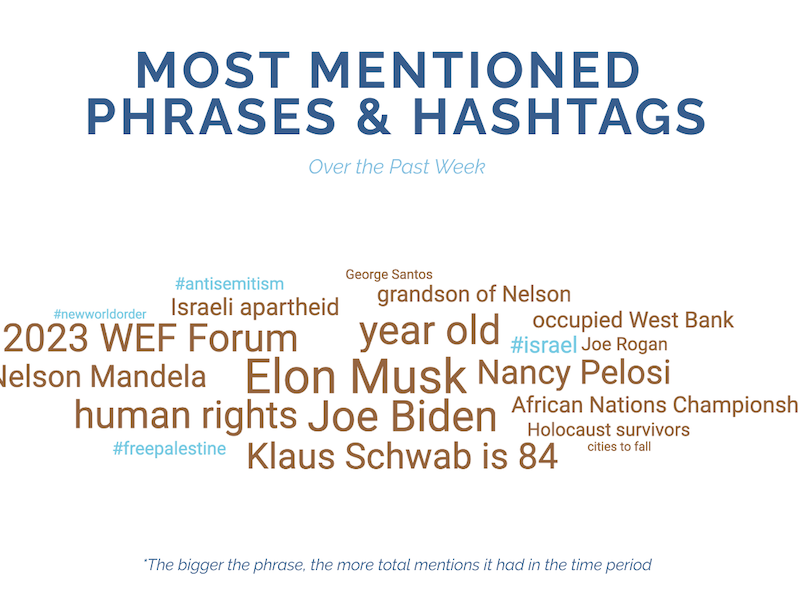 A word cloud found in the newsletter's first edition.

In the lead item of a new newsletter about antisemitism on social media is a screenshot of a tweet that reads, “Anthony Fauci is 84. Klaus Schwab is 84. George Soros is 94. Nancy Pelosi is 82. [Mitch] McConnell is 80. Joe Biden is 80. Imagine how much better off we’d be if they were all in nursing homes.”

At first glance, there’s little if anything about the tweet that’s explicitly antisemitic. Though Soros, the progressive megadonor, is a frequent target of antisemitic conspiracy theories, he’s the only Jew on the list, which states the public figures’ ages — not their religions or ethnic backgrounds. (Fauci, in fact, is 82.)

But a paragraph in the newsletter suggests that the tweet, which has been viewed 3.4 million times, advances the idea that the World Economic Forum in Davos, Switzerland, “is controlled by a secretive cabal of Jewish bankers and politicians who use the organization to further their own interests.”

Presenting and explaining those tweets, and how they and other trending topics might further antisemitic sentiment online, is the raison d’etre of the weekly newsletter, called “From the Command Center,” and published by the Foundation to Combat Antisemitism (FCAS), an organization founded in 2019 by New England Patriots owner Robert Kraft. The foundation, which did not disclose its annual budget, has a total staff of eight and is supported by an endowment of $50 million.

The newsletter’s first edition was sent on Friday to a list of 900 readers, largely professionals and lay leaders in the Jewish community, whom the foundation’s executive director, Matthew Berger, sees as the newsletter’s target audience.

”We want to draw attention to conversations that are happening that include antisemitic tropes and antisemitic commentary, that might not be entirely obvious just from scrolling Twitter or reading Instagram,” Berger told eJewishPhilanthropy. “We want to raise awareness of conversations that are happening that people might not know about just from looking at their own feed.”

The author of the above tweet goes by the name “End Wokeness” and has more than 500,000 followers. Their posts contain anti-vaccine rhetoric as well as conspiracy theories about Gates. Alongside that tweet in the Davos section of the newsletter are screenshots of other tweets, including a poll by Twitter CEO Elon Musk asking whether users think “The World Economic Forum should control the world.”

Overall, the principal items in the newsletter echo issues that have been raised by a number of other antisemitism watchdogs and have taken center-stage in the social media posts of Jewish and pro-Israel organizations and activists. Alongside the segment about Davos, which was the “Headline Topic,” the newsletter contained a section reviewing a pro-Palestinian protest at the University of Michigan in which students called for an “Intifada.” Another was about former Human Rights Watch Executive Director Kenneth Roth, who has repeatedly criticized Israel, being initially denied a Harvard University fellowship he ultimately received, and Roth’s allegation that his fellowship was vetoed because “donors disapproved.”

The newsletter also includes statistics on those topics’ mentions, impressions and reach across a variety of public posts on social media platforms — including but not limited to Twitter, Facebook, Instagram, Reddit, TikTok and the newsletter platform Substack. Friday’s newsletter included screenshots of antisemitic tweets, though Berger said posts from other platforms will show up in subsequent editions.

The newsletter also has a glossary of phrases and how they relate to antisemitic incidents or conspiracy theories. It also features a word cloud of terms the newsletter says are related to antisemitic topics online — though not all of them are obviously antisemitic. Among the biggest are “Elon Musk” and “Joe Biden.”

“We’re providing context and understanding as to what is behind the conversations that are happening on social media and where the hate and antisemitism is coming from,” Berger said. “We’re also providing an understanding of trends and how language and keywords are increasing or decreasing in usage over time.”

In tracking online antisemitism, FCAS is entering an increasingly crowded space. The Anti-Defamation League has long tracked offline antisemitic incidents and regularly releases reports regarding hate on social platforms. The Network Contagion Research Institute tracks and forecasts the direction of hate and disinformation online, recently publishing research showing that spikes in physical attacks on Jews and LGBTQ people correlate with increases in hate speech on Twitter.

CyberWell, an Israeli nonprofit founded last year, describes itself as “the world’s first live database of online antisemitism.” The group also monitors how long it takes platforms to remove content that violates their hate speech policies, and CEO Tal-Or Cohen said in a statement that the data is “a testament to the need for platforms to enforce their standards more rigorously.”

Oren Segal, vice president of the ADL’s Center on Extremism, said the need to track online hate has grown more urgent. “The reality is, to get a full picture of what antisemitism is like and what many in the Jewish community are experiencing, you have to look beyond merely what happens on the ground in communities,” he said. “You need to look at the public discussion, statements by influencers, the language that’s circulating in online spaces.”

As opposed to forecasting trends or monitoring platform compliance, the FCAS newsletter aims to give readers a snapshot of the antisemitism that has been happening on social media over the past week — though Berger said the group hopes to do more real-time tracking in the future.

To identify the trends, the group is working with Brandwatch, a firm that helps companies understand and engage with their customers on social media. Brandwatch did not reply to repeated requests for comment, but Berger said the company is helping FCAS track a list of antisemitic keywords and provide FCAS with analytics.

Berger — who previously ran Hillel International’s anti-bigotry and security efforts — said that a team of four people on FCAS’ staff comes up with queries and keywords to monitor. Berger declined to share the list of keywords itself but told eJP that it includes the word “antisemitism” in addition to slurs, common derogatory terms and terms related to the Holocaust, conspiracy theories, campus or Israel. It also includes what he called “positive cultural mentions of Judaism.”

They also take cues from both antisemitic and anti-Israel online personalities, as well as Jewish and pro-Israel users with large followings who call out antisemitism and anti-Zionism publicly. Berger declined to name them, but said they include Jewish organizational officials as well as politicians and journalists.

He added that FCAS is partnering with the ADL, local Jewish federations, Hillel chapters and Jewish on Campus, a group that aims to monitor and oppose campus antisemitism and anti-Zionism.

The keywords FCAS tracks “are based on experience, they’re based on the language and the terms that we’ve seen, over time, be fodder for antisemitic conversation,” Berger said. “As we monitor those posts and monitor those conversations, we continue to evolve the list of keywords.”

Segal said that the ADL has “consulted with them on what we’ve seen, as we’ve done this before.” Given the magnitude of antisemitism on social media, he doesn’t feel like the organizations’ work overlaps too much.

“There’s just so many online spaces and so many ways to try to understand this,” he said. “And when you have good partners who are trying to make sense out of it all, it’s worth seeing what they’re finding.”