Berger has worked at Hillel for seven years, mostly leading its communications team. 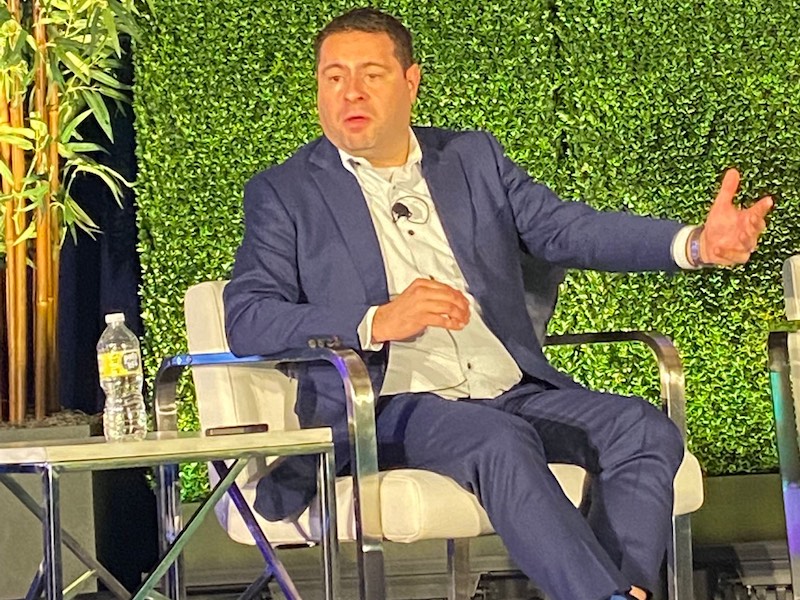 Matthew Berger speaks at a Jewish Federations of North America conference in Washington, D.C., on May 11, 2022.

Three years ago, after winning the Genesis Prize, billionaire businessman, philanthropist and New England Patriots owner Robert Kraft announced that he was donating the $1 million award to groups fighting antisemitism. He also founded his own — the Foundation to Combat Antisemitism (FCAS).

In the intervening three years, the group has kept a relatively low profile. But now, it’s hiring a new executive director from inside the Jewish world, eJewishPhilanthropy has learned. Matthew Berger, currently the vice president for external affairs and campus preparedness at Hillel International, will helm the group beginning next month, and aims to make it a center for up-to-the-minute information and assistance in fighting hatred of Jews — especially as data from the Anti-Defamation League show American antisemitism hitting record levels.

“It’s about tracking and response, and it’s about bringing groups together… to find best practices, to support innovation, to find inefficiencies where there’s overlap and to put our weight and our support behind those who are really being influential in this fight,” Berger, 43, told eJewishPhilanthropy. “There’s more that can be done on a regular basis to coordinate efforts.”

Berger has worked at Hillel for seven years, leading its communications team and, for the past two years, running its anti-bigotry and security efforts. He was one of the creators of #OwnYourStar, a Hillel social media campaign to counter antisemitism by promoting Jewish pride on campus and elsewhere. The campaign garnered 2,500 posts from young Jews and reached 5 million people.  Berger will continue focusing on social media through FCAS’ Command Center, which tracks the way antisemitism manifests online and develops tools to fight it. The center hasn’t made much of that information public, something Berger calls one of his “top priorities.”

“There’s a lot of information that we can be gleaning and sharing about the trends in antisemitism so that we’re fighting the problem in the moment,” he said, adding that the group will monitor antisemitism outside social media as well. “The threats change every day based on the conversation on social media. We all need real-time information about what is happening.”

FCAS is one of a range of groups that fight antisemitism, and one of a few that was founded in recent years. Berger hopes to make FCAS’ work distinct by positioning it as a convener of the other groups, as well as a funder of their efforts. While the group did not share its annual budget, it has $50 million in funding — including $20 million from Kraft. Kraft donated his Genesis Prize money to a handful of anti-bigotry and pro-Israel groups, from the Anti-Defamation League to the media watchdog Honest Reporting.

Berger also plans to continue the group’s work educating non-Jews about antisemitism. “A lot of the antisemitism that we see today is based on a misunderstanding of who the Jewish community is,” he said.

One facet of Berger’s identity, however, may not be welcome at the Patriots’ Gillette Stadium in Foxboro, Mass., where his office will be located. “I have made clear that I am a [New York] Giants fan,” he said. “And Robert has asked me to consider the Patriots as my AFC team.”