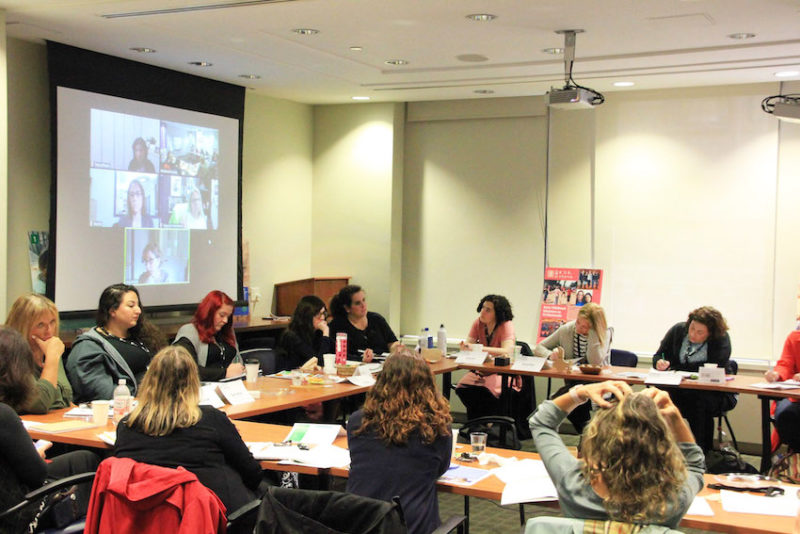 Jewish Women International (JWI) has secured a grant to begin the work outlined in its recent report on domestic violence in the Jewish community, JWI CEO Meredith Jacobs told eJewishPhilanthropy’s Helen Chernikoff. The grant from the Senser Foundation will fund a partnership with the JCC Association of North America, through which JWI will train preschool, after-school and camp staff to support children affected by domestic violence.

“This is really about dor ‘v dor,” said Naomi Senser, using the Hebrew phrase that means “from generation to generation.” “To stop abuse from recurring, we have to work with the children.” A former pediatrician, Senser has served as a volunteer and on the board of SHALVA, which offers domestic abuse counseling to the Chicago Jewish community.

She was familiar with JWI, having cited its research in her own efforts to raise awareness about domestic violence, and approached the group after watching a presentation about the report in April. “They said, ‘Is anybody interested in helping with our issues?’ And I went to my husband and said, ‘This is perfect for our family foundation,’” Senser, who sees children as the hidden victims of domestic violence, said.

JWI is also proposing programs that will help survivors build economic security and that will provide training and other services to the field of Jewish domestic violence programs. JWI’s report does not attempt to ascertain the rate of domestic violence in the Jewish community, which is difficult to quantify due to the taboo against discussing the issue. A paper updated in July on a National Institutes of Health website estimates that one in four women and one in nine men are victims of domestic violence, and that it affects 10 million people a year.

Concerns about how pandemic-related lockdowns were exacerbating abusive domestic situations inspired Schusterman Family Philanthropies to approach JWI. When JWI started working on domestic violence, most Jewish clergy either didn’t understand or refused to recognize domestic violence in their own community, Jacobs said. Clergy and other community leaders now recognize that the problem exists, said Deborah Rosenbloom, JWI’s chief program officer. However, another shift is necessary, she said, because Jewish communal culture still tends to prioritize the needs and comfort of the abuser (usually a man), rather than the survivor (usually a woman).

To attend High Holiday services, she noted, a domestic violence survivor may need to scramble to find a synagogue other than the one she attended with his or her abuser. JWI aims to educate communal organizations about the needs of survivors to the point that an individual will be able to attend services at the synagogue.

“It’s important for survivors to still be able to access those Jewish spaces,” Jacobs said.

The JCC Association was the most efficient way to start creating this shift, added Jacobs, who serves on the board of the Bender JCC of Greater Washington, in Rockville, Md.

“I knew what the movement was about,” she said, citing JCC Association CEO Doron Krakow’s aphorism that JCCs are the “town square” of the Jewish community.

The JCC Association is the service organization for 172 North American JCCs whose summer camps, after-school and early childhood programs serve about 200,000 children, and more than 1.5 million people a week.

Sue Gelsey, the JCC Association’s chief program officer, said that for the most part, JCCs have used local resources and education to grapple with the issue of domestic violence, which she said is “prevalent.”

The association has recently worked with Keshet, the LGBTQ advocacy organization, and the Institute for Jewish Spirituality to offer job-related training, she said.

In some ways, JWI’s research and the training it’s offering is a “game-changer,” Gelsey said.

In creating its report on the needs of survivors, JWI discovered that most Jewish institutions and staff don’t know how to enforce protective court orders that restrict contact between an abuser and a child, which indicated to the organization a more general lack of knowledge about best practices in security policies and the institutions’ legal obligations.

The JWI-JCC Association partnership supported by the Senser Foundation grant is built around a series of four workshops on such topics as the signs of trauma in children and the legal requirement to report abuse.

The workshops will start in November with a pilot group of four or five JCCs, and will be offered nationally in 2022 and 2023. By the end of the grant period, about 100 of the 173 JCCs will have participated in the training, according to the grant proposal. The program will evaluate its efficacy by testing the workshop participants on their knowledge of the subject matter both before and after the session.

The program will also aim to strengthen the relationships between the JCC and their local Jewish domestic violence survivor service providers, and create a team of clergy, lay leaders and professionals who can work across the community to support survivors with advocacy, prevention programs.

That group of people, for example, would step in to make sure a survivor would not have to confront her abuser at High Holiday services — if necessary, making sure the abuser has another place to go.

“We will bring together the leaders of the community, and ask them what we are doing to center our culture more around survivors,” Jacobs said.