Jlive is used by 90 organizations across Montreal and Detroit, where it has advertised more than 1,200 events. 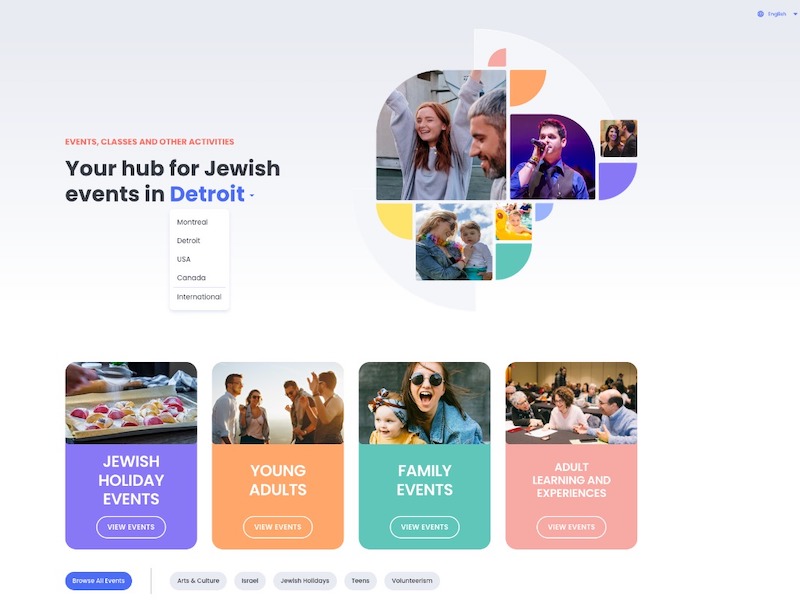 In 2019, on one of Scott Kaufman’s trips around North America to speak about increasing local Jewish engagement, he got an unexpected request: Could he extend his stay?

Kaufman, then the CEO of the Jewish Federation of Metropolitan Detroit, was in Montreal, and his talk had included a proposal for a Jewish event-management platform, in the vein of Eventbrite, called Jlive.

“We had this three-minute concept video [but] we actually hadn’t built much of anything,” Kaufman told eJewishPhilanthropy. But after presenting at CJA, Montreal’s Jewish federation, he recalls a staffer pulling him aside and saying, “I’ve got a donor I want you to meet, you have to come over.”

Kaufman learned that, much like in Detroit, leadership at CJA had been trying to find a new way to engage their community. “We’re seeing younger people becoming increasingly disengaged. We saw Jewish organizations that were struggling to connect,” Natana Shek, CJA’s chief Jewish identity and engagement officer, told eJP. “We needed to create an easy button to Jewish life.”

That easy button, the Detroit and Montreal federations agreed, could be Jlive. So they teamed up to turn three minutes of concept into a real product, launched in August 2020.

Nearly two years later, and still in beta, Jlive is used by 90 organizations across Montreal and Detroit, where it has advertised more than 1,200 events. The platform is an unusual partnership of Canadian and American Jewish organizations, representing a major investment — more than $3 million so far — into rethinking how to draw Jews into community in the digital age. Most of that money has been spent directly on the site’s development, rather than staff overhead, said Kaufman, who is now Jlive’s co-managing director, and works without a salary.

The idea for Jlive grew out of frustration with each Jewish organization’s silo of newsletters and events, which were overwhelming community members. To register for programs, “We [made] people fill out the same form. And if they go to a different organization, they fill out another form,” Kaufman said. “It feels like medical records, you’re always filling out the same thing over and over again.”

Alongside standard event management and registration features, Jlive is also a reflection of the Jewish community’s focus on data-driven decision making. By hosting organizations on a platform that is specifically for Jewish events, Jlive can aggregate and analyze granular demographic trends for individual agencies, like the age and location of attendees, as well as for entire communities.

“There have been many efforts to try to create some form of web technology to bring…different [Jewish] organizations together, whether it’s for calendaring, or to help raise money,” said Rabbi Jason Miller, a technologist and president of Access Technology, a tech support and marketing company in Michigan. He added that Jlive’s data tools may be able to help Jewish agencies better understand and build relationships with constituents, who will “actually feel like they’re doing something, and not just giving a credit card and making donations.”

Miller said that the initiative’s seven-figure price tag didn’t surprise him, given how much it costs to build an effective event platform.

“I don’t think $3 million is a lot for a startup like this,” he said. “There are a lot of places that we can say, ‘Why would they spend that much money there, when it could have been allocated here’…[but] you’re always going to have multiple opinions as to how communities should be allocating their funds.”

Most of Jlive’s budget has come from private donors from around the world, and Kaufman said the spending hasn’t eaten into the Detroit federation’s social services budget. He added that compared to the tens of millions of dollars the federation spends on helping community members in need, Jlive’s funding is fairly small. In 2021, according to its annual report, the federation had $38 million in total allocations, including more than $20 million that went to community service and a category called “additional local support.”

“No one put in a huge amount of money relative to their overall portfolio of philanthropy,” Kaufman said. “If we weren’t actively innovating, we would just stagnate and become irrelevant…The world is moving fast. So you have to do both.”

At first, Detroit leaders considered using existing platforms, like Eventbrite, to put all Jewish community programs in one place and to streamline the registration experience. But then Kaufman consulted with Robert Wolfe, a co-founder of Crowdrise, a crowdfunding site acquired by GoFundMe in 2017, who recommended building a product from the ground up, rather than using existing platforms.

Sites like Eventbrite aren’t designed for specific groups like the Jewish community, and don’t offer the flexibility or control of data that a custom platform would. “So [Wolfe] said, ‘Well, you could build it. It’ll cost a lot more, but it may actually work,’” Kaufman said.

That’s where the Montreal federation stepped in. Staff introduced Kaufman to a Jewish funders collaborative, made up of five local family foundations, that had been working with the federation to fund ideas that are “a higher risk than, traditionally, federations can invest in,” Shek said.

The cross-border partnership felt natural to the federations in both Detroit and Montreal, which have similarly sized Jewish communities, each between approximately 70,000 and 90,000 people. Despite being nearly 560 miles apart, Jewish leaders in both cities faced a common challenge: an out-migration of Jews.

In Detroit, the collapse of the automotive industry in the late 2000s meant fewer jobs, so Jews left for economic opportunities elsewhere. In Montreal, the community had been shrinking for several decades amid the Quebec separatist movement, with many Jews moving to Toronto. For both communities, Jlive felt like it could streamline Jewish engagement efforts.

The site is built by a team of developers and designers from Israel, Ukraine and California, along with some work from the Detroit and Montreal federations. One of its main benefits, as Kaufman and Shek see it, is the data processing and analysis now available to Jewish organizations.

At its simplest, Jlive’s algorithm recommends events to users based on what they register for, similar to how Netflix suggests content to viewers by analyzing what they’re watching. The platform also processes user data, all of which is kept anonymous, to help organizations improve their programming.

Organizations can better understand “which events are resonating,” Shek said. An organization might say, for example, “‘We planned this event for young adults, and we had 60-year-olds show up. What should we be changing?’…So they get a real, real-time picture and dashboards, both on an event-by-event basis and over a period of time.”

But collecting user data also poses ethical risks for the Jewish community. Personal information on Jlive could either be hacked and stolen by malicious actors, or Jlive could sell its data to brokers and advertisers in a growing market that is worth over $232 billion globally. And while user data is anonymized so as not to lead back to specific individuals, experts say it is relatively easy to de-anonymize data and trace people.

“Obviously, that’s a potential profit center,” he said, but added that he’s confident the venture can find funding elsewhere. “We think if we get traction, the philanthropic community will support [Jlive], along with some nominal fees.”

Shek added that Jlive is “being held accountable by data privacy laws…there’s very few people in Jlive who actually have access” to user data.

While data processing is important, Kaufman said, Jlive is focused first and foremost on user experience to streamline community members’ access to Jewish programming. The platform has been in beta since it launched so that organizations using it can give real-time feedback, allowing developers to address problems as they build it.

Jlive is in talks to expand into the Milwaukee and Palm Beach, Fla., Jewish communities this year, with plans to also start serving Ann Arbor, Mich. Areas with similar Jewish populations to Detroit and Montreal will pay about $50,000 to use the platform, with the price changing based on the size of the community. But growth will mean further adjustments for both Jlive and the agencies learning to use it.

For example, Jlive is working to integrate shulcloud, a website and database software used by many synagogues. For now, synagogues with events on the platform register people through a link on Jlive events that redirects back to the synagogue’s website, rather than with Jlive’s built-in registration feature. And organizations are still figuring out what Jlive means for their marketing strategies; simply posting events is not the same as actively using the data that Jlive provides to improve audience reach.

“Something we want to do over the next six months is some seminars on marketing,” Kaufman said. “Because this doesn’t replace all your marketing, you still have to be strategic.”

But just because an idea works for Montreal and Detroit doesn’t mean it will work everywhere. Kaufman and Shek acknowledge that Jlive, even with an unprecedented level of investment and development, could sputter out like any number of other attempted Jewish engagement apps or sites.

Miller predicted that Jlive’s long-term success will hinge on the site being quickly adopted as North America’s main Jewish event platform. Otherwise, he worries that Jlive will simply be seen as a local pet project.

“You’ve got to start getting these other communities lined up, I would say within six months,” Miller said. “If it’s just the Detroit-Montreal project, it’s not going to be successful.”

Kaufman agrees. “You need the critical mass,” he said. “It needs to feel like the town square.”

But even if other cities don’t sign on and the platform fails to grow, Jewish leaders in Detroit and Montreal feel Jlive will still be a beneficial tool. “We [still] have a super platform that is going to strengthen Montreal and the Detroit Jewish community long into the future,” Shek said. “That ship has sailed already.”