When we laud one rabbi’s fortitude to act calmly and comfort others in a moment of crisis, we should also reflect on the institutions and experiences that gave him and others like him the foundation and inspiration to engage in Jewish leadership in the first place.

Nearly 30 years before Rabbi Charlie Cytron-Walker found himself at the center of the latest antisemitic terror attack on a synagogue, he stood in front of a room full of his fellow teenagers wearing a silly T-shirt. Charlie’s choice of clothing was not an accident or moment of adolescent snark. Based on prior experiences in this group of teens, where he’d been mentored and guided in building foundations of successful leadership, Charlie knew that active leadership comes in many forms. A t-shirt full of holes and the text “Oh no, Acid Rain!” could spark conversation among his peers because, as a leader, his opinions and actions held weight.

About three years after Charlie wore his acid rain shirt, I sat among a similar gathering of teens as another young leader stood in front of her peers at the close of a weekend retreat. She dutifully recited the lineage of ‘The Shirt,’ as it had come to be known, invoking the names of her predecessors and honoring the legacy of their leadership before passing it on to the next, newly elected president. As I watched the older kids perform this ritual of passing leadership from one generation to the next, I thought, “I want to do that.” 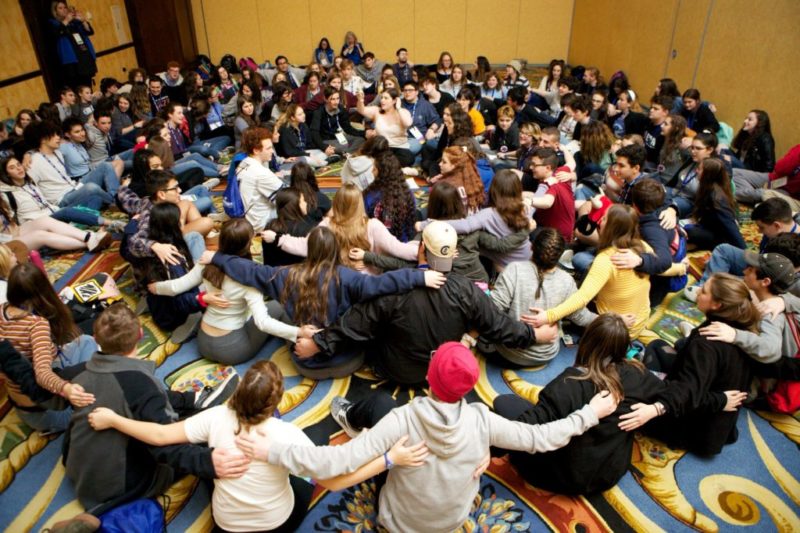 In the aftermath of the horrendous attack on Congregation Beth Israel, we are quick to praise one wonderful, brave, level-headed rabbi, and rightfully so. Additionally, this episode puts an important spotlight on all of the leaders who take on the work of sustaining our Jewish community, day in and day out. When we laud one rabbi’s fortitude to act calmly and comfort others in a moment of crisis, we should also reflect on the institutions and experiences that gave him and others like him the foundation and inspiration to engage in Jewish leadership in the first place.

The whole Jewish community surely wants to raise up continual generations of experienced, enthusiastic leaders like Charlie. The demand will only grow in the years to come. Unfortunately, as in the rest of the world, we have a supply chain problem. The realities of social, economic and institutional changes over the past several years, even before the pandemic, shut down many of the programs once available to Reform Jewish teens like Charlie and me. Programs such as NFTY, Kutz Camp and local and synagogue-based youth groups gave teens opportunities to lead, provided mentoring from clergy and other trusted adults, connected teens from Reform communities with similar interests across geographic and social boundaries and identified a pool of young people in whom the spark of communal service and leadership had already been kindled and could be further nurtured as they became adults.

I am in no way suggesting that these programs were or are the sole path to leadership, or that teens who weren’t attracted to these programs for one reason or another did not have equal potential to become leaders later, or in other settings. I am asserting that, absent the natural pipeline of engaged and enthusiastic young people who populated these settings, the task of raising the next generations of Reform Jewish lay and professional leadership has become much more difficult.

The NFTY structure allowed me to immediately channel my spark of interest into action. As I helped to create and facilitate gatherings for my peers, I spent countless hours learning important hard and soft skills, such as simple budgeting and group facilitation, that remain crucial in my working life. Peer mentorship and guidance from trusted clergy and educators offered opportunities to explore various interests, freedom to fail and learn from my mistakes, and encouragement to form my own vision for a Progressive Jewish future. In addition to events in my region of the country, I encountered a North American community of Jewish teens like me, with whom I formed bonds that comprise much of my personal and professional networks today. I experienced a community governed by and maintained by my peers, a living model of what it meant to take an active role in building and sustaining Jewish community.

Looking around at the current leadership of the Reform Movement (and beyond) – including so many to whom we turned for comfort and community as events in Colleyville unfolded – you’ll find thousands of people in lay and professional leadership roles who can describe similar youth experiences. They’ll recall a tap on the hand by an older peer or trusted adult who said “you have a place here” and gave them concrete ways to develop. Those teen experiences led us to make choices about where to spend our time, where to focus our educational and professional goals, which political causes to support, and how to be involved with the Jewish community as adults. Some of us looked to the bima, aspiring to clergy careers. Others, like me, leaned toward education, hoping to provide new generations with access to Judaism and Jewish tradition in the ways that inspired us. Still others became lawyers, doctors, coders, accountants, librarians, musicians, artists and writers, returning to Reform Jewish spaces as lay leaders. Regardless of the particular way we each translated our experiences, taking on leadership in a teen environment started us on the path to inherit the mantle of leadership in the Reform Movement as adults.

In this moment of strife and change, our community needs leaders. We need people who want to imagine a better future and plan how to get there. We need people who will make smart decisions about how our institutions should be run, and about how we should build and adapt and innovate. And I’m not sure where we will find them.
I believe it falls to us, the Gen-Xers and millennials who recognize how these formative youth experiences brought us to this moment, to take up the mantle. Those of us who lead and work in congregations must prioritize identifying, nurturing and mentoring young leaders. We need to look beyond the walls of our institutions and build partnerships with other Jewish and secular organizations who offer specific and skills-based leadership training that helps teens build a foundation for active leadership as adults. Most crucially, we need to foster relationships between teens and trusted adults who are models of active lay and professional leadership in all areas of Jewish life. We need to share the stories and invoke the names of those who came before us, who inspired us, and encourage our youth to envision a future where their name sits in the same echelon. If we truly care about having leaders like Charlie in our institutions in 2042, 2052, and beyond, we have to start now.

Caryn Roman is a Brooklyn-based Jewish educator, currently serving as assistant director of Lifelong Learning at Congregation Emanu-El of the City of New York. She is a product of the Union for Reform Judaism’s (URJ) local, regional and North American youth programs, through which she had numerous opportunities for leadership beginning at a young age. Caryn spent the first decade of her career working in URJ youth and camping programs and is an alumna of the School of Education at HUC-JIR.