I can say unequivocally, today as I pen this, that what keeps me up are the repetitive questions that continue to swirl around in my head: Are we safe enough? Are we doing everything we can to protect our precious community? Are we taking the reality that antisemitism continues to pose a myriad of threats to us seriously enough? Are we devoting enough resources? Are all of us playing a part in helping to improve our security?

I have often been asked during my life of fighting antisemitism: “What keeps you up at night?” I would get this question from members of the media, donors, lay and communal leaders within and outside of the Jewish community, everyday synagogue-goers and even those not affiliated with any Jewish institution or movement.

I can say unequivocally, today as I pen this, that what keeps me up are the repetitive questions that continue to swirl around in my head: Are we safe enough? Are we doing everything we can to protect our precious community? Are we taking the reality that antisemitism continues to pose a myriad of threats to us seriously enough? Are we devoting enough resources? Are all of us playing a part in helping to improve our security? 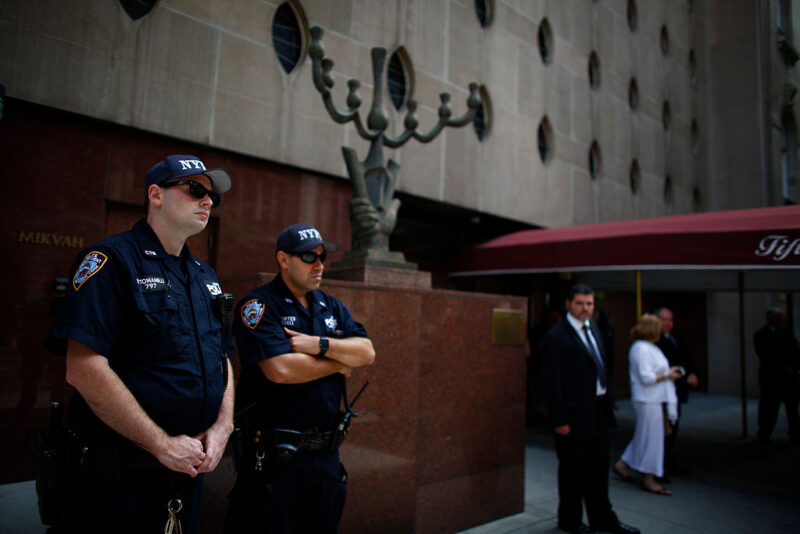 Thinking about the answers to these questions – particularly as another High Holiday season approaches – prompts me to always revert back to how Jewish communities outside of the United States have approached their security dating back several decades. European, South African, Latin American and Australian Jews possess this seemingly innate understanding about their personal responsibility to security that has not yet permeated the consciousness of grassroots American Jewry.

In an April, 2022 interview with The Jerusalem Post, Eric Fingerhut, president and CEO of the Jewish Federations of North America (JFNA), stated that the rise in antisemitism “reinforces the threat to us” and emphatically stated that “all Jewish federations must work collaboratively because we will not be able to meet this challenge alone.”

Michael Masters, who leads the Secure Community Network (SCN) wrote recently in joint opinion piece in The Hill with Wayne Frederick, president of Howard University, that “we face one of the most complex and dynamic threat environments in our nation’s history” and that it is essential that our security efforts outpace criminals in terms of preparation, resources and sophistication.”

Evan Bernstein, the CEO of the volunteer-led Community Security Service (CSS), in a December, 2021 open letter to our community emphasized that we need to “adopt a higher level of seriousness on the ground — with more proactive gusto — when it comes to addressing our vulnerability” and that a “worldview shift on Jewish security” is long overdue. In a recent conversation with Evan, he presented a stark question to me about the American-Jewish perspective on volunteer security: “How is it that we’re still 50 years behind Europe?” he asked.

As a Holocaust survivor who has devoted his life to ensuring anti-Jewish animus has no roof over its head, I know that it is imperative that we answer this question as we intensify our efforts to keep us safe.

The Jewish community must heed Eric, Michael and Evan’s calls – and heed them now.

The wake of the massacres in Pittsburgh and Poway has given birth to incredible whole of community initiatives on security, most notably with the efforts of SCN to carry out extensive intelligence gathering and facility assessments. SCN and ADL were credited for their life-saving incident response training after synagogue congregants in Colleyville were taken hostage. The various security partnerships and Memorandums of Understanding between groups like CSS, SCN, ADL and the UJA-Federation of New York’s Community Security Initiative (CSI) with the Jewish Community Relations Council of New York, and significant grant funding around The JFNA’s LiveSecure initiative, are not merely symbolic. They are noteworthy efforts to pool resources and varied expertise, and we need to continue breaking down any communal silos when it comes to security. There is too much at stake. Our ability to provide optimal protection is weakened when we do not act in concert.

Additionally, many individual leaders and clergy have responded to the moment by prioritizing relationships with law enforcement and hiring private security to improve physical security at synagogues, schools and other Jewish facilities. These measures are essential, but our safety demands a broader effort.

As the community prepares for the High Holidays in which in-person gatherings will be held with higher frequency, the message to philanthropists and private donors who so graciously give – but not specifically towards communal security – is to deeply consider how this “impact investing” significantly contributes to Jewish safety outcomes; To the foundations that prioritize helping the Jewish people flourish — but do not tailor any grants for security — consider how diversifying to include a security portfolio would aid in our ability diminish hate crimes against us and our beloved institutions; And for those who attend synagogue services or community events on a regular basis – and never thought that they needed to think about security – know that your active participation in it can save lives, as it has in many Jewish communities across the world.

Without the involvement of members of the community, we will not be able to put our synagogues, our cultural institutions and our precious gatherings in the safest possible position. Who knows more about what is normal and what is out of place at our facilities than we do? If everyone devoted a modicum of time to becoming trained, our community would be exponentially safer – and that is an understatement.

Today, we are living in an era where the Jewish community is more than thriving. We are innovating, we are fighting the good fight, we are working to cure societal ills by tireless efforts on the civil rights front to push extremism to the far dark corners where it belongs. At the same time, the extensive data on antisemitism must prompt us to prioritize our own personal responsibility on security in ways that have not been valued in the past.

Abraham Foxman, a Holocaust survivor, is director emeritus of ADL (Anti-Defamation League) and served as national director for 28 years.