This Berlin-based group is reexamining Jewish texts through art

“The main goal is to engage in contemporary Jewish discourse, lishma, or for its own sake,” Shiur's founder said. 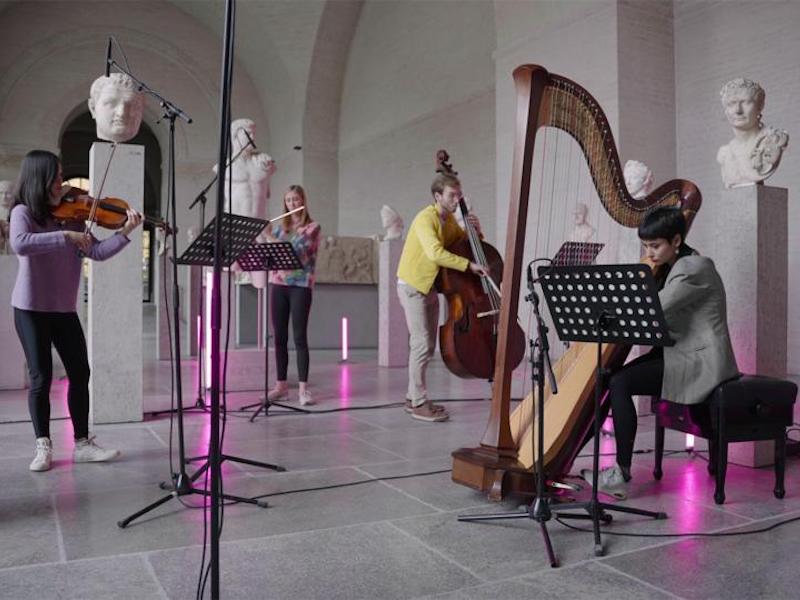 A musical performance organized by Shiur in Munich last year.

In one of Elliot Safra’s most distinctive Hanukkah memories, he remembers standing with others in “this enormous space” in a contemporary art museum in London, when the lights shut off and everyone began a breathing exercise while walking.

“All of a sudden, it made Judaism a tactile and physical experience for me rather than just an intellectual one,” Safra told eJewishPhilanthropy. “And I thought that was very powerful … assigning kind of physicality and experiences to things that are sometimes just rote or intellectual exercises.” The event, put on four years ago and called “Light in Darkness,” was one of the earliest offerings from Shiur, a nonprofit that gives people opportunities to engage with Jewish text and practice in multidisciplinary and often unexpected ways.

Safra has been involved since Shiur’s inception, hosting the first informal event of around 10 people in his living room, and is a volunteer member of Shiur’s executive leadership team.

Founded by filmmaker and artist Micki Weinberg in Berlin in 2018, Shiur means “lesson” or occasionally “measurement” in Hebrew and is related to the Hebrew word sha’ar, or “gate,” Shiur’s multiple meanings convey the initiative’s purpose of re-examining the world through different mediums.

The organization breaks paradigms in another respect as well. It doesn’t have an operating budget — instead planning events and funding them on an ad-hoc basis. Nor does it have a paid staff, though it is hoping to hire one soon and to have an annual budget. The organization has received funding from the German Ministry of Interior, the American Jewish Joint Distribution Committee, the Jewish Agency for Israel and other donors.

“The main goal is to engage in contemporary Jewish discourse, lishma, or for its own sake,” Weinberg told eJP. Shiur “is not about bringing Judaism to others,” Weinberg added. “It’s about making Judaism.”

Weinberg has studied Jewish texts in both traditional and non-traditional settings. He spent time learning at the Mir, a prominent Haredi yeshiva in Jerusalem, and also studied in a graduate program  at the Hebrew University of Jerusalem with a focus on intertextuality in ancient Jewish literature.  Following his studies, Weinberg found the Jewish programming he attended in both Europe and the U.S. limited.

“Jewish programming was often almost exclusively oriented towards dating, community, identity, or some other agenda – which oftentimes results in watered down Jewish content and an infantilization of the audience,” he said. “At Shiur, we trust our audience’s ability to engage in high level discourse and complexity, just like they do in their professional life.”

Weinberg wanted to give people the chance to engage with primary rather than secondary sources. At the same time, he was interested in film and art, and was particularly drawn to transgressive thinkers who questioned widely held assumptions. These two areas started to intersect, he said, when he invited people at the synagogues he was involved in to art events, and artists to the synagogues, until Shiur began to “carve out” its own space, he said. For Weinberg, Berlin – a city where Jews by necessity are rebuilding their community without the preexisting structures present in other places – provided an ideal setting for this type of experimentation.

Key to Shiur, says Weinberg, is the concept of “entanglement” put forward by feminist theorist Karen Barad, a professor at the University of California, Santa Cruz. “Space, architecture is just as important as what you’re reading there. The space shapes our interpretation. Who you’re with shapes how you see things,” he said. “And it’s entangled, it’s the other way around, too – the discourse that we have is going to shape the way we experience space, sound, music, art.”

Weinberg now publishes a weekly newsletter, the basis for Shiur’s weekly virtual gatherings, which grew to 150 people during the pandemic. Participants engage in text-based discourse around a “multiplicity of content in art, literature, philosophy, cinema and more,” Weinberg told eJP, with various guest speakers including academics and contemporary artists. The focus is on amplifying marginalized voices, he said, “to uplift the sparks that we have not benefited from.”

For example, a November 2021 program called “The Ballad of High Noon” featured Yazidi artist and activist Sedat Oezgen. Together, participants discussed the texts sent out in the newsletter, which included the work of scholar Gershom Scholem, an essay by Marxist activist Rosa Luxemburg, and a graphic novel by Will  Eisner. Participants were invited to try drawing three very different sketches of a person in their lives and re-interpret them, an activity that reflected Bertolt Brecht’s idea of challenging the concept of a “legitimate sketch.”

“This virtual Shiur was particularly special, as we are prioritizing collaborations with the Yazidi community, who are today contending with what the Jewish people experienced after the Roman conquest of Judea – they have an oral tradition and many laws that simply do not work in diasporic and post-genocide conditions,” Weinberg told eJP. “Through the virtual Shiur, the Yazidi participants were able to experience how we interpret and reinterpret our traditions, whilst directly engaging their narrative with our tools. We gained a great deal of insight from the input of the Yazidi participants, and Sedat in particular.”

Since then, Weinberg said that Yazidi have been regular participants in Shiur events.

Shiur’s reach extends beyond Europe. Craving intellectual stimulation and social connection during the pandemic, Hannah Geis decided to join a virtual Shiur event from New York, and enjoyed the conversation and connection with people in different parts of the world so much that she started attending every week.

“I felt like the two hours that I spent with this community were a breath of fresh air,” Geis said. “I had food for reflection, and I just felt energized by having those conversations with such a diverse group of people.”

Geis also attended a live event in Mexico in early 2022, a Shabbat dinner held at a vegan restaurant. “There were some traditional components like kiddush and challah. But then we also had a text-based conversation around the theme,” she said. “And so, we looked at different sources of some of them Jewish, some of them not, and we discussed at the dinner table.” Live Shiur events have taken place in many other  locations, including Greece, Portugal, Spain, England, Germany, and the U.S..

“We questioned the notion of reification, where sometimes a protest song can actually be counterproductive because what it does is it commodifies protests and it turns it into another product,” said Weinberg. “And also, in Jewish discourse, this idea of not attempting to represent our world as if it is in a morally perfect way. Sometimes, by presenting a situation that seems correct, we actually are undermining. We oftentimes need to provoke a response rather than dogmatize an answer.”

In Safra’s view, Shiur has attracted people who would not normally be engaged in Jewish discourse. “I think it has brought non-Jewish participants into open Jewish discussion that is not politicized or Zionistically oriented and made them interested in Judaism as a religion and as a culture,” he said.

For Geis, who was raised in an ultra-Orthodox environment where Jewish texts were seen as “untouchable”, participating in Shiur has been empowering.

“It’s not an all-or-nothing approach to text,” she said. “The message is always that you can find beauty everywhere in life in all sorts of sources, whether it’s contemporary art or philosophy, literature, cinema, Jewish, non-Jewish texts, religious texts, secular. And I felt like it made me more open to them, because I wasn’t expected to just take them literally or accept them necessarily, as dogma.”