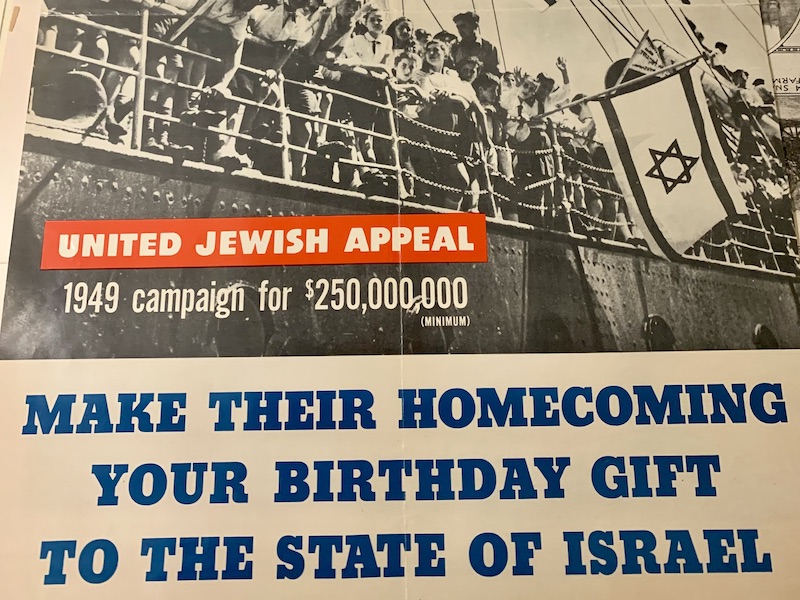 A poster for a 1949 United Jewish Appeal campaign.

Some of the most important work that Tamar Zeffren and Melanie Meyers do involves sifting through file cabinets in drab, labyrinthine rooms and discarding copies of documents.

Their mission: to preserve a record of how American Jewish philanthropy has evolved over the past century and beyond. As staff members at the American Jewish Historical Society, they are charged with safeguarding and expanding an archive of American Jewish foundations, nonprofits and charitable societies that collectively comprises thousands of boxes of documents, taking up stack after stack in a backroom of AJHS’ museum in lower Manhattan.

“Those records also say as much about the individuals who are doing the giving, who are identifying the needs, and I think that that’s a very valuable piece of the story that understandably isn’t always foregrounded,” Zeffren, the museum’s director of archival partnerships, told eJP during a tour of AJHS’ stacks, adding that many philanthropists may not have thought to preserve a record of their giving process. “It seems self-absorbed to think, ‘Wait a minute, this work should be documented, because it’s a vital piece of a bigger conversation.’”

The collection is trying to preserve that conversation, and its latest major addition is the archive of the Natan Fund, which was founded 20 years ago and has provided seed funding for several of the most well-known Jewish nonprofits of recent years, such as the environmental group Hazon and Sefaria, the digital Jewish text library.

The Natan collection comprises nearly three dozen linear feet — a unit roughly akin to a box of paper at Staples or, say, Dunder Mifflin in “The Office” — and is mostly taken up with meeting minutes and successful and unsuccessful grant applications. It took one archivist about five months to sift through the papers, discard those that were irrelevant to the collection and organize it. While the final cost for that project, which Natan is funding, has not yet been determined, AJHS estimates that a project that size would cost between $40,000 and $50,000.

“We felt we had this unique insight and treasure of how entrepreneurs were thinking about the challenges and opportunities of modern American Jewish life,” Adina Poupko, Natan’s executive director, told eJP. “If everyone keeps all their papers secret and hidden, then future generations will be missing out on a really critical piece of our story.”

All told, AJHS’ philanthropy collection comprises nearly 8,000 linear feet, anchored by several collections from large institutions, many of which are defunct or have changed their form and name over the decades: The National Jewish Welfare Board, the Council of Jewish Federations and Welfare Funds, the Avi Chai Foundation and the UJA-Federation of New York. The UJA collection, at 2,200 linear feet, took a team of six archivists four years to process, from 2011 to 2015.

The museum was founded in 1892, and one-third of its 15 earliest collections were charity archives whose names put the contemporary Jewish organizational alphabet soup to shame, including one called the Committee of Americans in Aid of Starving Jews in South Russia from 1900, or the National Committee for the Relief of Sufferers of Pogroms. The museum’s oldest philanthropy archive is called the Purim Association, which goes back to 1865, and documents a ball held annually on Purim for the benefit of causes such as the welfare of Jewish orphans. The motive behind those collections, said Meyers, was to portray the Jewish community in a positive light.

“These guys, who also were very interested in history and education, felt that the best way to combat this antisemitism was to show that Jews had been in America since before we even called it America, were as patriotic as anybody else, not new here at all,” said Meyers, AJHS’ deputy director and chair of collections. “A lot of the earliest collections, honestly — you’re showing the best parts, you’re showing people collecting money and doing good for others, you’re showing the Colonial families who fought for the American side, not so much for the English side, although we have a little bit of that, too.”

The impetus for collecting philanthropic archives has since evolved, for both the museum and the donors who are giving over their papers. Lila Corwin Berman, who chairs AJHS’ Academic Council, said that a philanthropist’s desire to be remembered, and to contribute to history, may clash with the risk inherent in allowing others to pore over private documents. But she said that adding to the historical record is good practice for foundations that strive to be transparent.

“The question of what would compel one to give it all away and allow their practices and procedures to be archived, and at least to an extent an open book, I think has sort of been up in the air,” said Corwin Berman, a professor at Temple University and the author of The American Jewish Philanthropic Complex. “It’s really, really important to continue to make the case to philanthropies that they should be working toward transparency today, and they should be working toward transparency in the future.”

No matter how much access organizations provide to their records, there are some files that the museum’s archivists do not preserve. Personal information about employees, generally, is outside of AJHS’ purview, and the museum has yet to archive any of the endless petabytes of emails sent between and within Jewish charities.

“We do not take HR or personnel records… people’s social security numbers, photocopies of their passports, sometimes, depending on your personnel record, you know, disciplinary action, any number of things — healthcare information,” Meyers said. “Those are the kinds of things, [if] we find them, we send them back or we destroy them.”

More broadly, AJHS and the foundations it works with recognize that the work of archiving, as with everything else, is moving to the digital realm. To prepare for that process, Natan is storing everything on an ever-expanding Google Drive. And future archivists should be prepared to do some more sifting. The fund rarely erases documents, Poupko said.

“Everything has been digital since 2015 and we do not delete things that could be important in the future,” she said. “We basically don’t delete. We just keep paying Google more to increase our drive.”