In the fall of 2021, the Kaiserman JCC began a partnership with The K’ilu Company, a new organization dedicated to activating early childhood Jewish discovery through immersive theater and imaginative play.

A group of preschoolers sits close together, eyes wide with wonder, faces illuminated by the glow of a battery-operated campfire fashioned to look like the Burning Bush. The trick is simple, but to them, the illusion is completely real. Suddenly, one child emphatically proclaims, “We need to go back to Egypt with Moses. He needs our help!” They stand up, springing into action. In a multi-purpose room at the Kaiserman JCC outside of Philadelphia, the story of Passover has come to life through the power of interactive theater.

In the fall of 2021, the Kaiserman JCC began a partnership with The K’ilu Company, a new organization dedicated to activating early childhood Jewish discovery through immersive theater and imaginative play. The school year had once again been dominated by the impact of COVID-19, and the community was just beginning to consider in-person programming again. The partnership began with a question: Can we bring people together again for the spring Jewish holidays, using theater as a vehicle for shared connection and joy? The question felt especially charged for very young children and their families, who had navigated the last few years in isolation and missing out on the moments of communal celebration that might have otherwise been a vibrant part of their lives. A year into our partnership the answer seems clear – Not only can we, but arguably this approach may be exactly what we need. 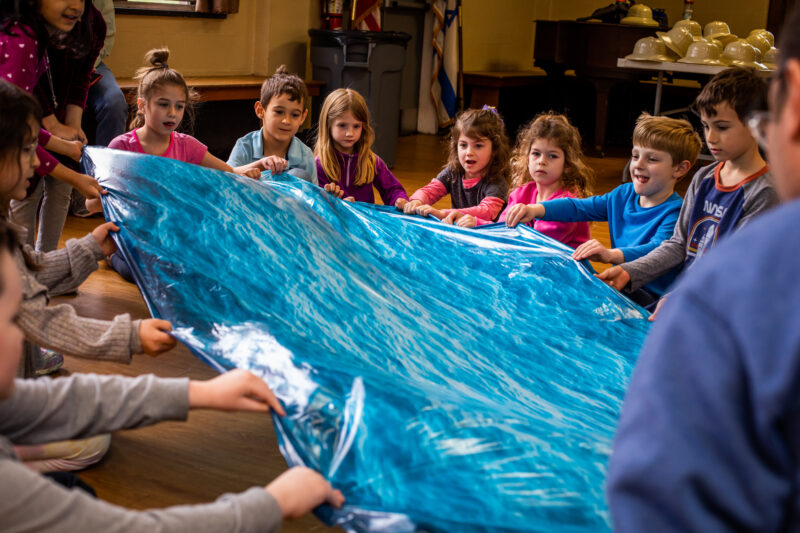 Through the pandemic, The K’ilu Company had tried to create meaningful theatrical Jewish experiences through the creation of K’ilu Kits, interactive adventures designed for families to bring to life at home as a way to experience the Jewish holidays. The centerpiece of each kit was an interactive audio track featuring professional voice actors, original music, and immersive instructions that put the child inside of the story as an active participant. Along with an adventure map, props from around the house and some imagination, families experience the origin stories of Jewish holidays k’ilu – “as if” – they are there themselves. During a time when families were stuck at home, and spending too much time in front of screens, K’ilu Kits gave them the tools to bring the holiday to life in their homes while generating wonder, play, and live connection. Through generous support from the Jim Joseph Foundation, The K’ilu Company adapted the interactive audio escapades as the “world began to open up.” A Purim adventure was launched for 3 to 7 year olds and their families at a return to a live carnival celebration, and a Passover adventure was piloted in JCC Pre-School classrooms. In an effort to build a bridge between the classroom and the home, K’ilu Kits were sent home with preschoolers following the experience, so that they could “lead” the adventure with their families for the holiday after having participated at school. In essence, we were leveraging the best of hybrid experiences, in order to meet each family where they were.

Ultimately, this approach proved to be a huge success, particularly in activating these stories for very young children, their families and their teachers in person. By putting the families at the center of the story together, immersive theater allows them to be introduced to tradition in an immediate, accessible, and exciting way. They become part of the story, seeing themselves inside of ancient narratives. While theater and the creative arts always have the unique power to generate deep engagement, they have proved to be the ideal tools to bring people back together after the impact of the pandemic. Kids and families arrived for Purim, tentative to be in physical space together again, but over the course of the program, lost themselves in the music, dancing, movement, and story. They were transported, and they became a community on a shared adventure. In the classrooms, the students became wildly invested in the Passover story, enthusiastically imagining that they were floating down the Nile, running through the desert, and saving the Israelites together. When they crossed the Red Sea at the climactic moment of the experience, running underneath a sheet that became the sea, they were exuberant. They had accomplished something, together. Their unbridled joy reminded us of what had been missing, and how much we all need to be in physical space together – sharing stories, making each other laugh, creating something bigger than ourselves.

Jonathan Shmidt Chapman is the founder of The K’ilu Company, creating projects that activate Jewish early childhood through theater and imaginative play.

Alan Scher is the CEO of the Kaiserman JCC in Philadelphia.