She leaves at a fraught time for the fight against antisemitism: Two months ago, the ADL’s annual audit tallied a record number of antisemitic incidents in the United States. 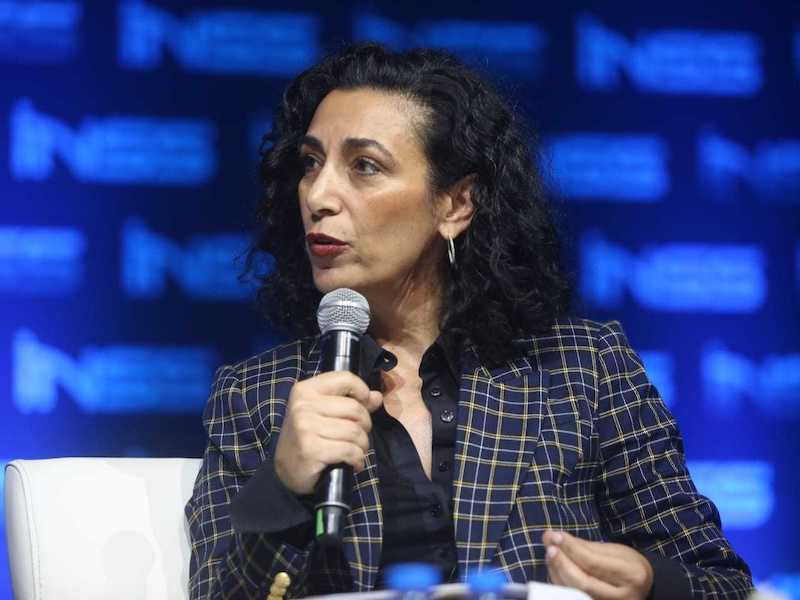 Less than a month after the far-right rally in Charlottesville, Va., in 2017, Sharon Nazarian decided to step away from running her family’s foundation for work that felt more urgent: heading the Anti-Defamation League’s international arm. In the nearly five years since then, Nazarian, the ADL’s senior vice president of international affairs, exported the anti-bigotry group’s educational materials globally, including placing anti-hate curriculums in British and Chilean schools, and training Mexican diplomatic staff in combating prejudice.

She’s also worked to raise awareness of international hatred of Jews. Another piece of her work also harkens back to the Charlottesville rally: demonstrating that white supremacists operate as a global network advancing shared ideas and tactics.

On July 1, Nazarian will leave the ADL to again serve full-time as president of the Younes & Soraya Nazarian Family Foundation, which funds Israel education in the United States, and focuses on education and public policy more broadly. She leaves at a fraught time for the fight against antisemitism: Two months ago, the ADL’s annual audit tallied a record number of antisemitic incidents in the United States. A few weeks after that, a white supremacist opened fire on shoppers in a Black neighborhood in Buffalo, animated by the same conspiracies that, Nazarian and other experts say, are spreading worldwide.

And, she told eJewishPhilanthropy, much to her chagrin, Iranian Supreme Leader Ali Khamenei is still on Twitter. Earlier this month, he tweeted that “The Zionists have always been a plague.”

Here’s what Nazarian, who also holds a doctorate in political science, had to say about her time at the ADL, what else she wished she’d done and how it felt to do that work as an immigrant from Iran.

The interview has been lightly edited for length and clarity.

eJewishPhilanthropy: What drew you to work at the ADL?

Sharon Nazarian: Charlottesville was a huge factor in my decision… Being recruited to come in and build an international platform for ADL’s work is what I committed to.

For the first time in ADL’s history we have the possibility of a global, fully digital antisemitism educational product for students. The model is in partnership with Jewish communities, firstly in Europe. We already announced our first agreement with the Jewish Board of Deputies in the UK [to institute the ADL’s educational curriculum in 25 British schools in the coming academic year] … The next two countries we’re already in advanced conversation with are France and Germany.

A lot of the challenge facing Jewish communities around the world is, first and foremost, ignorance about Jews, about Jewish identity, who we are, what are our practices, what is our immigration story.

How does it feel to be leaving this work at a time when there’s a growing understanding that far-right groups across borders are working from a shared playbook?

We’ve really put a lot of focus and light on the transatlantic threat arising from extremist groups in Europe that are then replicated by American extremist groups… [It’s] the internationalization of white supremacy. We have to look at these threats not purely within our own borders but really [as] a global threat.

Also we’re expanding the languages we’re monitoring. We’re doing a lot of research on online hate and how the platforms are performing in taking down and moderating hate content, not just in English but in all of the other languages they’re not paying attention to.

Farsi is very important because Iran is such an engine of antisemitic Holocaust denial rhetoric. They translate it into Spanish and French and other languages… The reach of Iran is vast and so our research also has to encompass not only what Iran does internally, domestically, what it does in the region, but what it does globally.

A lot of our content is now translated and pitched to Spanish-[language] media in Spain and Latin America… The largest media companies are interested in our work when it comes to [conspiracy theories such as] QAnon or the Great Replacement Theory, because we’re seeing some of those threads show up in their societies.

How does your family’s history impact the work you’ve done?

I know what it means to be part of a vulnerable Jewish community that lives in a non-democratic society. My personal family story of leaving Iran because of the Iranian Revolution, having to be forced out of our homeland after generations after generations of antisemitism… was very formative in not only my Jewish identity but my professional identity as well.

I was 10 [when the family left Iran]. I have very clear memories of going to Jewish day school across from Tehran University… having rocks thrown at our windows… When I speak to communities around the world in my ADL job it helps them to know that I am not just an executive from some American organization, but that I do bring that personal experience of the vulnerability of being between a rock and a hard place.

Do you think American Jews pay enough attention to Jewish perspectives on antisemitism from the Middle East and North Africa?

The narrative or discourse [on antisemitism] in America today, within the broader Jewish community, is very much one led and felt by the non-immigrant Jewish community. But I think Jewish immigrants who’ve chosen to come to America bring a perspective that’s highly valuable, and it’s a shame that we don’t have a stronger voice.

When we talk about Jewish security, for example, and Jewish institutions, buildings, keeping them safe — North African and Middle Eastern Jews have had to contend with that all of our lives. How do we prepare our children to go from Jewish day schools to universities and other communal spaces where they’re not surrounded by Jews? What does that mean? How do you deal with daily attacks on their Jewish identity, on their beliefs, on their support for the state of Israel? We know how to do those things.

Jewish students who come from immigrant families have a clarity, in some ways, about what are the threats, what are the challenges, that non-immigrant and non-Middle Eastern Jewish young adults, and even broader community members, lack.

Is there anything you wish you’d done at the ADL that you haven’t achieved?

What I would have liked to do more of, if I had the bandwidth, is to really get Khamenei kicked off of Twitter, which he should be. We just saw the tweet he had this week — really blatant, blatant antisemitism put in the package of anti-Zionism… You have leaders who use such horrific language, and yet they continue to have a platform… [former President Donald] Trump got kicked off, and we [ADL] welcomed that, and… we’ll continue working on that front, because [Khamenei] should not have the platform he does to spew that kind of hateful language.

What do you look forward to doing at your family foundation? Is it at all related to your work at the ADL?

We’re coming at the same goal from different angles. Our Israel office works on the ground with Israeli society, combating hate and combating extremism in Israel, and building a more social cohesion narrative in Israeli society. If you look at the institutions we support in Israel, many, many of them — like the Bezalel College of Art and Design, that’s an institution that really empowers and enables the diversity of Israeli society.

We support institutions that reflect the very diversity of Israeli society, and empower and enable Israeli democracy.