Secondhand belongings providing a fresh start to those in need

According to NARTS: The Association of Resale Professionals, there are currently more than 25,000 resale, consignment and not-for-profit resale shops in the United States. 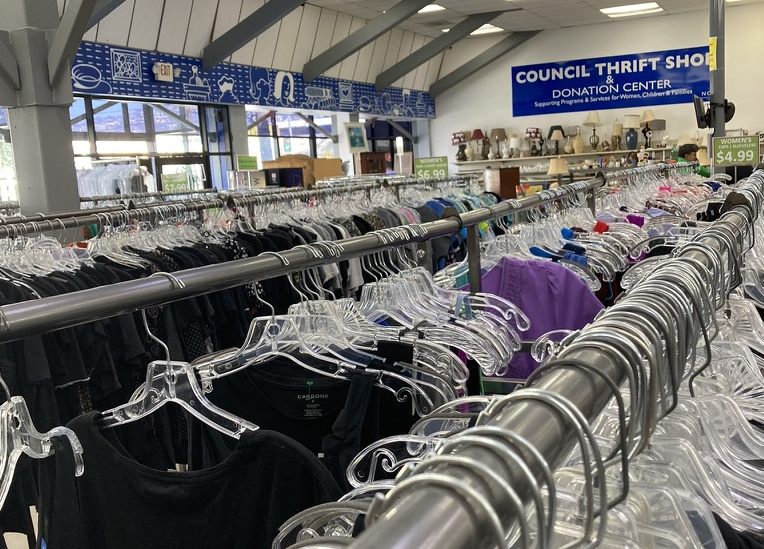 Searching for unique pieces of clothing; finding fashion that’s affordable; keeping old belongings out of landfills: whatever your motivation for shopping secondhand, thrifting is on the rise. In the realm of social media, thrift influencers built platforms on their dedication to “sustainable and ethical fashion,” protecting both the producers of fashion garments and the environment.

According to NARTS: The Association of Resale Professionals, there are currently more than 25,000 resale, consignment and not-for-profit resale shops in the United States. Online resale companies like ThredUp give clothing, shoes and more a second life; for fancy events you can order from Rent the Runway or check out TheRealReal for designer duds. There is even a National Thrift Store Day (Aug. 17). And while thrift stores online and off can offer deep discounts, some stores are using those fabulous finds as philanthropy: funding nonprofit programming to improve their local communities.

The National Council of Jewish Women is deeply involved in the charity thrift market — the 130-year-old organization’s local chapters, which are called sections, run thrift outlets to generate programming income that is used for educational service and advocacy efforts in the community. Section members are responsible for staffing as well as creating the strategic plan and vision for their local outposts.

Lindsay Morris, director of engagement and leadership at NCJW, told eJP that the shops serve as a tool of economic justice for local communities, an opportunity for low-wage earners and people struggling to make ends meet to shop for free or with vouchers.

“Decades ago, post-World War II, [the stores] also served as a way for women to gain employment skills and get into the workforce. Economic justice has always been an NCJW core value,” Morris said, adding that the thrift stores and resale shops are “just one important component of the social change and gender justice work that [NCJW sections] do in their communities.”

Morris added that innovations in the thrift store model come from the individual communities; for instance, the Los Angeles and St. Louis sections were the first to add online models in addition to the brick-and-mortar shops.

The ebb and flow at Pittsburgh’s Thriftique

A few years after the Thriftique opened in 1927, it began raising funds to aid German Jews and Jewish refugees from Eastern Europe; today, it is still helping immigrants and refugees, now mostly from Afghanistan or Ukraine, Patricia Tsagaris, its director of retail operations, told eJP. The neighborhood is not too gentrified and has a lot of renters, she added. Local students frequent the 8,000-square-foot store, which is “filled to the gills, racks above racks,” she said. “We never had a problem with donations being down.” Needs are seasonal, ebbing and flowing; people need desks and chairs at the beginning of the year and donate them at the end. Because it’s difficult to store and sell big pieces of furniture like china cabinets or fancy dining room tables, the shop sometimes has to decline those donations; people like the smaller items: bedside tables and coffee tables, for example.

Thriftique’s clothing voucher program distributed a total of $5,000 in vouchers to more than 200 women in financial transition, and helped more than 40 American immigrants and refugees via partnerships with eight local organizations, over the last two years. They also partnered with area schools and organizations, matching people for mentorship and job training skills.

Over the last few years, the store — which previously attracted mostly older locals — was discovered by thrifting influencers on TikTok, who had posted about the store on the popular app. This led to a bump in traffic to the store and an increase in younger shoppers; subsequently, the Pittsburgh City Paper named it the city’s best thrift shop of 2021.

Keeping the charity purpose of the shops at the heart of their operations, various stores use the structure to support and employ those who need it most. In Pittsburgh, at-risk women shop at Thriftique with a voucher, and the store provides job training for children with special needs. “We’re always doing some kind of direct service,” Tsagaris said.

“We’re vital and we’re really needed during this time,” Tsagaris said. “Especially when people are a little more environmentally conscious of reuse and [are] shopping secondhand.” She added, “They think they’re just doing a good deed by shopping secondhand, and then when they find out about our programs” — she mentioned donating books to children’s playrooms at the local courthouse and advocating for reproductive rights as examples — “that is a bonus for them.”

The Council Shops in the City of Angels

The six L.A.-based stores known as the Council Shops, first opened in 1924, contribute the majority of NCJW|L.A’.s unrestricted operating budget to this day. Of the funds raised through the Council Shops, 84 cents of every dollar goes directly to L.A.-based programs and services. (By comparison, at Goodwill, it’s 86% of income; at Salvation Army, it’s 82 cents of every dollar.)

Carrie Sue Jacoves, director of development and outreach for NCJW|LA, said that the organization’s resale shops operate to help “working women who are surviving but not thriving,” and provide a chance for items to be “renewed, rediscovered and reloved,” with proceeds revitalizing the community. They also provide a Clothing Assistance Program, which distributes pre-loaded gift cards, which enables recipients to obtain vital clothing and household goods while blending in with other shoppers, Jacoves added.

The Council Shops are not volunteer-run, Jacoves said; they employ nearly 90 people across Los Angeles, and starting pay is more than $16 per hour, well above the current minimum wage requirements, and all employees — at NCJW|LA and the Council Shops — receive fully covered medical benefits.

“We walk the walk. Whatever we fight for we’re also doing within our organization,” Jacoves said.

Jill Sager has been regional manager at NCJW LA’s Council Shops for four years; before that she worked with Goodwill and The Salvation Army. Although the Council Shops had closed for about five or six months at the start of the pandemic, Sager said the stores are now open, busy and running efficiently, moving a total of between $8 million-$10 million a year.

During the pandemic, as people spent more time in their homes — and cleaning them out — the Council Shops were inundated with donations; they packed the surplus into giant storage pods, so that when stores reopened, they’d have product available.

At the Council Shops, books and clothing are always in demand, while old media — CDs, DVDs, even vinyl — is not. Generally, Sager said, because donors provide high-quality items, the majority of donations can be sold or otherwise recycled.

“It’s very expensive to end up dumping your donation,” Sager said, explaining that other organizations like Goodwill and The Salvation Army may buy a bulk lot of unused donations, which are subsequently auctioned, sent to other countries or sold at swap meets. “We keep as much out of the trash as we possibly can,” she said.

Because the stores have been open and a community fixture in the Los Angeles retail landscape, the stores have a lot of regular shoppers, and many longtime staff members. “I think we’re really connected in our neighboring communities,” Sager said.

Secondhand and spiritual at BTS

At Beit T’Shuvah’s thrift store in Los Angeles, all proceeds go to support the organization, which runs a residential addiction treatment facility in Los Angeles that incorporates spirituality, the 12-step philosophy and psychotherapy in its treatment approach.

Because BTS doesn’t turn away people who cannot pay for services, the thrift store’s revenue is crucial toward supporting people’s recoavery from addiction, said store manager Mordekhai Moadeb, who started at the store in 2009 as a lifter.

“A lot of the residents come from prison or straight off the street to Beit T’Shuvah,” Moadeb said, noting that BTS residents are given a store voucher for 10 pieces of clothing, and sometimes also take a piece of furniture for their rooms at the facility, which can help get people back on the right foot with their recovery.

The store gets about 60 percent of its inventory from estate sales and the rest from private donors, Moadeb said, who trust that the shop knows the value of their donated items.

“My job is to get the most money for the items so we can raise more money for Beit T’Shuvah,” Moadeb said. “We’re not gonna get a Marc Chagall lithograph and put it out for $20. Why would we do that when it goes for $1,200?” And the process works; the store raises about $1 million a year, a tenth of the organization’s annual $10 million budget.

Moadeb said he loves the fact that the store provides a recycling opportunity, but beyond that, he feels a bit of a spiritual energy exchange happening between the inventory items, their former owners and the shoppers, he explained.

“I feel like every piece of furniture or thing has a soul in them. I hope that they find good homes with the people, and that their spirit lives on within their new energies.”

Moadeb also works with the roughly 10 work therapy participants from the rehabilitation center who, after three months of work in the core recovery program, fill various roles at the store as part of reacclimating to schedule and society outside of addiction. Moadeb said he matches workers’ emotional state to store jobs: For instance, if someone is experiencing a challenging moment, he helps them talk it out and places them in a role where they don’t have to interact with customers that day.

“I help guide them back into society, which is sometimes very difficult for them,” he said. “Some people need three months, some people need six months. The great part about Beit T’Shuvah is that they let people stay there for a year, year and a half, and they’re not being charged. That’s why we’re here.”