The decision was driven by the disruptions of the COVID-19 era and wasn’t financial, according to ROI leadership. 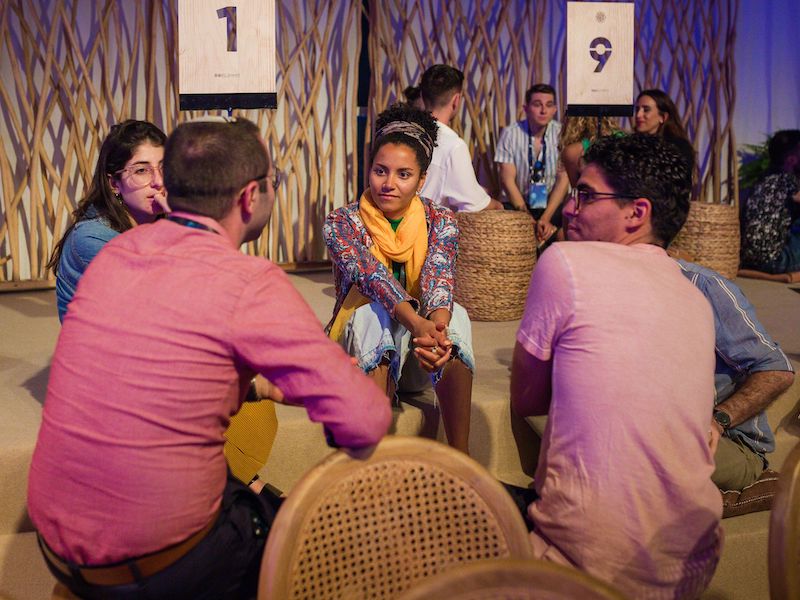 The annual ROI Summit, which brings together young Jewish activists, will not be welcoming a new group of peers to Jerusalem this year. Instead, the summit, taking place the first week in December, will invite some 80 to 100 existing members of the ROI Community to attend.

Nearly every year since 2006, the ROI Community’s five-day summit in Jerusalem has welcomed 120 to 150 new members ages 25 to 40 from around the globe to join the ROI Community, a network of 1,700 Jewish activists and social entrepreneurs from more than 60 countries. The community, whose initials stand for “Return on Investment,” is a project of the Charles and Lynn Schusterman Family Philanthropies and aims to create a community of “changemakers” who go on to start new initiatives in the Jewish world. Community members have access to Schusterman grants, professional development programs and connections to fellow members. The budget of the ROI Summit in recent years has been approximately $1.2 million, according to the publicly available resume of a former leader of the program.

“If I’m going to Washington, I can write in a group, ‘Hey guys, who is available? I’m going to come visit Washington,’” Lena Bakman, a member of the ROI community who is a former parliamentary assistant in Israel’s Knesset, told eJewishPhilanthropy. “And even those who don’t know me personally would meet me or suggest places to see,” added Bakman, who now lives in Germany and works as a communications executive for the Ronald S. Lauder Foundation.

The decision to limit this year’s summit to existing community members was driven by the disruptions of the COVID-19 era and wasn’t financial, said Beri Rozenberg, director of the ROI Community and an ROI member since 2016. “It will cost us the same amount to have this different summit,” he told eJewishPhilanthropy “The issue was strategically thinking how we can engage our community members better.”

In 2020 and 2021, no summit was held, and no new members welcomed. As an organization that thrives on connection, going virtual didn’t seem like an option, Rozenberg said. In 2022, the event ran as normal, but this year, rather than welcoming a new cohort of members, Rozenberg said, “We want to strengthen the current connections and have a meaningful conversation about topics that are interests of our community and, of course, the broader Jewish communities.”

During a regular year’s conference, only about 10 existing ROI members are able to attend alongside the new ones, although Israeli ROI members will stop by to meet new inductees and participate in the closing night’s party.

Current ROIer Diego Goldman helped organize one such connection point in Argentina although he wasn’t a member at the time. The year after, he was nominated to join, and today he is the director of Lazos, an organization created to better connect young Latin American Jews ages 25 to 45 to the Jewish community. Other ROI members became volunteers and donors at his organization, then later met people in the Lazos community and recommended them to join.

Existing members can nominate new members five to six months before the 2024 summit, which will return to its normal format. There was some worry that there would be pushback from members because of the change, said Rozenberg, adding, “We were concerned that members were preparing to nominate people, that they promised to refer someone. But most people were excited that they will have an opportunity to participate in a summit again.”

Bakman, who helps plan quarterly events in Germany for other ROI members, isn’t sure if she can attend the December gathering because of work but feels the change is positive. “When you invest in what you have, then you can grow even stronger,” she said.

To attend a summit, participants pay a small fee to reserve their spot, but transportation, accommodations and food are covered. “We are currently working out what the application process will involve,” said Rozenberg, “but one thing we do know [is that] choosing just 80 to 100 ROI members out of our global community of over 1,700 will be no easy task.”

Goldman is excited by the potential of being at another summit. “If I have the opportunity to attend, I will capitalize on it 100%,” he said. “I will be happy to meet a lot of people that I know and give everything that I can give to others.”

Both Goldman and Bakman already know of people they hope to recommend as members next year. Bakman said that she seeks out people with the “same spirit” as other ROI members, adding, “All of its members are very concerned about this world and want to change it for the better.”