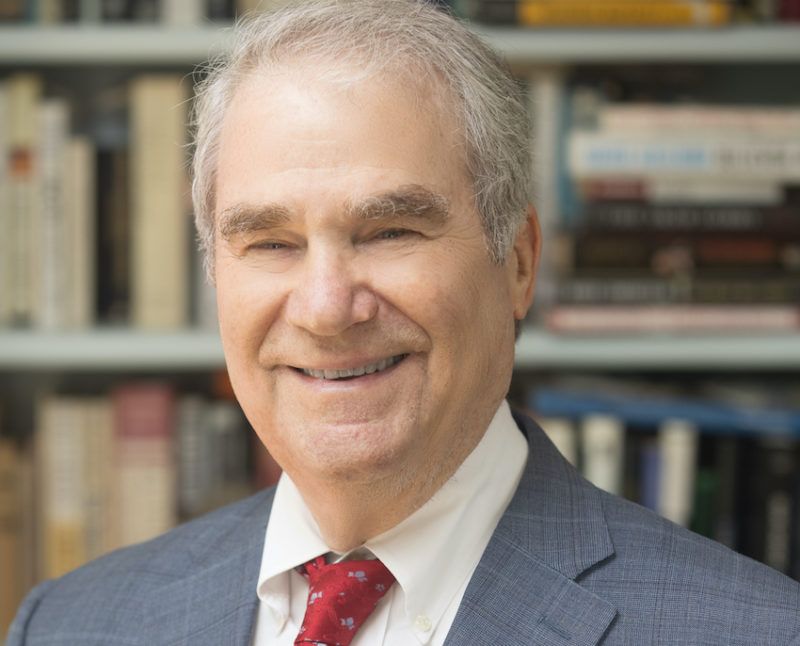 Known for high-profile clients such as singer-songwriter Barry Manilow and deposed Filipino President Ferdinand Marcos and his wife Imelda, Sandor Frankel thought he would end his career the way he started it — as a lawyer with literary leanings — until one of those clients handed him a second act. The author of four books, Frankel’s latest is The Accidental Philanthropist: From a Bronx Stickball Lot to Manhattan Courtrooms and Steering Leona Helmsley’s Billions, which tells the story of how hotelier Leona Helmsley, who served nine months in prison for tax evasion and had a reputation as a demanding employer, named Frankel a trustee of the $5.4 billion she left behind. He recently spoke to eJewishPhilanthropy.

Helen Chernikoff: Can you walk us through how the trust works? Is it intended to exist in perpetuity, or will it be “spent down”?

Sandor Frankel: It is intended to exist in perpetuity and in its entirety. The document that set up the trust provided for five trustees. Two of them have since passed away. When only one trustee is left, he will appoint a corporation to act as a trustee. The theory [is] that a corporation lasts forever, and there is a provision in the document that says this trust will last in perpetuity, and we try to achieve that. The trust disburses 5% of what it has in grants and certain expenses every year. That’s the minimum distribution. We shoot to achieve that, and we try not to exceed it, again, for the trust to last in perpetuity. We have to invest the remaining 95% in a way that the trust will retain the same purchasing power forever. We started with $5.4 billion. We have given away $3 billion. At present, we have $8 billion.

HC: Many philanthropy professionals are interested in ‘impact investing’ — part of the concept being that grant-makers screen their investments to make sure none undermine their mission. Do you have that process in place?

SF: There was an investment that had to be made in an area that might have been perceived as not conducive to people’s health. We thought about that one long and hard to make sure it wasn’t truly contraindicated for public health. We have a full-time staff of investment professionals and a committee of outside experts who oversees the staff. The investment committee meets quarterly and reviews the investment recommendations of the staff. So if the investment staff decides, for example, that an investment of $100 million — I still gape when I talk about these numbers — they can’t just go ahead and do that. They have to make recommendations in a written report. In that instance, there was a robust discussion as to whether it was appropriate or not, and it was decided to go forward. None of these investments are made willy-nilly.

HC: Did Ms. Helmsley shape the trust’s program areas in any way?

SF:  She gave full discretion to the trustees to make those decisions. That’s part of the miracle that I’ve tumbled into. I represented Ms. Helmsley for the last 18 years of her life, and I became kind of her consigliere. I oversaw the drafting of her will and the trust document. The trust had been virtually inactive during her lifetime, and when she passed away there were five of us in charge. Two have now passed away. We were not strangers, but we were also not a cohesive unit. Within months of her death, $2 billion poured in immediately, and we had to move very quickly. We decided how we would be operating at that point, with expert counsel. We now have a staff of about 90 people, and the three remaining trustees are two [of her] grandsons and me.

HC: How did the five of you decide what to fund?

SF: It was as if I was walking down the street and someone handed me a wheelbarrow full of gold and said, “Here, do good for the world.” Each of the five of us suggested areas that were of importance to each of us as individuals, and that’s how the program areas were born. It’s important to note, though, that none of us has our own checkbook. Every grant that’s given is made after a majority vote of all the trustees. However, each of us is the lead trustee of our program areas. I have two: Crohn’s disease and Israel.

HC: Do you have certain principles that guide your giving?

SF: We try to focus on specific areas where we think we can have real impact. There’s someone who is dear to me who has Crohn’s disease. It affects millions of people all over the world. There are many other diseases where it’s more difficult to move the needle in terms of research and therapies. On the Israel side, again, we can make sizable gifts and that means impact. People often ask me if Ms. Helmsley traveled to Israel, and did she give large gifts. They’re surprised when I say that she never went. But I’m a Jew, and Israel’s been the homeland of the Jewish people for over 3,000 years. It’s necessary for our survival. It’s a democracy that embraces Western values, and it flourishes in a very dangerous, sometimes fanatical part of the world, and it’s America’s ally in that part of the world. The country is a miracle so if we can contribute to that miracle, what better use of the trust?

HC: What do you say to those people who contend that Israel can take care of itself more now than it used to, given its robust economy, and that it should more quickly develop its own philanthropic sector?

SF: Israel is forced to dedicate so many of its assets to its own survival, so at the trust, we give enormous amounts to hospitals and medical care — probably about $200 million. The Israeli health system needs financial support. We can’t provide for the physical security of the country in any significant sense, but we can provide for other needs. Rambam, the hospital in Haifa, has a large underground parking lot that is convertible within 48 hours to a hospital [in the event of an attack]. We contributed $5 million toward that, and when I was visiting, the director told me that his dream was to create a research institute. He was looking for seed money, which acts like a magnet for additional capital in the beginning of a new project. We agreed to spend $18 million, and now there’s a 20-story building there that will be ready for occupancy in about a year and a half.

HC: Can you talk a bit about your personal philanthropy?

SF: What we do at the trust changes people’s lives, and what I do personally is small potatoes and they shouldn’t be mentioned in the same breath. We save lives, not just in the health sphere but in other areas as well. I remember watching the news just after the gunman attacked the synagogue in Halle, in Germany [in October 2019], and my phone rang. It was someone from the Prime Minister’s Office in Israel, and he said, “Thank you for saving lives.” The security system was built with Helmsley money that we had contributed to the Jewish Agency.

HC: Can you tell us about a grant that ended up being disappointing in some way, and what lesson you learned from that?

SF: When we give grants, there are very detailed periodic reporting requirements. We go on-site to review what’s going on. We don’t have people in Israel who do this for us. It’s the New York staff, and myself and my wife. We gave several grants to a particular hospital in Israel, and we learned that the hospital had given money to someone connected to the hospital who had interacted with us, unbeknownst to us, and in violation of the agreement that we had. And as a result of that, we terminated an existing grant and required them to return money that we had given to them. It has cost that hospital several million dollars. It wasn’t a learning experience, because we have our eyes peeled for that kind of thing, but it was an experience that showed the wisdom of keeping your eyes peeled. So far that’s been a one-off. The people who we deal with at this stage know us by reputation; they know that we are very careful with the use of Helmsley funds and that we follow their use to make sure that they are put to the intended purpose.