On Sunday Oct. 28, 2018 — one day after the deadliest day in American Jewish history — I mourned with members of Congregation Dor Hadash. The Pittsburgh Reconstructionist congregation met in the Tree of Life building and had lost one of its own, Dr. Jerry Rabinowitz (z”l). Another member, Dan Leger, clung to life. Virtually every member of the congregation had gathered in solidarity. People were understandably raw, numb and devastated. Yet, in their commitment to mutual support, I was reminded of the awesome power of Jewish community to cultivate resilience in the face of pain and threat, including violent antisemitism.

In these polarized times, discourse over how best to confront antisemitism has often been visceral and sometimes taken on hyperbolic tones. At Reconstructing Judaism, we believe there are several steps toward a vigorous and constructive fight against rising antisemitism. 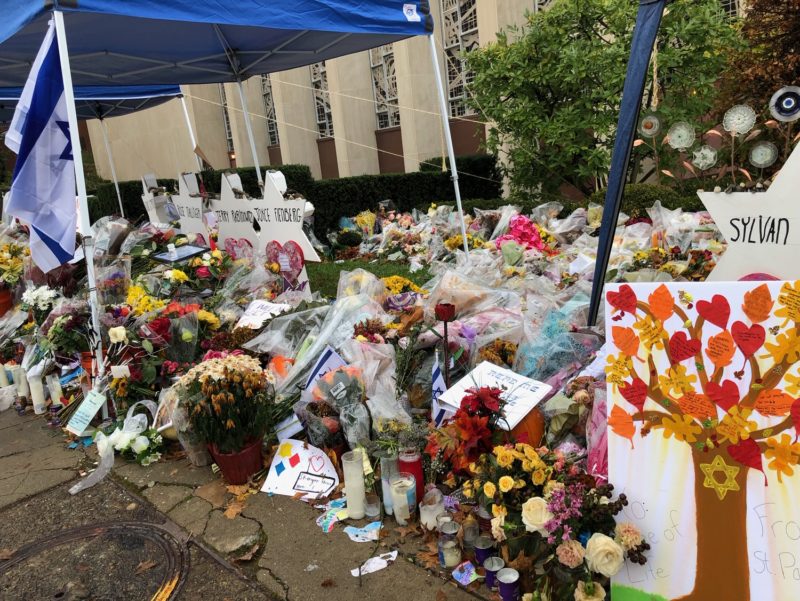 Effective coalition-building and public representation. The fight against antisemitism is not a fight that Jews can win on our own. We must build effective coalitions, both within and beyond the Jewish community. Internally, we must work on the broadest coalitions that presume that all Jews vehemently oppose antisemitism and seek conditions for Jews to flourish, and that do not draw red lines legitimating particular expressions of Jewish peoplehood. Externally, we must see and act on the concerns of allies and potential allies so that we can ask them to see and act on our concerns as well. From a pragmatic minimum, we must show up for others. From an ethical maximum, these relationships must not be transactional: they should be expressions of shared commitments and real relationships. Only then can we call allies out if and when they do not show up for us.

Dismantling systemic racism—in the Jewish community and in the broader society. Pursuing racial justice work is critically important in fighting antisemitism. It enables white Jews to untangle the ways in which we have been aided by white privilege and structural racism so that we can undo its harm to Black people and people of color — Jewish and non-Jewish — and to ourselves. Doing this work can enable us to stop ignoring or injuring Jews of color in our communities and instead to see them more clearly, to embrace them as family, to be led by them.

Bolstering democratic institutions. Fundamentally, we believe the best possible path to combat antisemitism and foster the flourishing of Jews and Jewish community is robust democracy, where pluralism is celebrated and minorities protected. We call on all individuals to defend democratic institutions, from protecting and using the franchise to supporting a free press and beyond, and to reinvigorate pluralism, seeking out and learning about individuals and communities who are different from us and building community together.

Analyzing criticism of Israel with careful scrutiny. There will always be disagreements within the Jewish community about when criticisms of Israel cross the line into antisemitism. The Jerusalem Declaration on Antisemitism helpfully suggests this line: “Denying the right of Jews in the State of Israel to exist and flourish, collectively and individually, as Jews, in accordance with the principle of equality.” When there are obvious cases, including but not limited to the depiction of Jews as greedy, demonic or world-manipulating; calling for Israel’s destruction; or refusing to participate in social justice coalitions with Zionist organizations, we and our allies must name and condemn these expressions as antisemitic. However, criticism of Israel that does not include plainly antisemitic tropes yet gives us discomfort deserves our scrutiny and careful thought. Any response must be thoughtful, honest and assertive rather than an expression of our initial visceral reactions. This is difficult yet critical work. If we fail, we run the risk of allowing distorted and reactive all-or-nothing rhetoric to sabotage important work that needs to be done.

Deepening Jewish identity. Our mission is the same in pacific periods and in times full of challenge. The bulk of Reconstructing Judaism’s resources focus on expanding entryways into Jewish life and deepening identity and connection without watering down our conception of what it means to be Jewish. This is especially important regarding the next generation. We must invest in creating robust Jewish identities for our children, biological or otherwise. The more they hold knowledge, skills and experiences about what it means to be boldly and deeply Jewish, the more capacity and confidence they will have, in general and if they unfortunately encounter antisemitism.

Let us commit ourselves once again to building a Jewish civilization that offers multiple pathways. Let us assert that being Jewish in the 21st century is about preserving and celebrating Jewish distinctiveness and about opening ourselves to transformation. We engage with traditional Jewish sources and also actively generate new ones.

Judaism should not be about affirming what we already know; Judaism should be about opening ourselves up to new ways of being—to being the best possible Jews and the best possible human beings. We may no longer believe in a supernatural God who revealed the Torah at Sinai, but we do believe that being Jewish obligates us to behave in ways that are moral and ethical, as individuals and on a collective level. We must articulate those obligations in ongoing conversations across a diverse community, and we must be willing to follow them. In this way, we can create covenantal community.

In the past three years, the members of Dor Hadash has shown us all how to respond to hate. By rebuilding their community stronger than ever. By intensifying commitments to Jewish life and ritual. By deepening ties outside the Jewish community. By raising their collective voice on critical issues ranging from gun control to capital punishment, and by grounding their activism in Jewish values.

Out of our Reconstructionist commitments, with our awareness that every generation has the obligation to reconstruct Judaism, we have an opportunity to model a path toward connection and hope in spite of those who hate us. Indeed, living fully and beautifully and in a deeply interconnected fashion is the richest possible repudiation. The Jewish people lives. The Jewish civilization lives and evolves. How are we, together, going to shape our future?

Rabbi Deborah Waxman is president and CEO of Reconstructing Judaism.