Renewing the rabbinate as a healing corps

Members of the clergy meet people in moments of suffering with care and with compassion and contribute to their healing.

Earlier this year, a clumsy comment about the images from the James Webb Space Telescope (JWST) by an astrophysicist gave fuel to creationists and science deniers. Based on her comment, they claimed that the findings from the JWST disproved the Big Bang theory. In response, the astrophysicist clarified what she meant by her statement and the science deniers were swiftly denied. Unfortunately, their claims have now been disseminated on the internet and thus will continue to do their nefarious work.

While following this minor story, it occurred to me that, although I am firmly with the scientists on this one, neither the creationists nor the scientists have much of value to offer us. What is clear is that the origin of our universe remains a mystery to us. Sure, the Big Bang theory describes events going back as far as 13.8 billion years. And yes, the Hebrew Bible opens with a description of “the beginnings of God’s creation” (Gen. 1:1). But neither offers any insight regarding how it actually all began. And, if I were a gambling man, I would confidently wager that that will forever remain in the realm of the unknown. 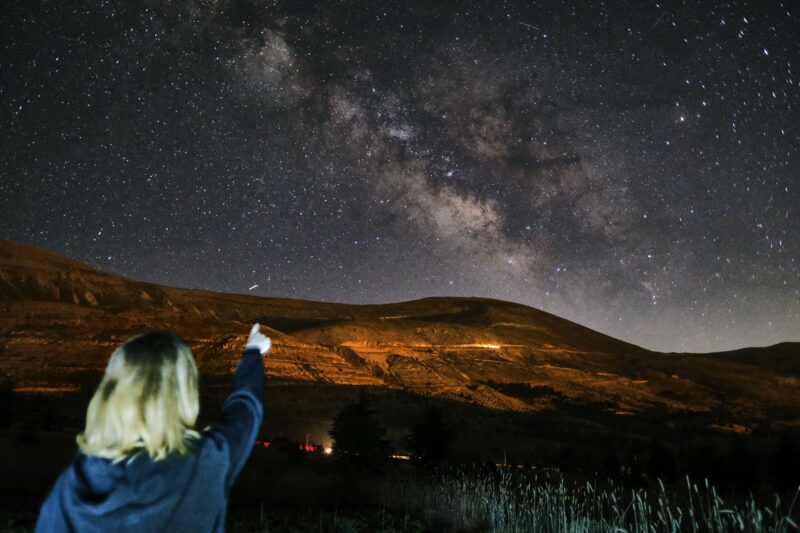 This long-exposure picture taken early on July 21, 2022, shows a girl pointing towards the Milky Way galaxy in the sky above the cedar forest reserve, also known as the Cedars of God, near the Lebanese town of Bcharre.

Herein lies the great critique of science and religion: What justification can there be for the scientific community spending $10 billion on a telescope (the price of the JWST) that takes pictures of space when millions of human beings are dying every day from hunger and preventable illness? And what value is there in a sacred book if its followers are engaged in unresolvable debates about the distant past rather than heeding its call to help those in need now?

We are living through what may be the darkest period in human history. To take just one example: the climate catastrophe means that things will undoubtedly get worse for the balance of our lifetime, and likely beyond that.

We now know that, even if we were to reduce carbon emissions to zero today, it would take 30 to 50 years for its positive impact to be felt. For Americans, that means that close to 100 million people will be directly impacted, experiencing extreme storms, wildfires, heatwaves, droughts and floods by 2050. And the rest of the population will have to bear witness to these increasingly tragic situations.

Add to that the rising threats to democracy here in the United States and throughout the world, the impoverishing effects of late-stage capitalism and a rapidly aging population (there will be close to 100 million people over the age of 65 in the United States by 2060) and it becomes clear that suffering is surely going to increase.

In the face of this stark reality a single question arises: How can I/we contribute to the healing of our human family and our planet?

At the ALEPH Ordination Program (AOP) our answer to this question is to train a generation of rabbis as a healing corps to welcome and serve with care and compassion in a variety of settings (college campuses, day schools, hospitals, synagogues, etc.) within the Jewish community and beyond.

Returning to the debate about the origins of the universe, we at AOP train rabbis to be deeply attuned to the mystery we name God. It is our experience that the cultivation of an abiding awareness of the mystery gives rise to a sense of obligation – a calling – to help reduce suffering.

We reduce suffering by being present with others in moments of pain, anguish and loss, and by drawing on Jewish wisdom, liturgy, ritual and song to ease their discomfort. Of course, rabbis also help in moments of celebration, too, but the need is greater, and the contribution more significant, when a loved one is sick; when a child or a parent or a sibling or a friend has died; when species go extinct due to human actions; when our home is under threat from an unseasonal storm; when it’s unclear if there will be enough money to get us through the month; when challenges to democracy give rise to terrible images of concentration camps flashing in the mind.

It is from our abiding awareness of the mystery we name God that we are prepared to meet people in these moments of suffering with care and with compassion and contribute to their healing.

The storm is already here, and it is only going to get stronger. Now is the time for each of us to ask ourselves, How will I serve?