Paikin was ordained by the Reform Hebrew Union College-Jewish Institute of Religion and has worked or studied in a range of Jewish communities, including the Hadar Institute in New York City and Sixth & I synagogue in Washington. 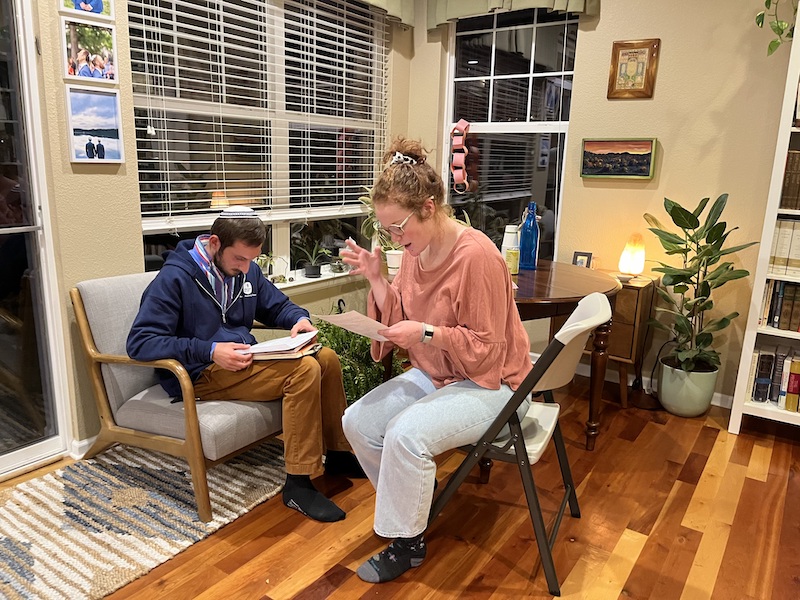 A Torah study program in October 2022 at the Base house in Denver, Colo.

For much of the past two years, Rabbi Jesse Paikin found himself separated from his wife, who lived mostly in Washington, D.C., while he, a native Canadian, waited in Toronto for his green card. But that ordeal is now over, and Paikin, reunited with his wife, is on the third day of a job whose mission is, at least in part, to counteract isolation by drawing young Jews together at the homes of rabbis and their spouses or partners across the country.

As of this week, Paikin, 39, is the executive director of the Base Movement, a network of 11 rabbinic couples spread across eight cities, from Oakland, Calif., to Chicago to New York City to Miami. Some work on the initiative part-time, and two more Base houses are set to open in New York and Los Angeles. The couples organize experiences and serve as spiritual resources for young adults – hosting Shabbat meals, teaching Jewish classes and engaging in community service. Last year, more than 3,300 people took part in programming of some kind in the Base network.

The goal of the Base couples is to serve young Jews. Paikin sees it as his goal to serve the couples. “Really drawing on skills that come from the worlds of psychotherapy and mentorship and coaching — I think we can provide those kinds of skills to help people,” he told eJewishPhilanthropy. Training in those fields, as well as in fundraising, could come from him or from local experts in the Base couples’ cities, Paikin said.

Paikin was ordained by the Reform Hebrew Union College-Jewish Institute of Religion and has worked or studied in a range of Jewish communities, including the Hadar Institute in New York City and Sixth & I synagogue in Washington. He spent his recent time north of the border engaged in work and study that he feels have given him training to support the Base couples – a research fellowship with the Jewish educational organization M² focused on Jewish pedagogy, a master’s degree at Columbia University Teachers College in spiritually focused clinical psychology, as well as a podcast answering Jewish questions.

Paikin replaces Faith Bingham Leener, Base’s founding executive director, who oversaw Base’s 2021 move from affiliating with Hillel International to being under the umbrella of Moishe House, whose houses in cities across the globe serve the same demographic as Base couples. Base houses have an average annual budget of roughly $200,000 each, supported by a mix of national funding and local philanthropy. Moishe House’s 2022 budget was approximately $18 million.

“Our hope with Base is that not only are the existing Bases continuing to be strong and vibrant, but we’re expanding and scaling the number of young adults who are in relationships with great rabbis and educators,” said Moishe House CEO David Cygielman.

Paikin believes that there’s demand for the kind of community Base couples offer. He pointed to a new program by the fitness company SoulCycle called “Peoplehood,” sometimes styled “PPLHD,” which invites people to sit in a circle, have deep, honest conversation and do some light stretching. It’s the kind of practice, Paikin said, that Jews have been engaging in since ancient times.

“All they’ve done is commodified something that Base has already been doing,” he said. “People want to be able to bring their full selves and be addressed in a way that says, ‘Who are you, and what are you looking for?'”