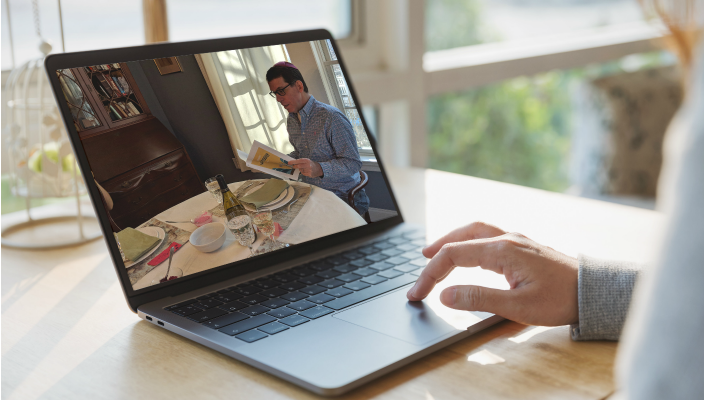 The continuing pandemic and imposed health restrictions have prompted the Conservative movement’s Rabbinical Assembly to retain the leniencies instituted last year regarding food restrictions and family gatherings during Passover, which begins at the end of the month.

“When my subcommittee wrote this year’s recommendations, we wanted to be sensitive to the fact that many people are still not living lives that in any way resemble pre-pandemic times, particularly around food and gatherings,” explained Rabbi Aaron Alexander, chair of the Kashruth Subcommittee of the Rabbinical Assembly’s Committee on Jewish Law and Standards.

The guidelines note for the first time, Alexander said, the difficulties that some people may experience getting food during the pandemic, some of which arise from the use of shopping apps in which customers select items online and a third party or grocery store employee does the physical shopping. “It has become quite common for many folks to use food-shopping services in which individuals shop on behalf of others and drop products off at the door,” he said. “While not inherently problematic for Passover, it is not uncommon for shoppers to substitute similar items for others, grocery stores often mismark products with their own signage, and kosher sections can be confusing for the inexperienced Passover shopper.”

The new guidelines stress that “those who utilize these services specify precisely what it is they prefer in the days before Passover, and certainly during the holiday itself. … Some services provide options for flagging ‘no substitutions,’ which should be utilized whenever possible. We also strongly recommend those who use those services to be extra judicious in checking their orders for accuracy at delivery.”

In an interview with eJewishPhilanthropy, Rabbi Alexander said another reason last year’s guidelines are still necessary is that a “lot of people lost their jobs [because of the pandemic] and Passover items can be very expensive.” The guidelines, he said, allow people to be “strict or lenient within reasonable boundaries so they can enjoy the festival.”

Although most families stayed home for Seders last year, Alexander expects more people to travel this year. But he said he believes communal Seders will continue to be restricted to Zoom.

The Centers for Disease Control and Prevention released new guidelines Monday spelling out how Americans who have been fully vaccinated can host small gatherings in their home with other fully vaccinated people. Dr. Anthony Fauci, director of the National Institute of Allergy and Infectious Diseases, explained the new guidance during a press briefing last week.

Nevertheless, this year is still expected to see many Zoom Seders.

“I think… that people will be more adept at using [Zoom],” said Rabbi Rick Jacobs, president of the Union for Reform Judaism. “I had a Seder last year with my California family, something I have not had in 25 years. It is not the same as being in my house, but we were with them.”

He noted also that “in the old days when you would have a Seder at home, there would not be enough room at the table for everyone you wanted to invite. Now with Zoom you can invite everyone and don’t have to worry about space.”

“For me, one of the hidden blessings of Passover is to get to the essence of what the holiday is all about,” Jacobs continued. “Many people feel the holiday is inauthentic if they can’t find kosher-for-Passover marshmallows or don’t have a shank bone for the seder plate. The Jewish tradition is to substitute. You can use a beet for a shank bone, for instance. We don’t need all the stuff we think we need for Pesach, and I found that liberating. Do I really need to have both brisket and chicken? What would happen if I just had chicken? I want to empower our families to be creative and make as much of the ritual as we can. I’m not a scrooge, but I try to model a simpler holiday.”

Although Rabbi Maurice Harris said he believes Zoom Seders will be popular this year within his movement, the associate director of thriving communities at Reconstructing Judaism said he hopes this year will be the last of them.

“You can quote me as saying, `Dayenu’ [Enough],” he said with a chuckle.

“I’m certain our rabbis will be encouraging their families to use Zoom,” he said. “What I hear is that they are concerned about people who are less adept with the technology, have few friends or family and who don’t know how to join a Zoom Seder without help. The biggest challenges are social, not halachic [Jewish law]. A lot of our rabbis and volunteers are busy trying to connect people with each other, and I know that is true with the other movements, too.”

A spokesman for the Orthodox Union said his organization was still writing its Passover guidelines. Its guidelines last year asked congregants to observe the holiday at home, keep shopping trips to “the bare minimum,” and suggested that congregants throw in the trash or crumble and flush chametz — leavened bread — that must be disposed of before the start of the holiday.

The Haggadah read during the Seder tells the story of the Israelites’ escape from slavery in Egypt more than 3,000 years ago, a story that includes telling about the Angel of Death whom God sent to kill the firstborn sons of the Egyptians. When that happened, the Haggadah reads, “a great cry of mourning was heard throughout the land.”

Jacobs said the story of the Angel of Death has particular resonance this year. “I don’t know of many people who have not had a visit from him. My mother died in April. The reality is real and we appreciate blessings even more. So when we say the ‘Shehecheyanu’ blessing this year at the beginning of the Seder, we are going to really mean it. We made it through a fearful year, let’s draw strength from the ritual.”