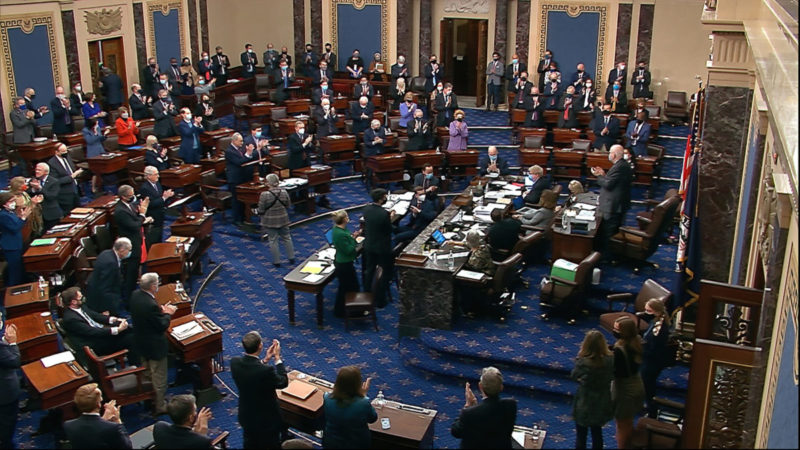 Senators stand and applaud support staff before the final vote on the Senate version of the COVID-19 relief bill in the Senate on March 6, 2021; AP photo

The Senate’s 50-49 passage of a $1.9 trillion coronavirus relief package on Saturday was hailed as a significant victory by Jewish community leaders who had lobbied legislators to include more provisions to support nonprofits and human services.

The package includes a range of provisions for which the nonprofit community had advocated, including an expansion of the Paycheck Protection Program allowing larger nonprofits operating in multiple locations to qualify for loans as long as they do not have more than 500 employees in any one location. It also provides a significant increase in unemployment reimbursements for self-insured nonprofits, as well as aid to state and local governments and an increased child tax credit.

The package’s passage came at the conclusion of an amendment process that ran for more than 24 hours into midday Saturday, which included the longest single vote in modern history of the Senate.

“We’re delighted,” Elana Broitman, Jewish Federations of North America’s senior vice president for public affairs, told Jewish Insider. “This is another major bill that addresses the difficulty of the pandemic on the communities we serve… and also the bottom line of the nonprofits that need to keep their doors open to continue to provide… services.”

Jody Rabhan, the chief policy officer for the National Council of Jewish Women, said the bill “will do more for the economy, families, individuals, than any legislation in the last 20-some years.”

Although the bill passed with only Democratic votes in both houses, Broitman said that the provisions of interest to the nonprofit community were “true bipartisan efforts.” Polling has indicated that the bill is popular with the American public broadly.

In a win for religious schooling advocates, the Senate also added an additional $2.75 billion in designated aid for non-public schools — matching the amount included in the December 2020 relief bill and replacing a more limited funding stream that the House had included in its relief bill. Under the provisions in the Senate bill, non-public schools also deal directly with state education agencies to apply for funding, rather than going through local school districts to determine what spending is covered. Orthodox Union Advocacy Center Executive Director Nathan Diament credited Schumer, as well as Sen. Ben Cardin (D-MD), for spearheading the effort to include the funding.

“Much of what we were seeking is in the bill, and I will say very significantly thanks to the leadership of Senator Chuck Schumer, but also with the help of Senator Cardin as well as some others,” Diament said. “We’re very grateful to Senator Schumer for having led this particular piece. It was not without resistance.”

Schumer told JI that he sought to ensure that all students had access to sufficient resources to weather the crisis.

“The bottom line is that this pandemic has hurt every school and every schoolkid, and we should do all we can to help each and every one of them confront and overcome the COVID crisis, both public and private,” the New York senator said. “This fund, without taking any money away from public schools, will enable private schools, like yeshivas and more, to receive assistance and services that will cover COVID-related expenses they incur as they deliver quality education for their students.”

The provision in the latest bill is not identical to the one included in the December 2020 bill — it does not lay out what expenses are eligible for funding, as the December bill did. The bill also prohibits the money from going towards reimbursements for COVID-related expenses, a change from how many state education departments are distributing funding from the December package, according to Diament.

“We’re going to have to work with the Department of Education to put it in a format that’s workable for the schools,” Diament said. “Senator Schumer’s staff has said he put the money in so he’s committed to helping us work with Secretary [of Education Miguel] Cardona and his team on implementation.”

Republican Sen. Bill Cassidy (R-LA) proposed an amendment that would have changed the bill’s language to apply the rules for non-public school funding included in the December package, but the Senate voted it down along party lines at 3:35 a.m. on Saturday.

“It would have been much more clear and simple,” Diament said. “It’s kind of a shame that it was done at the point where basically Democrats were voting down all amendments, even though we had expected that some Democrats would have voted for the amendment.”

The inclusion of dedicated funding for non-public schools riled the National Education Association — the nation’s largest teachers’ union — which released a statement “convey[ing] our strong disappointment in the Senate’s inclusion of a Betsy DeVos-era $2.75 billion for private schools — despite multiple avenues and funding previously made available to private schools.”

According to a lobbyist familiar with the negotiation process, Sen. Patty Murray (D-WA), the assistant Senate Democratic leader, sided with teachers’ unions as a vocal opponent of the non-public school funding during negotiations.

“She is an advocate for the views of the public sector unions like the NEA and the [American Federation of Teachers],” the lobbyist said. “They’re opposed to any money going to help any kind of non-public schools in any circumstances, including a global pandemic. They don’t really believe that we’re all in this together.”

Murray did not respond to a request for comment.

JFNA’s Broitman highlighted other provisions of interest to the federations’ umbrella group in the package, including ones she said could give homebound seniors access to vaccines through both transportation to vaccine sites and mobile vaccinations; she also cited programs including increased funding for older Americans, nutrition assistance and child-care block grants.

The bill also provided an additional $510 million for the Emergency Food and Shelter Program, which JFNA has “been a key proponent of,” Broitman said. The EFSP program supports programs like food pantries and rent assistance.

“We’ve all seen the stories about the long food lines, the worries about eviction,” she said. “There are a number of Jewish human service agencies that serve these populations, so being able to get the data about the suffering of the communities [to lawmakers] was really helpful.”

Despite these victories, Jewish nonprofits were not able to push through all of the changes they’d hoped would be incorporated into the final legislation. JFNA had been lobbying senators for further increases in unemployment insurance reimbursements — from 75% in the bill as passed by the House to 100% — as well as an extension of the application deadline for PPP loans, but neither change was included in the Senate’s finalized bill.

With no further COVID relief bills on the immediate horizon, Broitman acknowledged there may not be another opportunity to push these changes through in the near future. But, she added, JFNA will monitor data from federations and agencies to assess future needs and pass that information along to lawmakers as they contemplate future legislation.

Despite her praise for the bill, NCJW’s Rabhan explained that the legislation was limited in what it could accomplish because it was passed under budget reconciliation, a method allowing the Senate to bypass the filibuster on certain tax and spending bills.

Reconciliation rules forced the Senate to strip a federal minimum wage increase out of the bill, and led the House to set aside national paid leave from the start, according to Rabhan.

“There are limitations to reconciliation,” she said. “It’s like all things in politics and you’re weighing the pros and cons. The Democrats determined the best way to get the president’s rescue plan through was through reconciliation.”

During last-minute negotiations on Friday, the Senate also scaled back plans for unemployment benefits, primarily because Sen. Joe Manchin (D-WV) opposed Senate Democrats’ original, more ambitious plan. Under the terms of the current bill, the Senate may have to scramble to pass another extension of unemployment insurance, which currently runs out in early October before going on recess in September, Rabhan noted.

Since the Senate made revisions to the version of the package the House passed in late February, it will now return to the House for expected final passage on Tuesday, before Congress sends it to President Joe Biden for his signature.

Nonprofits are struggling to survive, organizational health tools can offer a lifeline

Tired of gender talk? I’m not!

We can — and we should — support Jewish preteens and parents now

Why invest in community visioning and support?