Candles of Hope, brought to life by a mother-daughter team, is taking the painful issue out of the shadows and pointing women to much-needed services 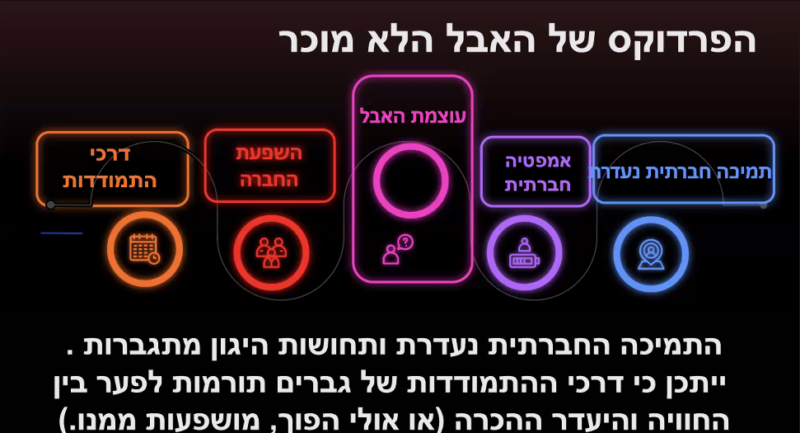 When Elysa Rapoport lost her first baby girl in 2016, born without breath at 31 weeks, she found herself lost and alone. The Australian immigrant to Israel felt that the health system handled her traumatic experience of stillbirth “horribly,” lacking sensitivity and offering little professional support.

Grappling with waves of grief, it took 10 months after her stillbirth for Rapoport, 37, to gain a spot in a support group in the city of Rishon Lezion, more than a half-hour’s drive from her home in Tel Aviv. She found the experience of meeting other women who had similar experiences, coupled with the moderation of trained professionals, a saving grace. But 10 months of waiting for a spot to open was 10 months too long, and she resolved to help ensure that no more women would have to endure such an agonizing wait for much-needed support.

A year later, Candles of Hope was born. Last month, the NGO, helmed by Rapoport, held its first national conference dedicated to the subject of pregnancy and infant loss, shining a light on an issue often hidden in the shadows — to the detriment of those affected.

Candles of Hope was founded by Rapoport together with her mother Rebecca Dreyfus, who flew from Sydney to Tel Aviv to lend comfort and support to her grieving daughter following her stillbirth. Frustrated by the lack of institutional support available to her daughter at the time, Dreyfus was the driving force behind the founding of the group.

Candles of Hope is acting as an umbrella organization and has centralized information in Hebrew and English about relevant groups, organizations and individuals on its website. “There are services but it’s all very scattered,” Rapoport told eJewishPhilanthropy.

Dreyfus worked tirelessly, traveling between Australia and Israel, and making use of her broken Hebrew to connect with and between frontline professionals on pregnancy and infant loss. She continued to do this while fighting a long battle with cancer, until April this year when she died at age 63, just one month before the conference she and her daughter had worked so hard to make happen. “She is today a candle of hope,” Rapoport said during the opening speech of the online conference on May 26, which was dedicated to her mother.

The conference, which attracted 120 people, featured speakers from various fields including therapy, research, the arts and media, advocacy and public leadership. Nurses, midwives and people who had experienced loss also participated.

The name of the organization was inspired by the memorial candles traditionally lit for the deceased, and the hope that shines out of the light; for many, that hope is connected to a future pregnancy, and for others it represents hope to move forward to a positive place.

“We see hope as so central and critical to healing,” Rapoport explained.

Announcing the conference on May 10, a day after Mother’s Day, in a rare personal Facebook post, Rapoport wrote:

“Although Mother’s Day is supposed to be a happy day to celebrate mothers, let’s take a moment to recognize the sadness of those of us that no longer have our mothers with us, and those of us who may have experienced pregnancy or infant loss, and didn’t get to mother those cherished babies. And most importantly, in my mother’s memory, and as she always did, let’s all strive to turn sadness, loss and adversity into action for good.”

Rapoport is far from being a rare statistic, and Candles of Hope seeks to provide a readily available support system to all those who will sadly but inevitably experience loss of this kind.

In Israel, the rate of pregnancy termination is some 10 percent of all known pregnancies, Professor Danny Horesh of Bar Ilan University’s psychology department told the conference. Stillbirth occurs in 3.5 to 5 of every 1000 deliveries.

Post-Traumatic Stress Disorder (PTSD) is well-known in Israel, but not its link to pregnancy issues. Horesh pointed out that Israeli trauma studies tend to focus on combat-related experiences, as well as other traumas related to the country’s security situation. Only recently have researchers begun to study PTSD following stillbirth and infant loss.

Research co-published by Horesh in 2018 found that pregnancy loss “is a potentially-traumatic experience, entailing a heavy burden of PTSD and MDD (Major Depressive Disorder.)”

“The time has come — and thus this conference — to recognize the potential distress of a stillbirth,” he said. “Awareness is the name of the game.”

Awareness and recognition of a bereaved parent’s need to grieve are also essential.

Former Knesset member Aliza Lavie wrote a law in 2016 that entitles maternity leave benefits to women who give birth to a stillborn baby as early as the 22nd week of pregnancy.

Lavie has also advocated for the Israeli healthcare system to provide timely psychological and social support for women who have experienced stillbirth, from the moment of getting the devastating news through the entire medical process, burial and return to one’s community. She spoke at the conference of the importance of a protocol of giving bereaved parents full information and choice about the burial of their baby — but several participants remarked that this was still not being implemented in the hospitals.

Acknowledging that it takes time for changes to be implemented, Lavie told the conference that a united effort by people from various sectors is key: “Working together is the secret to fixing and changing bureaucracy.”

Rapoport believes the situation has improved since her stillbirth, but still has a way to go.

“Each hospital is supposed to assign a social worker to manage these cases and they are supposed to be trained in how to delicately handle these cases, but in reality it doesn’t necessarily happen,” Rapoport told eJewishPhilanthropy.

“It’s an ongoing problem that hasn’t been sufficiently addressed and that is something that we are working on. We would like to now work with hospitals to try and close the gaps,” she adds.

The Candles of Hope board received an overwhelmingly positive response to the conference, with participants noting the void in available services and expressing appreciation for an event focused exclusively on this topic in a dedicated and open forum. The content included a session about men’s experience of pregnancy and infant loss, which is often overlooked.

“People really appreciated it because it gives recognition to their suffering and it’s such a taboo subject that is not openly discussed, and people felt like it gave them legitimacy,” Rapoport said.

Rapoport, who is now a business consultant and mother to two young daughters, said her mother never allowed her to neglect her volunteer work for Candles of Hope.

“None of it would have happened without my mum. She brought all the board members together. She was a pusher and a fighter, and when she wanted something to happen she made it happen,” she says.

“Every time I spoke to her she was always pushing me forward, and now that she’s gone there is no way I will drop the ball —because I owe it to her.”