After the success of his ‘(Unofficial) Hogwarts Haggadah,’ Rabbi Moshe Rosenberg looks at the Passover story in a new light 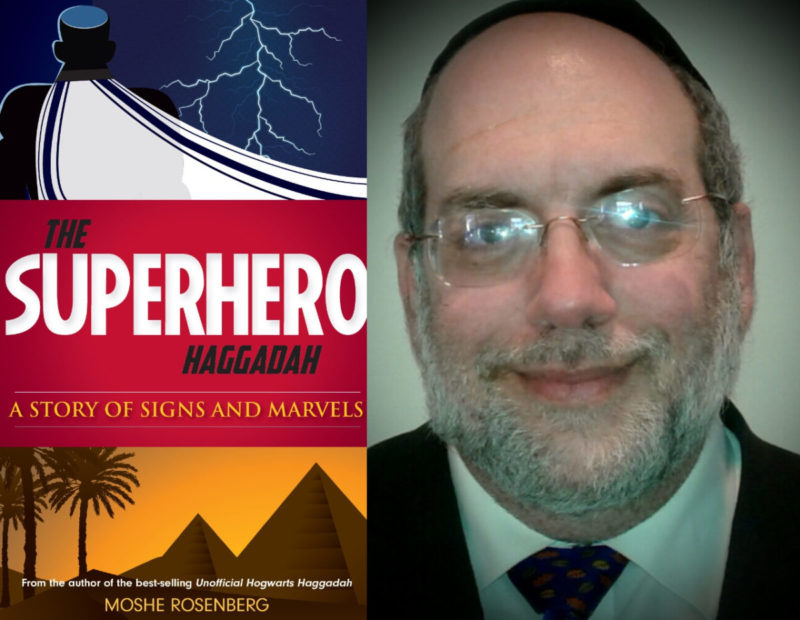 When the U.S. went into lockdown at the start of the COVID-19 pandemic nearly a year ago, Rabbi Moshe Rosenberg — a congregational rabbi and educator in Queens — did what millions of other Americans did to keep busy: He turned on his TV. At the suggestion of his children, he turned to the Marvel cinematic universe, comprising 23 superhero films that clock in at an astounding 50 hours. The result was not just weeks of entertainment; Rosenberg used what he learned from the films to create The Superhero Haggadah: A Story of Signs and Marvels, available online this week.

Rosenberg’s haggadah uses the stories of the Marvel superheroes to discuss serious moral issues, like human character, how to use power for good rather than evil, the meaning of freedom, and so on – major topics that are also referenced and debated in Jewish texts. “You can understand Torah better when you have a frame of reference outside of it,” Rosenberg told Jewish Insider in a recent interview over Zoom, noting that literature and the Torah can “mutually illuminate” each other.

“These people have very human issues,” Rosenberg said, referring to the franchise’s superheroes like Iron Man and Spider-Man. Take, for example, the Incredible Hulk: “The Hulk is half-monster and half-person, and [he] doesn’t know exactly which one he is,” Rosenberg, who was an English major at Yeshiva University, explained. “How is that different from Moshe Rabbeinu – Moshe being raised as an Egyptian prince, but at the same time as a Jew by his mother, and not being exactly sure which one is true?”

Rosenberg is a respected Orthodox religious figure; he teaches Talmud at SAR Academy in the Bronx, and when he spoke to JI, he sat in front of a wall of seforim, or Jewish books. But secular texts have always mattered to him, too. For years, the Harry Potter series was a pillar of Rosenberg’s work.

The Superhero Haggadah is his second foray into haggadot – his (Unofficial) Hogwarts Haggadah, published in 2017, was briefly a viral phenomenon. “It was covered everywhere, in America and in Israel and in European countries.” Rosenberg pointed out that for a time, his haggadah was the 12th-bestselling book on Amazon, besting a book by Chelsea Clinton that came in at #13.

Rosenberg used to run a Harry Potter club at SAR, having his students write essays related to J.K. Rowling’s fictional characters. “There was a chance to actually get them to write and enjoy writing about Harry Potter and Judaism, or lessons of life that [they’ve] learned from Harry Potter,” he said. “You connect the dots, and you don’t even try to teach them from Jewish texts. You can teach them the same lessons and help make them appreciate it from something that they’re already reading and enjoying and loving anyway.”

It was Harry Potter that first led Rosenberg to Marvel. At an SAR fundraiser raffling off prizes for students, one parent won a customized Harry Potter-inspired short story written by Rosenberg. But the parent’s child was more of a Marvel fan than a Harry Potter fan, so Rosenberg found a way to insert Iron Man into a pivotal scene in the final Harry Potter book.

Until COVID-19 hit, Rosenberg had only seen a handful of Marvel movies. But then, at the start of the pandemic, Rosenberg was undergoing radiation treatment for prostate cancer. “I was an emotional wreck, and I was physically weak,” Rosenberg recalled. His seven children, he said, “wanted to help distract me, and they came up with a list of Marvel movies that I should watch. And they made sure I watched them by watching them with me.” Rosenberg is now disease-free.

He realized that like Harry Potter, the Marvel characters offered a window into life’s big questions. Over the years, Rosenberg had written a couple other books on Harry Potter and Judaism, including the Muggle Megillah for Purim, but they didn’t get much pick-up. He quickly learned that haggadot sell: “Everybody wants a novel haggadah, and … everybody wants to do a gift of a haggadah,” he said. So he started writing a superhero-themed haggadah last summer when he finished the Marvel movies, not expecting that the Jewish community would be approaching a second year of Zoom seders, or certainly much smaller seders than normal.

“I made sure that this haggadah could stand by itself. It’s not COVID-reliant,” Rosenberg said, although he said he does mention the coronavirus in one essay in the haggadah. He references a movie scene in which Iron Man and Spider-Man are discussing the suits they wear, questioning whether the suit alone gives them their powers or if they must also look internally, thinking about their character when they take off the suit. The lesson from Iron Man, Rosenberg explains, is that “you have to understand yourself and who you are before you put on the suit.”

He connects that story to Moses and the 10 Plagues against the Egyptians, when God tells Moses to use his hand to bring the plagues, rather than a staff. The message —  quit depending on a prop. At the end of that essay, Rosenberg brings in the pandemic: “We’ve lost our suits. We’ve lost the supports that we have had” prior to the coronavirus,” he explained, like “being able to come together physically in terms of the celebrations that we have, being able to go to the synagogue, being able to touch each other. We’ve lost so much.” And, he concludes, “when you get back the suit, will you know what to do with it?”

Rosenberg dedicates the haggadah to the superheroes of the pandemic: medical workers and first responders. He maintains that the haggadah isn’t just for Marvel die-hards, though he thinks there are more of them out there than one might expect (and, he made sure to point out, his kids scrupulously placed spoiler alerts above any text that would reveal major Marvel plot points). “When it comes down to it,” Rosenberg told JI, “this is more about understanding what it’s like to be human – and understanding what a superhero really is.”