And after the destruction of the Temple, we actively transformed Judaism into a different – and may I say more evolved – religion. With the Temple gone, we put the emphasis on mitzvot, good deeds, justice and life-affirming rituals. The destruction hastened what Maimonides considered an “ascension” to a higher level of relationship with God.

I thought about Tisha B’Av recently, as I stood in Jerusalem’s Davidson Archeological Park (thank you, William Davidson Foundation!). There, you can walk on the very street that Jews used, 2,000 years ago, to ascend to the Temple of Jerusalem. You can see the remnants of the stairs that led to the Temple entrance though Robinson’s Arch, the oldest overpass in the world, and most poignantly, you can see the stones from the Temple compound that Roman soldiers threw onto the street below as they destroyed the holy site. As if one needed proof, one of those stones is inscribed with the words “lebeit hatoke’a,” meaning, the place from which the shofar was sound in the Temple’s esplanade.

All that is incredibly emotional and magical. For a minute, I felt a sort of cosmic nostalgia, as though I could be myself climbing onto the Temple Mount with thousands of pilgrims from all corners of ancient Judea. But as I continued with my revelry, I must admit that the magic broke somehow. Do I really want to see how animals are sacrificed and the high priest sprinkles their blood on the altar? Do I really believe that God demands offers of incense? I mean, I love a good barbecue, but do I really want my faith to be celebrated that way? 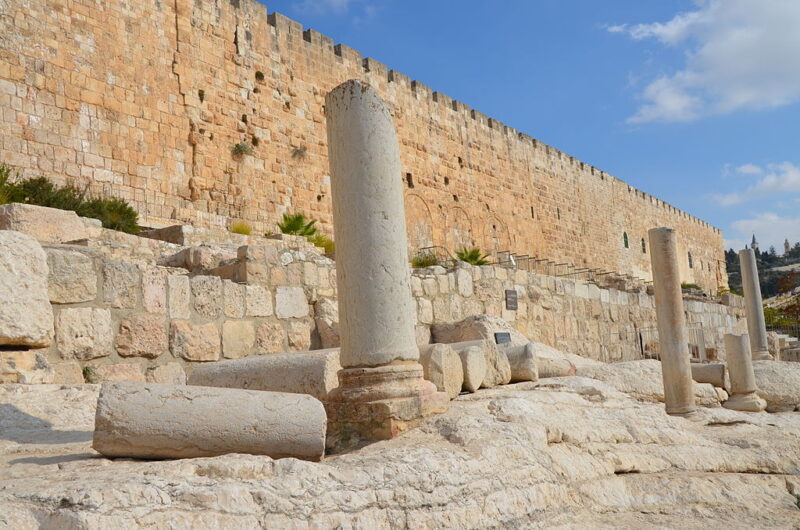 The word “nostalgia” comes from the Greek “nostos” (return) and “algos” (pain). We yearn to return, but we know that a return is impossible, and hence the pain of a lost place and a lost time. But there’s something sweet about nostalgia too, because it allows a certain connection with the past without really needing to go back to it, something that, deep inside, we may not want.

And that may be because the healthy attitude towards pain and suffering is letting ourselves be transformed by it, and hopefully emerge on the other side of grief as better versions of ourselves.

The Jewish attitude to our greatest national loss was twofold: introspection and transformation. After the churban (destruction) we asked ourselves what in our behavior as a people contributed to our demise (famously, the rabbis identify sin’at chinam, internecine hatred, as the culprit). The idea was not to wallow in guilt — after all Judaism rejects a simplistic view by which calamity is always a punishment for a sin — but to strive to be better.

And after the destruction of the Temple, we actively transformed Judaism into a different — and may I say more evolved — religion. With the Temple gone, we put the emphasis on mitzvot, good deeds, justice and life-affirming rituals. The destruction hastened what Maimonides considered an “ascension” to a higher level of relationship with God. If in the past people needed the blood sacrifices to express their faith and establish a relationship with God, said Maimonides, human intellect evolves and allows us to have a more “mature” relation with the Creator; one based on ethical behavior and prayer. Sacrifices were, in fact, according to Maimonides, a concession to human feebleness rather than God’s desired form of worship.

In sum, Judaism responded to the tragedy of the churban with a commitment to our own improvement and a revolutionary transformation of our faith. We used tragedy as a springboard for transformation.

This is not, of course, a glorification of suffering. Nor is it a cosmic “sour grapes” attitude. The destruction of the Temple and our subsequent exile was a tragedy for which we mourn. Judaism abhors both physical and emotional pain, and we don’t relish in martyrdom or self-flagellation for the sake of “purification.”

But once tragedy strikes, we have choices, and our attitude matters. We can either become bitter or become better. We can cling to a past that won’t come back or usher in a new phase of our lives that may even be better.

We remember something with sweet nostalgia, as opposed to all consuming sadness, when we manage to let it go. Letting go is one of the hardest things to do, but probably, one of the most necessary. There is a story of a tightrope walker who falls to the ground. He was found lifeless on the floor, clutching that pole that acrobats sometimes use to maintain equilibrium while walking on the tightrope. “Had he let go of the pole” remarked somebody “he could have grabbed the rope and been rescued.”

And that’s what we did. We let go of the Temple, we opened up for transformation, and thus we survived.

We do feel nostalgia: We break a glass on weddings in memory of the churban and we mark Tisha B’av as the saddest day in our calendar. But we moved on. Thus, we became the only ancient culture that managed to outlive the loss of the focal point of its faith.

We are all hit by tragedy. Suffering is one of the few true universal experiences, but can we transform tragedy into inspiration? Can it become an engine of improvement? Can we let go of the past and dream of a better future, even as we grieve? Judaism says we should at least try.

This is as important for individuals as it is for communities and societies. We are still reeling from the millions of deaths that the COVID-19 pandemic has brought. What are we going to do with that tragic and traumatic experience? What do we need to “let go” in order to emerge better and more resilient of this universal ordeal? We may mourn the “old normal,” but can it be revived? Most importantly, should it? Isn’t this an opportunity to rethink our communities and our societies? Can we cross this wilderness of grief and confusion and arrive in a promised land of compassion and growth? As hard as that is, it’s better than walking in circles in the wasteland of our sorrows.

Jews did it in 70 CE. As they reeled from an unimaginable calamity, they bequeathed us a culture and religion that sustained us for millennia.

Like them, in our hour of turmoil, we have choices, and those choices will determine our future.