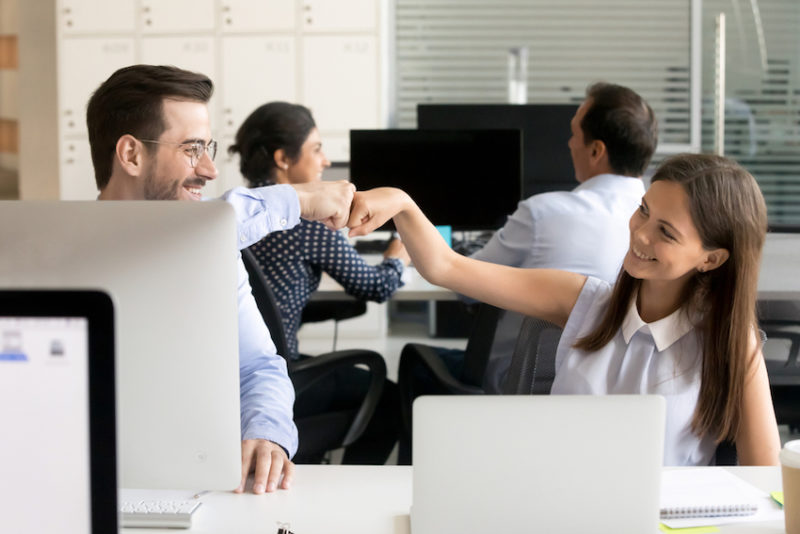 As organizations shift to a post-pandemic work environment, many are reevaluating their internal cultures and structures to better suit a workforce that has spent the last 15 months largely in a remote capacity.

“It’s a way of saying thank you,” said Young Judaea CEO Adina Frydman, whose organization is giving its employees an unsolicited, paid vacation in September, between Yom Kippur and Simchat Torah. “It gives our staff renewal, reflection and relaxation. It’s like our own mini-Shmita,” she added, referring to the Biblical concept of the sabbatical year, in which Jews are required to let their land rest every seventh year. The next Shmita starts on Sept. 7.

As COVID-19 vaccination rates rise, virus case rates continue to drop and mask mandates end, the possibility of a return to the office has catalyzed a burst of experimentation among Jewish nonprofits seeking to seize the best of what both remote and in-person work has to offer.

According to Gali Cooks, CEO of Leading Edge, most Jewish organizations are not planning to return to their pre-pandemic norm. “This is a paradigm shift in the way we see office work,” Cooks said.

While some big corporations, including banks like Goldman Sachs and Morgan Stanley, have either signaled or made explicit the expectation that workers will return to the office full-time, others are trying some form of hybrid arrangement that combines in-person and remote schedules. More than half of workers say they want to keep working from home, according to a survey by the Pew Research Center. Amazon softened its back-to-office mandate in response to employee resistance.

The Jewish nonprofit world does include some organizations that intend to restore a full-time, office-based work culture, Cooks said, but they are in the minority. They tend to own their buildings, and are located in places where commuting does not put employees at risk. Employees at the Jewish National Fund-USA (JNF-USA), a fundraising organization, will work either remotely or in an office, but not both, said CEO Russell Robinson. “If you’re working within an area where we have an office, you have to come into the office,” he said. “The spontaneous, five-minute meetings are the most important.”

“If you’re working within an area where we have an office, you have to come into the office,” he said. “The spontaneous, five-minute meetings are the most important.”

The pandemic did teach JNF-USA, however, that under the right circumstances remote workers can be successful, and the organization is now more open to hiring them. However, they must have a private officeand have enough space to store office supplies. It’s no longer acceptable to work from one’s bathroom, as employees sometimes said was necessary during the pandemic, Robinson said.

Prior to the pandemic, many of Young Judaea’s U.S.-based employees worked in an office space the organization leased in Manhattan, Frydman said. When the High Holidays and their mini-sabbatical is over, those who live in or near New York will likely meet once or twice a week, and the organization will bring everybody else together for quarterly retreat-style meetings.

The Jewish United Fund of Metropolitan Chicago (JUF), the city’s federation, is planning a schedule that will include up to two remote days a week, JUF Chief of Staff Jim Rosenberg said.

The Jewish Education Project, a training and professional development organization, will be shortening some of its work days. Starting Oct. 4, the group will implement a schedule that mandates in-office work on Tuesdays and Wednesdays from about 10 a.m. to 4 p.m., in order to help commuters avoid rush hour, Chief Operating Officer Steve Goldberg said.

Employees are anxious about COVID-19 exposure on public transportation, he said, but they also want to keep working remotely at least part-time because they feel it has real benefits — what the Jewish Education Project is calling “COVID keepers” — such as more time with family.

The Union for Reform Judaism’s 260 employees feel similarly, said Melissa Johnson, the organization’s general counsel and vice-president for people and culture. Her predecessor was a human resources director, and the Reform movement hired her in September to elevate the job of creating a humane, equitable workplace culture.

The organization plans to describe its employees as a “remote work force.”

“This is about encouraging work-life balance,” she said. While the organization has several offices, and they are still working out the details of a hybrid model, they know there will be an emphasis on remote work.

Cooks said most of the organizations she works with through Leading Edge are thinking about how to facilitate creative work, which is easier to do in person. Also, she said, many adults appreciate the social aspect of office work. People meet their friends and even spouses there.

“What we were missing was each other, and those opportunities for creativity and collaboration,” Goldberg said.

Cooks said she hasn’t heard of any organizations requiring employees be vaccinated before returning to the office, but she has heard that some might require unvaccinated employees to wear masks.

The question of how to handle vaccinations is still an open one for the Jewish Education Project and among his colleagues, Goldberg said.

The complex nature of these questions means managers need both to understand that their decisions might need to change, but also to try to make do with whatever they decide for at least three months so as to smooth the transition into post-pandemic work life, Cooks said.