When COVID-19 hit Jerusalem in early March, 2020, the field was in full activity. Initiatives and programs were blossoming, the diverse networks were highly engaged, and a sense of “stuff was happening” permeated the air. 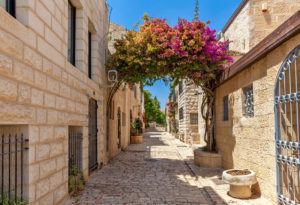 Then the entire city went into lockdown on March 15 and everything froze. Total shock. How could all these organizations keep operating? Much like the reactions of many at the time.

The Jerusalem Model, established in 2017, is a unifying, supportive and galvanizing platform for innovative and young social entrepreneurs working to strengthen the resilience of Jerusalem’s civil society. Part of the Jerusalem Model’s activity in routine is to provide what can best be described as “assessment grants” – grants that come to support ideas at their most initial stages, results of partnerships between activists. While modest, these grants are both high-risk and very easy to access, allowing social entrepreneurs to easily beta test new ideas and partnerships and discern viability in order to attain a proof of concept.

On April 6th, the Jerusalem Model released a call to members in its network to apply for small microgrants (capped at $2,600) for emergency relief initiatives. On May 19, we released a second, and on October 4, we released a third. Between April and November of 2020, 79 emergency grants were approved for a total of $200,000.

Recently, we have been getting reports on the progress and development of the different activities and initiatives that benefited from these small grants. These funds may seem minimal. How much can $2,600 or 9,000 NIS actually do? Quite a lot, as we were delightedly surprised to learn.

Let me present some examples.

There was a program being offered by the Jerusalem College of Technology, who, during the second lockdown, offered the expertise of their students to help, with tech, tackle challenges faced by disadvantaged communities in the city. The Melabev organization (a day program for elderly suffering from Alzheimers) approached them with the need to create an online platform with video content for their participants, as they could no longer come into the centers. The students worked diligently on an online platform, but really needed the expertise of a developer to get the platform live. This is where a small grant made a big difference. With the expertise of the programmer, Melabev now has an easy to use, streamlined video platform that is accessible to all the patients they serve – from wherever they are. Even more so, it takes the programming from being highly localized to open to users anywhere. This jump in scale was accomplished with only NIS 9,000.

Take the Jerusalem Food Rescuers initiative, a pilot program founded to bring excess food from the wholesale fruit and vegetable market in Jerusalem and distribute it to families in need. At the onset of the pandemic, this initiative was still in very early stages. Corona brought the need for fresh food for needy families into sharp relief as the welfare packages provided by the government only provided dry goods. With a small grant of NIS 9,000, which covered gas, parking and some support for volunteers, the initiative proved how the mechanism for distribution would work. Now, they are partnering with the Ministry of Welfare to support the food packages already in distribution with fresh food and vegetables to residents both in East and West Jerusalem.

Jerusalem also experienced Ramadan during the first lockdown. A primary focus of the holiday is the gathering together of friends and family which of course at the time was highly discouraged if not impossible. Much of the vibrancy and energy of the holiday was missing. In order to lift the spirits of the residents of the Beit Hanina and Shuafat neighborhoods, the Kulna Yerushalayim organization led a series of street performances, available to anyone via Facebook Live, aimed at raising the spirits of the residents and supported by a grant of 9,000 NIS. After seeing how successful this concept was, the Jerusalem Municipality put major funds toward more outdoor cultural programming for the rest of the holiday.

The neighborhood of Har Nof was hit hard by COVID. Not only were many in the neighborhood sick with the virus, the neighborhood also has a large elderly population. With the sickness raging around them, many of these elderly were afraid to leave their homes. Being ultra orthodox, many were also without technology and access to the internet. For a small grant, tablets were purchased, and volunteer tech support from the neighborhood connected the first round of recipients to the Internet so they might be in touch with their families over video. This concept was so well implemented that it went on to receive more funding from the local community centers to reach many more elderly residents in the neighborhood.

Many times, we operate under a misconception that large scale social change is only possible with the investment of large scale philanthropic funds. That the average citizen cannot truly impact their environment because they just don’t have the means.

If a simple NIS 10,000 might prove a concept, close a gap or establish trust, this level of social impact is in the hands of average citizens and not just established philanthropies. What change might be possible if Jerusalem had a diverse network of giving circles to support the rich and active civil society around it? That capital was available and provided by the people who were living and experiencing the gaps that the nonprofits were attempting to solve. Let us even take this a step further – what if each neighborhood had such a fund, for small projects? Changing the dynamic and creating more ownership among residents and less reliance on philanthropies from abroad.

There will be lessons learned from the Corona Crisis for years to come; let one of them be the power of small and flexible grants for nonprofits, trusting those on the ground and putting emphasis on local support for the pioneering of new ideas.

Ariel Markose is the Director of the Jerusalem Model, a network of highly engaged individual activists in Jerusalem. The Jerusalem Model brings the activists from all sectors  of the city into a broad network which leverages their creativity and diversity to define and pioneer a better future for Jerusalem, influencing decision makers from the bottom up. She lives in Jerusalem’s Katamonim neighborhood with her husband and 3 children.