This rabba’s busy season is right before Rosh Hashana — but not for the reason you might think. 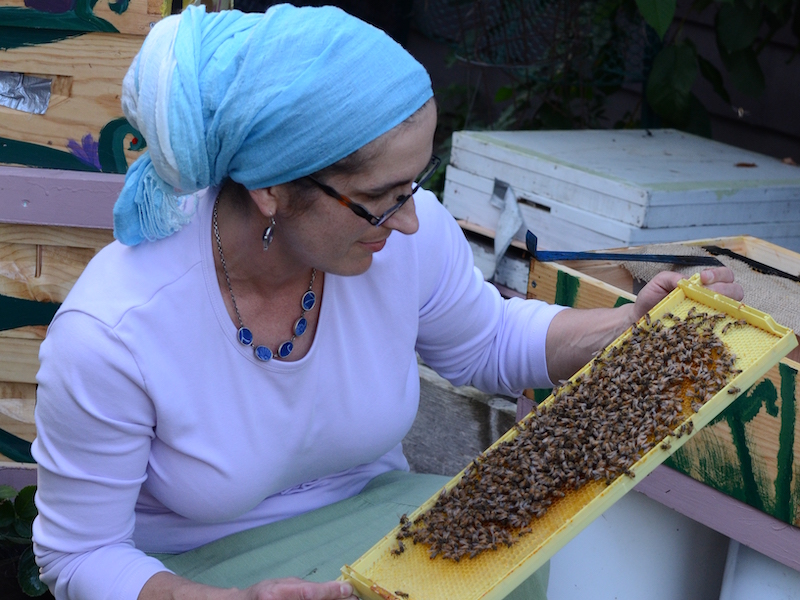 With less than a week before Rosh Hashanah, Rabba Amalia Haas has been, well, busy as a bee.

All day Wednesday, the CEO, or “chief bee whisperer” of Bee Awesome was packing and preparing shipments of honey in time for the Jewish New Year. Between in-person and online sales this year, she’s sold about 1,000 pounds of honey.

For the 53-year-old beekeeper, part-time congregational rabbi, chaplain and Jewish educator from the heavily Jewish Cleveland suburb of Beachwood, Ohio, Rosh Hashanah is predictably the busiest time of year. “It’s like people who run a haunted house in October,” she told eJewishPhilanthropy.

“Everyone from the most unaffiliated to the most Orthodox gets pretty obsessed about bees and honey,” she said, adding half-jokingly, “No Jews buy honey after Rosh Hashanah.”

Haas told eJP that she received many orders from nonprofits to give to their boards and donors. She feels proud that her honey is helping Jewish communal leaders show appreciation.

Haas has been beekeeping for more than 12 years. She began while leading a pluralistic Jewish gardening program as well as developing and teaching a national gardening curriculum. “I kept noticing the bees and the pollinators at that time in the garden,” she told eJP.

When she learned she was pregnant with twins, she wanted a way to continue her work in environmental education closer to home.

“It wasn’t all planned, I was just looking for something to keep my hand in ecology while I was nursing these twins,” Haas said. “So I got a hive and unexpectedly fell in love, and total fascination, with the bees.

From there she became curious about the Jewish connection to bees. Her website notes that an oft-quoted passage from Psalms says Torah is “sweeter than honey, than drippings of the comb.”

“I started really digging into Jewish sources about the bees, and thinking about how the Jewish calendar is reflected in the cycle of beekeeping and honey production, and developing a lot of educational programs focused on that,” she said. In addition to beekeeping, she offers classes about “What’s Jewish about Beekeeping, and What’s ‘Bee-ish’ about Jews.”

This year, beekeepers have had to contend with declining honey production rates. Canadian beekeepers lost an average of 45% of their bees in the past year due to extreme weather and an increased number of parasitic mites, reported CTV, a Canadian TV station, and according to Forbes, climate change appears to be causing losses for similar reasons in the U.S. as well.

Haas produces honey on a small scale, and says her experience is not representative of national or global trends. She operates four to eight hives at her apiary at home, and an additional 10 to 20 hives on another property. She is what is known as a “sideline beekeeper,” a category for beekeepers who produce more than hobbyists but less than large-scale companies.

Still, Haas’s hives have “absolutely” been impacted by both mites and climate change, she said.

“When we get too much rain in the spring, the bees can’t fly,” she said. “My beautiful population of bees is standing at the entrance of the hive sort of saying, ‘When will the rain let up?’” The inclement conditions limit their ability to pollinate and produce honey, which serves as both food and insulation for the bees.

“Clearly the sages never anticipated a world where there would not be enough flowers to sustain nature and natural systems,” Haas said. “But if they had, they would have legislated that people are responsible for maintaining enough nature that bees and other creatures could survive.”

But Haas said selling honey is only part of her work to ensure a sweet new year for her fellow Jews. “I’m a rabba and a Jewish educator and that is a large portion of my work, and [I] also work around Torah, bees, sustainability,” she said. “In other words, I operate as an environmental educator and not as a full-time beekeeper.”

She sees her role as “educating the Jewish and wider community to live in a more sustainable way.”

“The more people that steward their land in an organic and sustainable way, the easier it is across all measures,” she said. “It’s better for human health, the environment, it’s better for the bees. It’s a win-win-win.” .

She added, “It takes 2 million flowers to produce 1 pound of honey. So when people dip their apple into the honey, they’re picking up about 100,000 flowers worth of nectar.”

In other words, celebrating a sweet new year this year and in the future depends on flowers — and bees.