The delicate balance between individuality and collectivity has been broken by a culture that sees individuals as independent agents, that glorifies selfishness and suggests that we owe no solidarity to our fellow Jews – and by and large to our fellow humans.

One of the quotes that is repeated the most around the holiday of Tu B’Shevat (the “New Year of the Trees) is, “Because Man is like a tree in the forest” (Deuteronomy 20:19). Rabbis in every generation have tried to explain that meaning-rich comparison, and many see that quote at the root (so to speak) of Judaism’s approach to stewardship of the Earth.

But can a tree be compared not to an individual person, but an entire people? 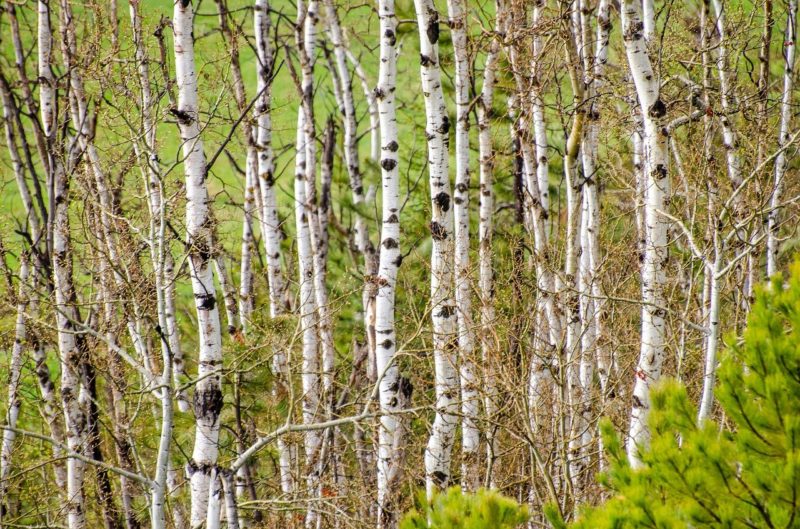 One particular tree can. The aspen, from which that beautiful Colorado town takes its name, is a remarkable plant. Beneath its deceptive simplicity, that tree is a wonder of evolution. Aspens are connected by their roots to other aspens, making aspen forests not a collection of individual trees, but one single organism. In fact, the Pando Forest in Utah is the largest living organism on Earth. The 43.6-hectare (108-acre) forest contains more than 40,000 individual trees that are estimated to weigh collectively six million kilograms (more than 13 million pounds). With a root system that is at least 16,000 years old, the forest is not just the biggest, but the oldest, living organism.

The interconnectedness of the aspen trees makes them incredibly resilient. Nutrients and water circulate freely among the trees, and the stronger help the weaker to the entire forest’s benefit. That’s how the Pando Forest, for example, is believed to have survived the Ice Age. The aspen has also performed a great feat of adaptation that allows it to thrive in the harsh winters of the Rockies. While most trees rely only on their leaves for photosynthesis, the aspen’s photosensitive bark captures the pale winter sun and converts it into calories. That provides the aspen a dual feeding system: one collective (through the shared root system) and one individual (through each tree’s photosynthetic bark and leaves).

In a quasi-post-modern dance of collective and individual identity, the aspen trees share genetic code (their genotype) but develop an individual phenotype (how those genes are expressed). Of course, sometimes interconnectedness can be a problem. Due to climate change, a fungus called the Aspen Leaf Blight that used to come only occasionally to the Rockies now appears twice a year. That insidious microorganism hijacks the trees’ DNA. Since all the trees in the forest share a genetic code, when a single tree gets infected, the whole forest is at risk. Needless to say, the recent forest fires in Colorado also present a formidable threat to trees that are interconnected.

You’ll indulge me if the metaphor is too obvious to spell out, but this Tu Bishvat, we can reflect not only on how individual persons can be compared to trees but on how we, Jews, as a people resemble the aspens.

We too are connected at the roots, which is, in great measure, the secret to our resilience. We are all linked in an inextricable network of mutuality and that has allowed us to endure and outlive the challenges that history has thrown at us. That interconnectedness is ideological, existential even, but it’s also very practical: Every Jewish community understood that we are only as strong as our weakest link, and that help needs to flow from the privileged to the less fortunate. That’s why we have always created organizations for mutual aid, welfare and assistance to the needy. That’s why one of the best-known quotes in Judaism is that “all of Israel are responsible for one another.”

Another ingredient in Judaism’s “secret sauce” is that, like the aspens, we are adaptable. Judaism’s fine balance between change and tradition, between flexibility and attachment to core values (what my friend, the Israeli social entrepreneur Gidi Grinstein, calls “flexigidity”) is what kept our culture relevant and meaningful through the ages. We didn’t reject change but neither did we succumb to the temptation of swimming with every passing current.

Like the aspens, which combine a collective genotype with an individual phenotype, we need to find an equilibrium between our collective identities and our individuality. Yes, we are all linked, but unity is not the same as uniformity. Belonging to one body is our strength; being different from one another is our richness. We share roots, but each of us branches individually towards the sky.

And like aspens, when one of us is attacked all of us suffer. We can’t regard a threat to another Jew as something that won’t affect us, because we are all part of the same organism. (We may not love all our limbs, but what can we do? They’re all part of us.) If we ignore what happens to other trees, we may be the next hit by blight.

And yet, those characteristics that we share with aspens are in crisis. Our interconnectedness is threatened by increasing polarization and animosity; by viewing our diversity as a problem rather than a source of richness and by demonizing those that aren’t like us. The delicate balance between individuality and collectivity has been broken by a culture that sees individuals as independent agents, that glorifies selfishness and suggests that we owe no solidarity to our fellow Jews – and by and large to our fellow humans.

We ceased seeing attacks on some Jews as attacks on all of us. When a Chasidic Jew is attacked in Brooklyn, liberal Jews don’t think it impacts them, because their lives are so different. When progressive Jews like George Soros are attacked with antisemitic tropes, moderate and right-wing Jews relativize it because of conflicting views on Israel. It turns out that today we tolerate antisemitism as long as it targets only “the other kind of Jews.” We don’t realize that in an aspen forest, it doesn’t matter which tree the blight attacks: All the trees will be affected sooner or later. And like in Colorado, blights that used to be rare are now commonplace.

We also seem to have lost our capacity to balance change and permanence, adaptation and tradition. We have created generations of Jews that are ignorant of our common roots, and we have enshrined a model of engagement that doesn’t demand any meaningful exploration of these roots. Most Jews are today like aspen trees that will go through life without ever knowing the amazing network of underground channels of life that sustained us through millennia. Others will go to the other extreme: getting stuck in those old roots and, by an artificial rigidity that rejects all that’s new, risk the obsolescence of the entire system.

Maybe this pandemic Tu Bishvat, we can, as our tradition demands, learn from trees. Let us use this massive jolt in our lives to rethink our relation to one another, to rebuild the links of care and solidarity that were our strength and our uniqueness. We can relearn the art of being one people and the beautiful, mutually enriching dance between celebrating individualism and belonging to one of the oldest cultures in human history. We can replace a paradigm of dystopian libertarianism with a new system of mutuality, in which, as President John F. Kennedy put it in his inaugural address, “the strong are just and the weak secure.”

It won’t be easy: We are up against a zeitgeist that favors the lone tree in the prairie over the lush, bio-diverse forest in which many creatures can feel at home. But if the flimsy aspen tree, with each unique blend of being one and being many, could withstand the enormous power of the advancing glaciers, there’s no doubt we Jews can do it too.