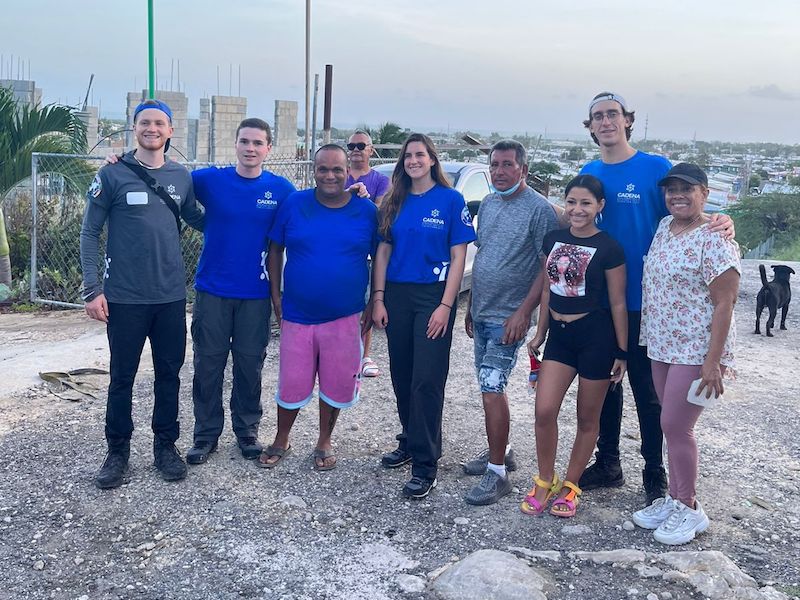 The Cadena team meets local Puerto Ricans in the disaster zone in Ponce this week.

On Tuesday, two days after Hurricane Maria made landfall in Puerto Rico — knocking out most of the island’s power, limiting access to drinking water and displacing people from their homes — a team from the Jewish humanitarian aid group Cadena landed in the disaster zone and got to work.

For Cadena, a nonprofit based in Mexico, it was important to mobilize as quickly as possible instead of waiting for the government to respond — a lesson the group learned from witnessing the delayed government response during Hurricane Maria five years earlier. At that time, Cadena was dealing with a crisis closer to home after a 7.2-magnitude earthquake in Oaxaca, Mexico, but still sent a shipment of 100 tons of supplies including gasoline and generators to Puerto Rico.

This week, after conducting an initial assessment to evaluate the precise needs of the population, Cadena, which aims to work in cooperation with those who have been directly affected, sent five aid workers to the island who are trained in humanitarian and survival skills. To address the immediate need for clean water and electricity, the team is carrying 500 water filters – each able to clean 800 liters of water a day – and hundreds of solar lamps. The team also hopes to help people in crisis tap into their own resiliency.

“The most important thing is to be there as soon as possible and secure the way of life of the people,” Benjamin Laniado, Cadena’s general secretary, told eJewishPhilanthropy. “And then they have the capability to wait. But to wait in security, with protection… they have to live with dignity.”

Cadena means “chain” in Spanish, and was chosen as the group’s name because “to do a humanitarian mission, you need a chain of alliances … from the philanthropy to the volunteers to the office, everything is a chain,” Laniado said. A chain of people helping is also necessary when providing disaster relief, he added.

Cadena is one of a few Jewish groups that has sent aid workers or supplies to Puerto Rico — and that is trying to apply the lessons of past emergencies in order to ensure a more effective response this time.

A psychotrauma and crisis response team from the emergency medical service United Hatzalah is set to arrive on the island today to provide “psychological first aid,” Raphael Poch, an EMT and the group’s spokesperson, told eJP. Poch said that unit was created in 2016 after Hatzalah saw how people were traumatized after witnessing a Hatzalah EMT being hit by a car.

“If someone’s traumatized by seeing a car accident where the person who was hit gets up and walks away, how much more so are they traumatized by an actual severe trauma that either happens to them, their family members, people close to them or if they witness something like a terror attack?” he asked.

Hatzalah subsequently trained mental health professionals to take their therapy practice out into the field, adapting it to traumatic situations where they may have five to 10 minutes with a person instead of a regular hourly session. Poch said Hatzalah’s aim is to help a person through the immediate trauma they are facing, in order to prevent an acute stress response from turning into PTSD. This is done through group and individual debriefing sessions where the group refocuses people’s attention on the control they do have.

Hatzalah has been on seven international missions since 2016, including assisting in Hurricane Irma and Hurricane Harvey on the U.S. Gulf Coast in 2017, and has trained teams to provide psychotrauma support in locations ranging from New York to Johannesburg.

“Even if it’s something very, very small like, can they help their own child, or can they help their neighbor with something, it will give them a sense of control that they can then re-exert in their life,” Poch said regarding disaster survivors. “And that will help well into a larger sense of control and then getting the person back on their feet.”

Hatzalah’s team of four psychotrauma professionals and two logistics officers anticipates going to the places in Puerto Rico they have been told need substantial help – like the cities of Ponce, Guayama and Guanica, although that plan may change once the team assesses needs on the ground. Their efforts will be focused on people whose homes have been destroyed and who are now living in shelters. The Hatzalah team includes EMTs who can provide medical assistance and  then refer people to local service providers.

One important need highlighted during the group’s work in Hurricane Harvey was to also provide support to rescuers and relief teams themselves, providing “psychological stabilization” to continue doing their work.

“People were really working all day long trying to pull people out,” Poch said regarding the group’s 2017 work on the Texas coast. “And then [they] were broken at the end of the day. So, we boost[ed] them back up.”

The Israeli disaster response group SmartAid, which provides humanitarian relief through technological tools, said in a statement that it will be working with local partners to provide internet access in Puerto Rico, and buy and distribute  power banks, solar generators and clean water units. The organization hopes to raise $50,000 for that work.

Hurricane Fiona came at a time when Jewish groups — including Cadena, Hatzalah, SmartAid and others — have been active in the Ukraine refugee crisis, which has drawn a robust Jewish response. The Jewish Federations of North America, which told eJP that it was in touch with partners in Puerto Rico to see how it can respond, added that  the timing just days ahead of the High Holidays adds an additional challenge.

Dyonna Ginsburg, CEO of Olam, a network of more than 65 Jewish and Israeli organizations working to serve vulnerable populations worldwide, told eJP that “humanitarian aid organizations need to weigh a lot of factors before determining when and where to respond.” This includes the capacity of local authorities and civil society to meet the needs of survivors and their openness to outside support; the extent to which organizations already have local partners on the ground; and their ability to also provide support for long-term recovery — as well as funding capacity.

Ginsburg is confident that the Jewish community will continue to step up when humanitarian crises arise, but is worried about what will happen weeks or months later.

“My primary concern is how can we sustain a commitment to meeting long-term needs once a crisis is no longer in the headlines, as well as open people’s hearts to crises of significant magnitude that don’t get real coverage in the media; for example, Ethiopia, Yemen, Somalia, South Sudan, etc.,” she said.

Alongside its work in Latin America and the Caribbean, Cadena has helped more than 8,000 families move from Ukraine to Spain, and has assisted with housing, education and health services. Laniado believes there are enough resources in the private sector to help everyone across multiple global crises.

“People are suffering, and we don’t have to judge… who suffers more,” he said. “Each crisis, each event or hazard… we have to treat that like a unique event. And that’s why we have a lot of deployments right now.”