The road to camp this summer wasn’t an easy one

For the past seven summers, my 14-year-old son Max has loved attending Camp Solomon Schechter. We chose to send him to Jewish camp because we wanted to give Max the gift of independence, of community, and fun with other Jewish kids. Over the years, Max has been able to make deep connections and friendships with kids all over the Pacific Northwest – from Oregon, Washington, and California. In fact, none of his close camp friends lived in our hometown, just over the border in Vancouver, Canada. So, when we fully understood the challenges of COVID, and the impossibility of camp in summer 2020, we were, like so many families, disappointed.

As we headed towards summer 2021, we were not sure if camp would run and again prepared him for that reality. Max already understood that the U.S.-Canada border was closed to all but essential travel, having been unable to see his grandparents who live in California throughout the pandemic. So, when the vaccines started to roll out, and camp announced that they were planning on running, we were still doubtful. 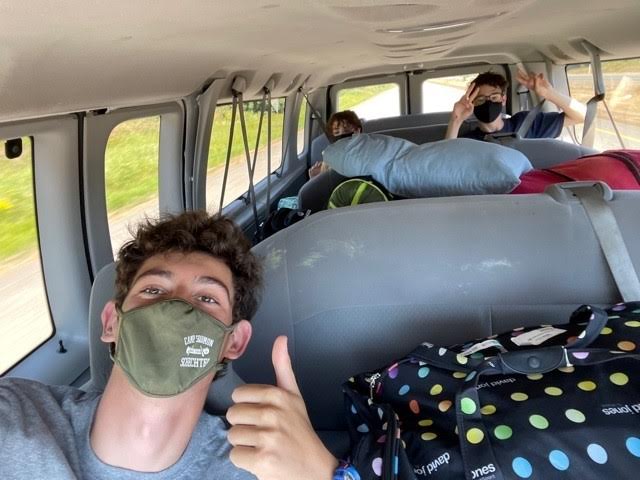 As the weeks went by, Camp Solomon Schechter did everything they could to help Canadian campers get to camp. After exploring our options, I drove to the border and confirmed that, as dual citizens, Max and another child could walk from the Canadian border across to the American side. We looked at maps, coordinated with camp, and contacted American border officials to figure out a pickup location.

On June 27th, Max walked across the Peace Arch Border, luggage in tow. As a mom, it felt almost unbelievable to send my 14-year-old to walk across the U.S.-Canada border to attend summer camp. But camp is all about cultivating creativity, nurturing independence and making memories, and boy was this plan all those things and more. We all breathed a sigh of relief when Max’s counselors called and said they had “eyes” on him. They sent a picture of him in the camp van and then he called, wished us goodbye, and said he was excited to be off to camp. Max then handed over his cell phone, marking the end to a year of screens, and drove off toward a summer of in-person connection. For me, I drove home, assured that my son could once again have a summer in a special community.

The road to camp this summer wasn’t an easy one, but I know that the hardest part of the return trip won’t be the logistics of navigating border crossings during a pandemic. The hardest part for Max will be leaving his camp community after a meaningful summer where he could just focus on being a kid again. But if we’ve learned anything during this time, it’s that the sense of connection and belonging that camp provides our kids reaches beyond the boundaries of time, space – or countries.

Jessica Forman resides in Vancouver, Canada and is the parent of a happy camper at Camp Solomon Schechter.

This piece is a part of Foundation for Jewish Camp’s summer blog series. Follow along all summer long, and share how Jewish camp impacted your life! Tell us your story in the comments, on Facebook, or tweet @JewishCamp using the hashtag #JewishCamp.