How can we continue to serve ever-shifting, transient populations? How do we nurture Jewish communities that gather maybe not weekly or monthly, but a few times a year? How do camps address these communities needs in the ‘off-season?’

It wasn’t until my mid-20s that I realized how profoundly interesting our family’s narrative is. Our family didn’t have any direct connections to the Holocaust, no recent immigration narratives, and despite being Southern California Jews, no stories from Mexico, South Africa or Iran.

My maternal grandmother was born in the 1930s in San Diego, Calif., a decade that saw many Jewish agencies established for the approximately 11,000 Jews in the community (compared to 90,000 today). 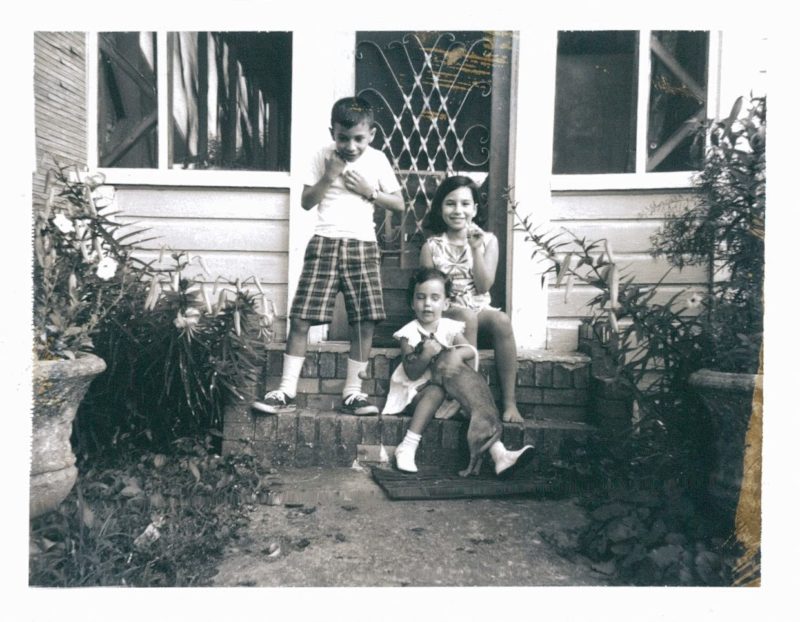 The author’s mother, aunt and uncle on the steps of their home in the country, outside of Birmingham, Alabama

My 93-year-old Zayde was born in the 1920s in a place then-known as Creel Town, Ala., and went to school in Dora, about 25 miles outside of Birmingham, “the country.” His own parents arrived in America as infants at the start of the 1900s; my great-grandmother Mary (Miriam) was raised in Birmingham. The family owned a general store — “The Jew Store,” as the neighbors called it at the time. The family’s house was attached, and even though the store sold treif (non-kosher food) at the deli counter, the family kept a kosher kitchen, getting meat on the railway express from Philadelphia. On one occasion, my great-grandfather Morris was robbed and shot, on another, he was mistakenly invited to a Ku Klux Klan meeting. On yet another, someone set fire to the store. Upward mobility meant moving to Birmingham proper – though they still couldn’t afford to live in the wealthy Jewish neighborhood of Mountain Brook, an enclave created by Jews who were turned away from other neighborhoods.

Despite (or perhaps because of) the charged environment in the South in the mid-1900s, my relatives remained proud and active Jews, generations of members of the only Conservative synagogue in town, Temple Beth El. The Jewish community today in Birmingham is fewer than 7,000, but branches of my family are still there, still proudly supporting their community philanthropically and through active participation in the federation and Temple Beth El (my mom and my aunt take great joy in keeping up with goings-on at the shul from the email list).

These smaller Jewish communities are often overlooked, assumed to be dwindling or dying out as synagogues merge or close their doors and younger generations are attracted to larger cities. But the closure of synagogues doesn’t give us the full picture of the Jewish communities.

While I can’t imagine there are any Jews left in Creel Town or Dora, after my experience this year, I’ll admit that I could be absolutely wrong. In a dark year of a pandemic and civil unrest, I had the privilege to help shine a bright light for families – through the Small Communities Incentive Program at the Foundation for Jewish Camp. Funded by a national foundation dedicated to raising the quality of Jewish education and strengthening Jewish identity and in partnership with, and with great appreciation for, a geographically and Jewishly diverse group of camps, we collectively reached out to these smaller Jewish communities to recruit and offer incentives to new campers. There are plenty of proud and active Jews in small communities, but just like their cousins in larger cities, you can’t always find them in synagogues. But we can find them at Jewish summer camp.

Campers from places like Corvalis, Ore.; Charleston, S.C.; Columbia, Miss.; Greensboro, N.C., along with dozens of smaller cities across the country. There has even been such extensive growth of Jewish campers from Ann Arbor, Mich., that FJC launched a new One Happy Camper partnership with the Greater Ann Arbor Federation this year.

In a summer with no camp visits, it was hard for my colleagues and I to feel connected to the camp experience. But hearing and reading the stories and anecdotes of more than 240 young campers who otherwise would not have experienced Jewish summer camp this year, I not only felt close to camp, but I felt close to my roots. The choice my Bubbe and Zayda made, to relocate from Birmingham to San Diego, from near his family to hers, changed the course of our entire lives. I often consider what my life would be like if my mother stayed in Alabama and found a partner in Birmingham instead of an aspiring rabbi from Los Angeles. After what I learned this year, I know that regardless, I would still have as meaningful a Jewish life as I have today.

As the pandemic and other events of 2020/2021 expedite the already-shifting structure and culture of American Jewish communities, it is even more apparent that our communal institutions need to be futures-oriented in their planning. Increased remote employment opportunities, telecommuting and climate change are already driving families to areas with lower costs of living, less population crowding and higher quality of life. Outreach like the Small Communities Incentive program assure families that their kids can still connect with Jewish peers and have a Jewish home base, no matter where they live.

How can we continue to serve ever-shifting, transient populations? How do we nurture Jewish communities that gather maybe not weekly or monthly, but a few times a year? How do camps address these communities needs in the ‘off-season?’ Foundation for Jewish Camp and our network of camps have been working to address these challenges for years. We invite you to join in conversation in with URJ Jacobs Camp and B’nai B’rith Camp in Oregon to learn how they’re serving Jewish community through a regional lens and to imagine together how to bring the culture of camp to your community, and how to bring your community to camp.

Join us in conversation on Thursday, January 6, 2021 at 11am Pacific/1pm Central/2pm Eastern.

Margalit C. Rosenthal is the West Coast regional director for Foundation for Jewish Camp, where she works closely with Jewish overnight and day camps on the West Coast and manages a number of national projects. For questions about the program, you can reach her at margalit@jewishcamp.org