Organizations and museums are investing in TikTok and virtual reality to educate about the Holocaust and combat denial. 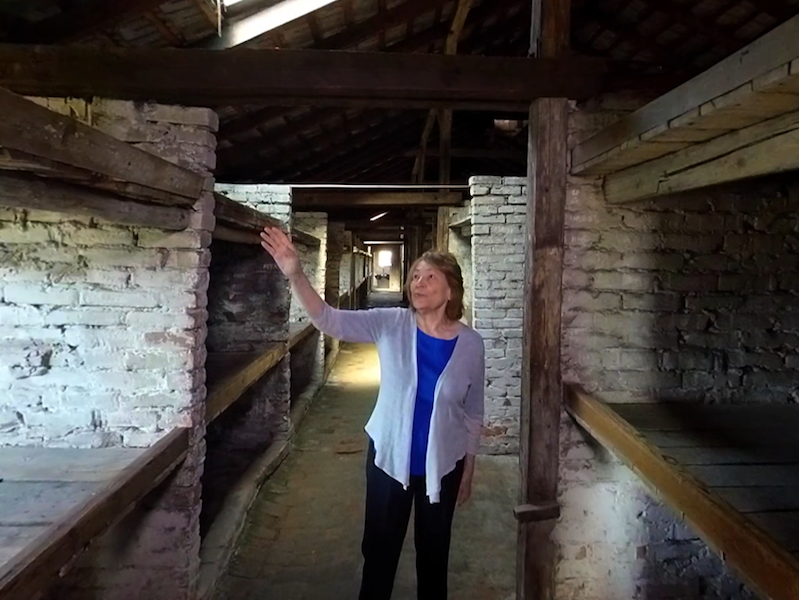 Fritzie Fritzshall, a Holocaust survivor, guides viewers through a virtual reality tour of the Auschwitz barracks.

If your social media feeds soon fill up with videos about the Holocaust, don’t be surprised: TikTok and other platforms are taking center stage in observance of International Holocaust Remembrance Day on Thursday.

Turning to tech platforms to teach people about the Holocaust is nothing new. In recent years, Holocaust remembrance organizations and antisemitism watchdogs have invested in social media messaging, in part due to a perceived rise in Holocaust denial and trivialization online.

But this year, organizations are relying on video in particular, along with other new technologies, to educate the public about the genocide and drive home the relevance of remembering it. And platforms are working with Holocaust educators to spread the campaigns.

“You can have award-winning books and films and exhibitions, but now you are immersed in this experience with the survivor where they grew up, said Susan Abrams, CEO of the Illinois Holocaust Museum and Education Center, which is launching two virtual reality experiences guided by Holocaust survivors on Thursday. “That level of engagement — it’s imprinting, it’s memorable in a different kind of way.”

A campaign by the World Jewish Congress will make the website AboutHolocaust.org a standard feature on TikTok, the video social media platform. WJC created the website ahead of the last International Holocaust Remembrance Day, in partnership with the United Nations agency UNESCO, as a resource for social media users to learn basic facts about the Holocaust. Following accusations that it was too lax in responding to Holocaust misinformation, Facebook began directing users who posted about the Holocaust to the site last year.

“TikTok allows us to reach a new audience, some of whom may be uninformed about the horrors of the Holocaust and therefore be potentially susceptible to misinformation,” WJC President Ronald Lauder said in a statement.

TikTok also partnered with the American Jewish Committee and Central Council of Jews in Germany to teach Holocaust memorial sites in the country how to use the platform for education. Among the sites that participated were the memorials at the Nazi concentration camps of Dachau, Mauthausen and Bergen-Belsen.

“There is no place for antisemitism on our platform, and we do not tolerate any content that denies or relativizes the Shoah,” Tobias Henning, the general manager of TikTok Germany, said in a statement. “Education is one of the most important means to face and combat hate and misinformation.”

Another social media video campaign will focus on the stories of the “Righteous Among the Nations,” non-Jews who saved Jews from the Nazis. The campaign is spearheaded by Yad Vashem, Israel’s Holocaust museum, and the Claims Conference, which facilitates restitution and reparations payments to Holocaust survivors, and consists of 2-minute videos in which survivors and a rescuer recount their stories. The groups are promoting the campaign with the hashtag #DontBeABystander.

“In every nation, there are the same people,” said Anna Stupnicka-Bando, whose family hid three Jews during the Holocaust, in one of the videos. “There are good and bad, cruel and those who have a heart.”.

At the Illinois museum, the video experience goes a step further. In an exhibit called “The Journey Back,” visitors can enter a virtual reality simulation where they accompany two Holocaust survivors who guide them through their childhood homes and then through the concentration camps of Auschwitz, Mauthausen, and Ebensee.

The experiences last between 12 and 14 minutes, are for people ages 12 and up, and were created with the input of the survivors, who recorded hours of testimony in their crafting. One of the survivors, Fritzie Fritzshall, insisted that the latrines be included in the tour of a concentration camp because it was one place where Jewish prisoners could be alone with each other.

“We want the technology to fade away, [where] you are just mesmerized by the opportunity to hear from another human being about these experiences,” Abrams said. “In this situation, you’re transported in a way that it’s just you and the survivor standing there.”

There are more traditional Holocaust-related efforts underway, too. The Jewish Federations of North America recently announced $5.3 million in grants to organizations aiding Holocaust survivors — its largest-ever amount dedicated to that cause. Israeli groups encouraged young people to meet with Holocaust survivors in the country. The Jewish Foundation for the Righteous just completed the latest iteration of a seminar it runs to educate 23 U.S. public school teachers about the Holocaust. Another initiative, from the pro-Israel groups StandWithUs and the International Legal Forum, features students promoting the International Holocaust Remembrance Alliance definition of antisemitism.

In addition, MTV and CBS will both air documentaries featuring survivors. The documentary airing on CBS, called “Undeniable: The Truth to Remember,” even has a TikTok connection: It features Lily Ebert, a 97-year-old Holocaust survivor who, along with her great-grandson, has 1.6 million followers on the video platform.

“I was there in Auschwitz-Birkenau. I am a witness,” Ebert said in a video posted Wednesday, which received close to 10,000 likes within three hours of going up. “The world should never, ever forget the biggest crime against humanity.”