Isresilience: What Israelis can teach the world

A review of Isresilience: What Israelis Can Teach the World By Dr. Naomi L. Baum and Michael Dickson 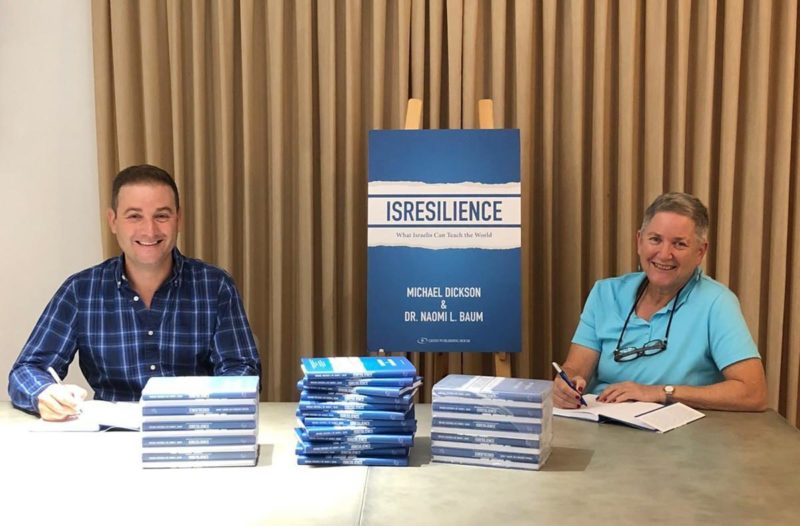 A review by Stephen G. Donshik

Dr. Naomi Baum and Michael Dickson have written a relevant and timely book that can be a source of strength to countries, communities, organizations, and families during the pandemic. Even though they do not deal specifically with COVID-19, their focus on the meaning of resilience and on how people cope with difficult and often life-threatening situations is very applicable to the current crisis. As we are seeing today, countries, cities, communities, and families are experiencing not only the health crisis of the illness itself but also the challenges of returning to a relative stable equilibrium and more normal lives following an overwhelming situation.

Following a discussion of resilience, the authors share how Israelis have developed the ability to bounce back after very difficult situations – ranging from the horrors of the Holocaust, the frightening effects of war trauma and physical injury, the loss of a child in a terrorist attack, to dealing with social discrimination. They present fourteen personal stories that provide a window into how people have struggled not only to rebuild their lives but also to thrive and achieve what they consider to be significant personal and professional goals in their own lives.

Some of the people showcased in the book are well known. For example, Natan Sharansky shares what gave him the strength to survive his grueling incarceration in the Soviet gulag while maintaining a feeling of control over his fate. The authors also find lessons in the life of former Chief Rabbi Yisrael Meir Lau, who came to Israel as an orphan at the age of eight after surviving not only the Buchenwald concentration camp but also the arduous journey to what was then Palestine. He was raised by an aunt and uncle and went on to continue the legacy of generations of esteemed rabbis in his family.

There are also lesser-known role models such as Shula Mola and Mequnante Rahamim, who each struggled as Ethiopian immigrants to find their way to Israel, walking the treacherous and dangerous route from Ethiopia to the Sudan, and then making their way to Israel. The strength with which they not only dealt with the difficult trip but then built new lives for themselves, confronting discrimination in Israel and yet still achieving professional success and standing in their fields, is a testimony to their resilience. In being successful they are also delivering an important message to members of their community that they can also strive and achieve success in their own lives.

Among the fourteen case studies are several individuals who overcame serious injuries and disabilities to achieve athletic success. Noam Gershony won the gold medal in tennis in the Paralympics. Nadav Ben Yehuda is a world-class mountain climber who gave up his quest to reach the top of Mt. Everest to save the life of another climber; he was just 1,000 feet below the summit when he ended his climb. After eight difficult hours, Nadav was able to bring the injured climber to the highest camp where they were both rescued by helicopter and taken to a hospital.

Underlying each of these stories is an important message about resilience, which the authors define as “the ability to withstand difficulties, bounce back after troubles, and continue on, even in the face of gather storm clouds. The concept includes within it two seemingly contradictory abilities: … to withstand and hang tough, and … to be spontaneous, to improvise and to dare to attempt hitherto untried solutions to difficult problems.” They identify three traits essential to resilience: (1) empathy or the ability to be conversant with one’s own feelings or those of others, (2) the flexibility to approach life in a dynamic way, and (3) maintaining meaning in your life.

We hope that soon our communities, and we personally, will be dealing with the post-COVID period of our lives. As much as we yearn for the end of the pandemic, we know that it will not end our struggles with the losses we experienced either personally or communally. We will be deeply involved in the process of strengthening our communities and meeting the challenges caused by the pandemic. As we begin rehabilitating our communities, we will no doubt have opportunities to assist people as they rebuild their own lives following the loss of parents, spouses, children and other relatives.

The stories in the book and the authors’ conception of the tools of resilience can be a source of strength as we work together whether as community leaders and individual friends or relatives. I would encourage you to read it, because it will not only provide you with important insights how to help others but will also offer tools for strengthening your own resilience.

Stephen G. Donshik is a retired lecturer from the Hebrew University’s School of Social Work’s MA Program in Non-Profit Management.