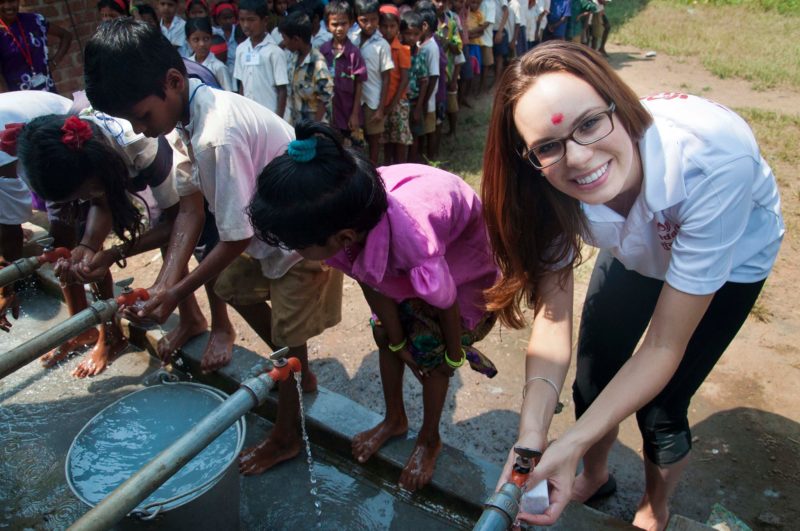 On a post-college trip to Thailand, Erin Zaikis met a group of school children in a small village on the Thai-Myanmar border who didn’t know how to use soap.

“I couldn’t believe it, because I’d never really thought about soap once in my life… It is just always where I needed it to be,” Zaikis, 32, told eJewishPhilanthropy.

Zaikis soon learned that – due to lack of access to soap, clean water and functioning toilets – millions of children were dying each year from conditions like diarrhea and pneumonia. Much like the challenge of world hunger, she realized, global hygiene suffered from a problem of “access and distribution,” she said.

“The world actually does have enough soap for 11 billion people, but it’s really a problem of waste from hotels, and from soap companies not getting [their product] to those who need it,” Zaikis, who was formerly the U.S. CEO of IsraAID, said.

With the seeds of a project growing, she pitched the idea – a nonprofit recycling gently used hotel soap – at a competition sponsored by LinkedIn, won a “big Styrofoam check” for $10,000 and founded the Sundara Fund in 2013 (“Sundara” means “beautiful” in Sanskrit). During Sundara’s first seven years, Zaikis and her team worked across India, Uganda and Myanmar, hiring more than 40 women and providing them with their first-ever formal employment. Sundara recycled over 1 million bars of soap, while reaching 200,000 people with intensive hygiene education each year. The nonprofit also created hygiene education modules in local languages, reaching an estimated 3 million people, Zaikis said.

“Before, we only used soap for bathing and didn’t know that there were other times in the day where we should be using soap, like before cooking and after going to the bathroom,” reads one testimonial, from recipients in Ashte, India, on the Sundara website. “We only used water to wash our hands at those times. Now that we have soap distributed by Sundara monthly, we use it for all those times, as we know now that doing so prevents sickness.”

At Sundara’s peak, the organization had 10 factories (in India, Myanmar and Thailand) and 43 employees. But when COVID-19 hit, the organization lost more than 400 hotel partners – representing 75 percent of their operating funds – in three weeks as thousands of planned visits were canceled. It also had to cancel its annual gala, where the organization had traditionally raised the majority of its U.S. funds, she added. “It was just very hard for us to survive that time financially,” Zaikis recalled. “And the world has never needed hygiene education more.”

She realized the organization needed to refocus its investment on women in these countries who were potential changemakers. Sundara raised around $100,000 and put it into RISE, a social innovation fund to financially empower women who might otherwise have been marginalized and unable to support their families. (The organization is now called RISE by Sundara, while Sundar India continues to provide soap and hygiene products and education.)

“When you give a woman a job, her posture improves, she starts speaking louder, she starts coming up with ideas of what she could do with a bit of investment into her community,” Zaikis said. “I really believe that a financial investment into a woman is the best way to change the problems we’re seeing in the world. I think a lot of men in positions of power are failing us. And so the way to better this situation is by improving the financial stability of women. Because without money, they can’t advocate for themselves. They can’t leave abusive partnerships. They can’t invest into their own health, send their kids to school. It really starts with money,” she said.

In a new episode of “The Five-O-One” podcast, Zaikis told host and philanthropy advisor Talia Lefkowitz that supporting a factory in India costs between $25,000-$50,000; that supports full-time work for four to five women and brings soap to about 200,000-250,000 children each month. To support one female changemaker for a year, it costs $7,500, she said. Changemakers are currently operating in Indonesia, Nepal, Zimbabwe, India, Kenya, Ghana and Nigeria, Zaikis told Lefkowitz. (A transcript of this episode is available at www.thefiveoone.org.)

Zaikis told eJP that RISE received more than a thousand entrepreneurial idea submissions; it is now supporting 11 RISE fellows and 11 emergency aid entrepreneurs from India, Nepal, Nigeria, Tanzania, Zimbabwe, Indonesia and Armenia. The Armenian fellow is starting the first-ever public laundromat in her community, where women wash clothes in frozen river beds that hold toxic waste runoff from Soviet-era factories, leading to increased cancer risk, Zaikis explained. The effort will also employ eight women who can service 1,000 people in this community; when it’s not being used as a laundromat, the building will be used as a women’s community center. RISE’s fellow in Indonesia is creating a low-cost water filter for her community, where the groundwater is polluted by tin mining, leading to an increase in birth defects and cancer rates.

With the shift in focus to empowering women entrepreneurs comes new opportunities to be thoughtful about individual buying habits, Zaikis said.

“Every time you go out and purchase something, you’re voting for the kind of world that you believe in with those dollars. And so if you believe in something like female empowerment, really extend that not just to your charitable giving, but also to your purchasing power, seeing if you can support businesses that are started by women,” she said. When communities run collection drives for women in shelters or who are experiencing homelessness, Zaikis advised, they should include soap, hand sanitizer, sanitary napkins and tampons; the period products are particularly important because, she noted, they are expensive, and are taxed in many states.

“We have to think about ways that we are caring for the most vulnerable women here in our community….and these small changes actually do make a difference.”