The Jewish Agency is accelerating its aliyah process while a Jewish activist in Ukraine seeks out individual cases. 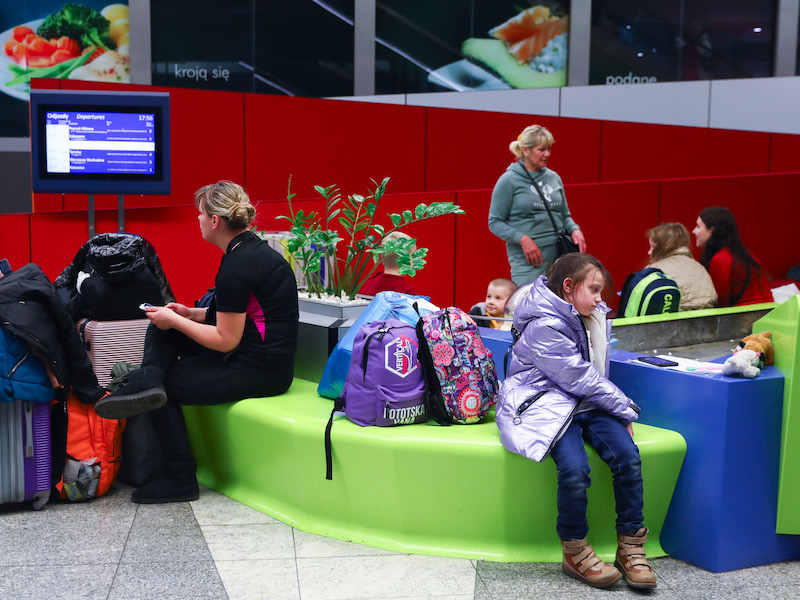 Refugees who arrived from Ukraine are seen at the main railway station in Krakow, Poland on March 22, 2022.

The day before Russian forces invaded Ukraine last month, Gershon Beloritsky sensed that war was coming and sent his wife and five children on a plane to Tel Aviv.

But he stayed behind. Instead of seeking refuge himself, Beloritsky told eJewishPhilanthropy last week, he has spent the past few weeks shuttling around the parts of Ukraine that are still accessible, helping people gather the documents that will enable them to immigrate to Israel. He has visited archival offices, called government bureaucrats, searched online databases and encouraged everyone he talks to to gather as many identifying papers as possible before heading to the border.

“Take all the documents you have related to your family,” he tells Ukrainians seeking to move to Israel. “Your birth certificate, your labor documents, documents of your parents and grandparents. People in danger are not thinking about [providing an] explanation [for] more than their current documents, but for Israel… you need to explain much more than your current status.”

The paper trail is necessary because Israel’s immigration policy is anchored in the Law of Return, which allows anyone with at least one Jewish grandparent (as well as people who converted to Judaism) to gain citizenship in Israel. To be able to marry legally in the country, and enjoy certain other rights, one must be considered Jewish according to Orthodox law — a much higher bar.

Beloritsky is a lawyer by training and his employer, Shorashim, is an Israeli group that used to focus on helping immigrants prove their Jewish status according to the strict standards of Israel’s Orthodox Chief Rabbinate. Shorashim is affiliated with Tzohar, a Modern Orthodox rabbinic group.

But times have changed and Beloritsky — Shorashim’s man in Kyiv — is now focused on helping as many people as possible get out, whether the Rabbinate will consider them Jewish or not. The group also opened up a hotline for Ukrainians seeking help with their documents.

The effort comes as controversy has brewed in Israel over how many non-Jewish refugees the country will allow. To date, more than 6,000 Ukrainians have immigrated, and in total, more than 12,000 Ukrainian refugees have arrived in the country. In an address to Israel’s Knesset this week, Ukrainian President Volodymyr Zelensky asked for Israel to take in more Ukrainians.

Beloritsky said his top priority is establishing eligibility for immigration, “and then at the same time we are looking for the documents which are going to be relevant for the Rabbinate”

The war has also meant that Beloritsky is no longer in Kyiv, his native city, though he hopes one day to return. Until last week, he was traveling from place to place, trying to access government files in person. When he spoke with eJP late last week, he was in a town in the Carpathian Mountains in western Ukraine, though he stressed that he wouldn’t be there for long.

On Tuesday, he informed eJP that the situation had changed: He was now staying put in western Ukraine. Travel around the country had grown too dangerous.

The war has had an inconsistent effect on Ukrainian bureaucracy, he said. Some government records offices are much quicker to respond because he’s the only one who’s still calling them as missiles rain down on the country. Others, in beseiged and bombed-out cities, are impossible to access.

Beloritsky also works to access a variety of databases across the former Soviet Union and beyond — all of which are liable to have noted whether someone was Jewish: universities, the military, certain government agencies, Holocaust victim and survivor databases and records of World War II refugees.

“If you’re inside [the country], you can do much more than if you’re outside,” he said. “But in some cases, even if you’re inside, it’s not a big benefit because it’s a military zone, everything is closed and it’s being bombed every single moment.”

The Jewish Agency for Israel, which handles the Israeli immigration process, has also ramped up its services on Ukraine’s borders, running a total of 18 facilities for refugees in Poland, Hungary, Moldova and Romania. It also has an office in the western Ukrainian city of Lviv. The Jewish Agency has coordinated with local Jewish communities across Ukraine to bus refugees — mostly women, children and elderly people — out of the country, though it doesn’t check that everyone boarding the bus is Jewish. In total it’s chartered more than 200 buses, each holding 30 to 50 people.

Since the start of the war, more than 8,500 people have passed through The Jewish Agency’s border facilities. They’re asked whether they want to stay in the country they’re currently in, go to a different country in Europe or move to Israel. The Jewish Agency also provides the refugees with temporary lodging, food, clothing and essential supplies.

Once potential Israeli immigrants are in the facilities, Jewish Agency COO Yehuda Setton told eJP, proving Judaism is straightforward. Israeli government officials are there to do interviews and have access to Israel’s government databases — bureaucratic luxuries that individuals who contact Beloritsky lack.

At first, it would take 40 minutes to an hour for officials at Jewish Agency facilities to screen Ukrainians for immigration. But because of the high volume of interested people — some 8,600 people have called inquiring about immigration — The Jewish Agency decided to fast-track the process. “We want to send those people to Israel… where they will feel like they’re not under a war zone,” Setton said.

Now, the whole immigration interview takes five to 15 minutes, and involves three questions: Do you want to move to Israel? Have you or any relative participated in a Jewish Agency program? Do you already have a close relative in Israel? Answers to those, Setton said, cross-checked with Israeli records, can quickly determine whether a refugee is eligible for citizenship. After having begun to implement this process, The Jewish Agency is flying hundreds of Ukrainian immigrants to Israel per day.

“Almost all of the Jewish Ukrainians have family in Israel, so if they’re really eligible for aliyah, it’s not easy but you can find relatives that have documentation ,” Setton said. “We will do whatever it takes to rescue Jews, and whatever it costs.”

While those Jewish Agency flights take off for Ben-Gurion Airport, Beloritsky continues scrambling, still hoping to help whoever would like to get to Israel. His family wants him to make that journey too. But for now, he’s staying in Ukraine.

“We try not to find explanations for why it’s impossible, why it’s hard,” Beloritsky said, referring to his work. “We’re trying to find the only explanation for why to do it. [My children] call me sometimes and say, ‘Father, come to us, come to us.’ I explain, ‘Yes, yes, it will be soon, but not so soon. It will take time.’”