The Museum of Jewish Heritage in New York City has hosted politicians at past events. 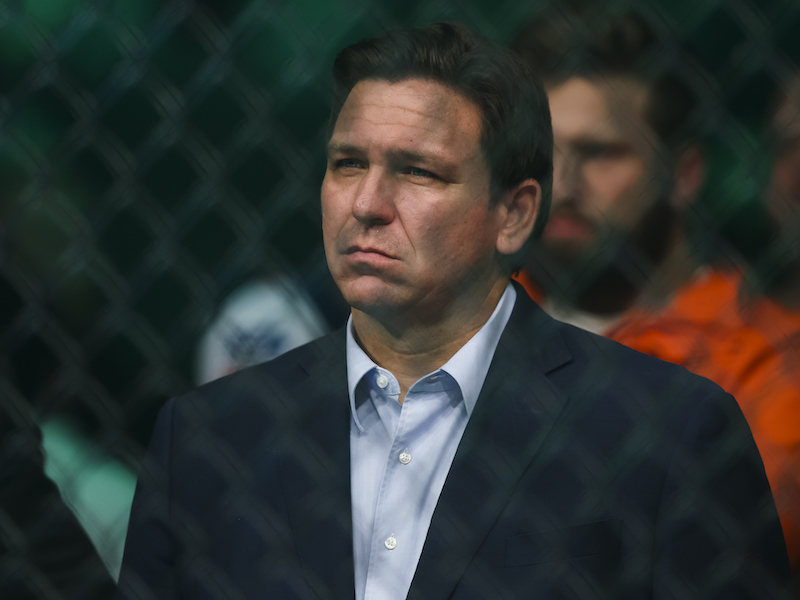 This article has been updated with recent comments by the Museum of Jewish Heritage and a response from the Tikvah Fund.

New York’s Museum of Jewish Heritage told organizers of an upcoming conference that a scheduled speaker, Florida Gov. Ron DeSantis, was unwelcome at the institution, Elliott Abrams and Eric Cohen wrote in a Wall Street Journal op-ed that was published yesterday. Abrams and Cohen are the co-chairs of the Jewish Leadership Conference, a gathering set for June 12 and organized by the conservative Tikvah Fund. The conference was due to take place at the Museum of Jewish Heritage in downtown Manhattan, they write — until DeSantis accepted an invitation to speak.

Then the museum informed the conference that DeSantis was not welcome to speak on its grounds because he doesn’t “align with the museum’s values and its message of inclusivity,” they wrote. Faced with a choice between disinviting DeSantis and moving the conference, they said, they moved the conference.

“We know things are bad when a Jewish institution — in this case, a museum whose purpose is to keep Jewish heritage alive by remembering the Holocaust — turns on its own and tries to make a virtue of its own intolerance,” Abrams and Cohen wrote in their piece. “What drives our elite institutions — museums, universities, large corporations, the media — to shut down speakers and ideas that question progressive orthodoxy? In many cases, the explanation is sheer cowardice.”

The Museum of Jewish Heritage declined to comment to eJewishPhilanthropy prior to publication of this article. Shortly after the article was published, the museum sent a statement saying that the quotes in the Wall Street Journal op-ed were “fictionalized,” and called the dispute “simply a contractual and logistical decision.”

A spokesperson for the museum told eJP said that the museum had never signed a contract with the Tikvah Fund, and that it declined to host the event as soon as it saw the event’s details. The statement from the museum said, “This is not a free speech or censorship issue,” but when asked by eJP, the spokesperson would not say whether DeSantis’ planned appearance is what prompted the decision to decline the event. The museum also declined to share email correspondence or other documentation of the decision.

Cohen stood by the quotes in the op-ed, which he said were based on detailed notes taken immediately after a series of phone calls beginning April 26, when Tikvah was first informed of the museum declining to host the event. Cohen told eJP that Tikvah has held a series of events at the museum in the past without issue, and that the clash over DeSantis’ appearance occurred without warning. He said the museum had agreed to hold the June 12 date for Tikvah, and the two organizations were figuring out audio-visual and catering details. In addition, he said Tikvah had signed a contract with the museum, but the museum never countersigned. “We were told explicitly that DeSantis would not be allowed to speak and that we should stop payment on our deposit,” Cohen told eJP.

“Never before did the museum share their opinions about or seek to assert oversight over our guest speakers,” Cohen told eJP. “The initial objection came from members of the museum staff, who said explicitly that Gov. DeSantis was not in line with their message or values and would not be welcome.”

Cohen told eJP that he later spoke with museum CEO Jack Kliger and that Kliger said the decision to bar DeSantis was final. The conference will now be held at Pier 60, with DeSantis on the roster.

DeSantis’ office did not respond to a request for comment, but told WFLA, a local Florida station, “We hope that this is all a misunderstanding, and the museum leadership will rectify the situation, because a Holocaust memorial should never be politicized.”

Other current and former political officials have spoken at Tikvah conferences, including Abrams, a former deputy national security adviser; former U.S. Amb. to Israel David Friedman; and former Secretary of State Henry Kissinger. In addition to DeSantis, former Secretary of State Mike Pompeo is speaking at this year’s conference. Both are thought to be potential Republican candidates for president in 2024.

The museum has hosted politicians at past events. Less than two weeks ago, Sen. Chuck Schumer (D-NY) and United Nations Amb. Linda Thomas-Greenfield spoke at a virtual ceremony in memory of the Holocaust. Ron Dermer, then the Israeli ambassador to the United States and a close ally of Benjamin Netanyahu, spoke at the 2017 Tikvah conference. During her first campaign for Congress in 2018, Rep. Alexandria Ocasio-Cortez (D-NY) spoke at an event at the museum hosted by the Immigrant Arts Coalition, where Judaism and Israel were not discussed onstage.

Abraham Foxman, the former chief of the Anti-Defamation League who served until recently as the head of the museum’s Center for the Study of Anti-Semitism, told eJP that the museum’s decision, as described by Cohen and Abrams, is “an outrage.” He also said that in his time at the museum, he never would have expected it to bar a politician unless the politician were explicitly antisemitic or a Holocaust denier. While DeSantis has sparked opposition due to his lax policies on COVID-19 and other issues, Foxman does not believe he deserves to be barred from speaking.

“Why this decision? It’s political,” Foxman said. “And a Holocaust institution should not be politicized.”