When Ginsberg died this past summer, her supporters didn’t want to let her go. Veronica Sabbag, founder of United Voices 4 Peace, and Pedro Henriques da Silva, who now performs with the Manhattan Camerata, teamed up to continue her legacy virtually.

It has been a month since eJP published ‘Are NFTs the Answer to Jewish Woes?’ and I am still getting emails from readers who were intrigued by the idea. Family foundation professionals and entrepreneurs, content creators and art collectors, web builders and young thought leaders…the Jewish community is full of people trying to make sense of the metaverse and what it will mean for the future of Jewish life,” writes Rebecca Dinar, a longtime community professional, in an opinion piece for eJewishPhilanthropy

Last week, in honor of Holocaust Remembrance Day, I learned about a project that got me excited. An art-supporting nonprofit based in Brussels and New York joined forces with a group of transclassical musicians to create the “Death Metal Grandma NFT Collection,” a tribute to Holocaust survivor Inge Ginsberg[and heavy metal bandleader and singer]. Bidding is well underway for the five-piece collection available on OpenSea; and can be viewed here. 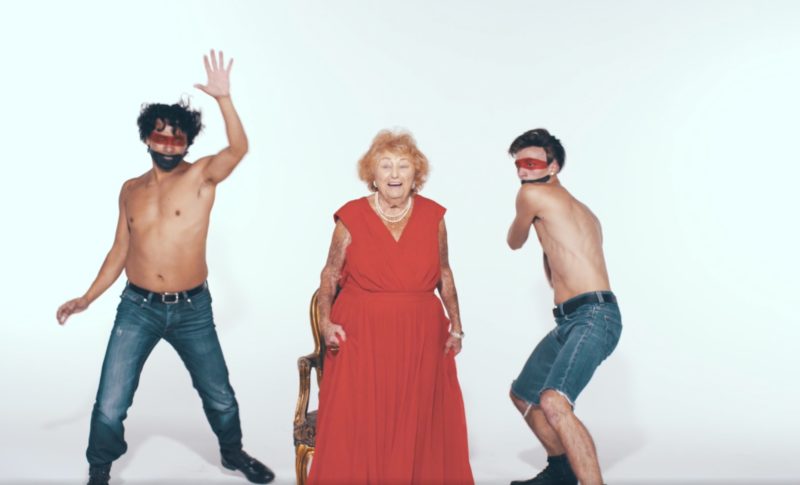 Ginsberg, whose life story is detailed in a short documentary film created by Leah Gant for The New York Times, would have been 100 the day her NFT’s dropped. A musical artist who began her training at age 6 in Austria, she fled the Nazis and somehow survived life in a refugee camp in Switzerland. Then, once the war ended, she moved to Hollywood, Calif., to start a new life, working as a composer and writing songs for icons like Nat King Cole and Doris Day.

As she aged, she became profoundly aware of how society neglects and silences older women and committed herself to finding new ways to reach an audience. That is when she met Pedro Henriques da Silva, a multi-talented musician, who recognized that the dark, soulful quality of her writing was a good match for heavy metal. With support from da Silva and his wife Lucia, Ginsberg, at age 93, launched into a heavy metal career. Her band, Inge & the TritoneKings, had major TV appearances, made the front page in newspapers across the globe and developed a cult-like following.

When Ginsberg died this past summer, her supporters didn’t want to let her go. Veronica Sabbag, founder of United Voices 4 Peace, and Pedro Henriques da Silva, who now performs with the Manhattan Camerata, teamed up to continue her legacy virtually. The NFT collection includes five pieces of digital art that showcase Ginsberg with gory heavy metal imagery. In some of the works she even belts out lyrics in her native tongue.

“The Nazis said that their Third Reich would last 1000 years. It didn’t. But Inge lived to 99. Now she will live forever in the blockchain. There is no tribute more fitting for such an inspiring and modern woman. It’s poetic justice,” said Sabbag and da Silva. And with nearly 25 percent of millennials buying NFTs, the creators hope that the collection will not only extend Ginsberg’s legacy, but also inspire a new generation to reflect on the lessons of the Holocaust and challenge stereotypes about aging.

Rebecca Dinar is a former associate vice president, strategic marketing communications at the Jewish Federations of North America. Previously she served as executive director of The Tribe in Miami, Fla.