looking back, looking ahead 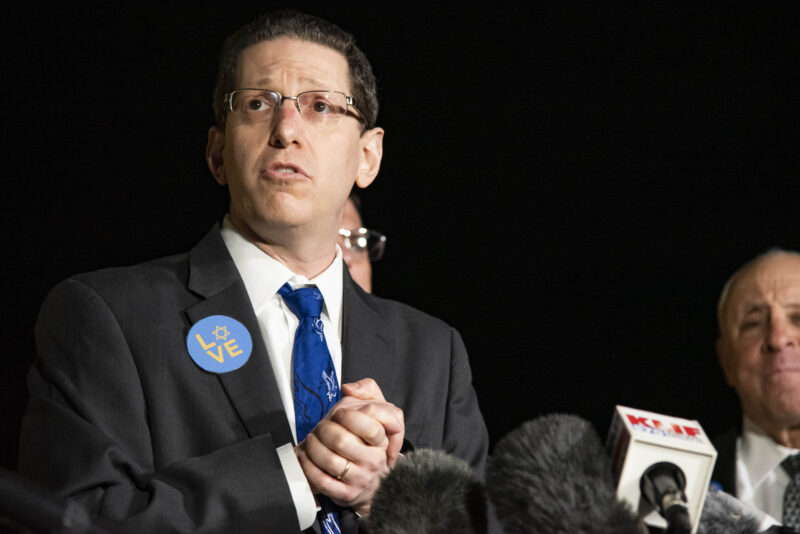 In the year since he and three of his congregants survived an hours-long hostage crisis in Congregation Beth Israel in Colleyville, Texas, Rabbi Charlie Cytron-Walker has testified before Congress, was published in national news outlets, took a new pulpit in Winston-Salem, N.C., became a special adviser to the Anti-Defamation League and has served as a role model for how synagogue clergy should respond to violent antisemitism.

But, he told eJewishPhilanthropy, as he approaches the anniversary of the attack, which falls on Sunday, he’s just grateful to be alive.

Cytron-Walker spoke with eJP on Thursday about how he views the attack one year later, what Jewish communities should do to keep themselves safe and how he’ll be marking this weekend.

eJP: As you approach this weekend, how are you feeling? What are you thinking?

Cytron-Walker: As I approach the weekend, for the most part, I’m feeling grateful that I’m still alive. I am feeling concerned about the rise in antisemitism that persists and exists, and it’s really my hope and my prayer that people from all backgrounds are able to stand together against hate in all of its forms.

It’s a part of my life, but I don’t dwell on it. And it really depends on which moments. There were moments of absolute terror. There were moments of, even, laughter, and there were so many moments in between. But I don’t dwell on it. I haven’t had any symptoms of PTSD that I’m aware of. It’s not something that plagues me. However, it’s very much a part of my life.

It’s the kind of thing that, when I do think about it, it makes me renew the call for advocacy to educate ourselves in the Jewish community, to make sure that we have proper training and procedures. Not because we expect something bad to happen — because the chances are very low that something would happen in any one given synagogue or institution. However, just like you don’t take CPR expecting people standing in line next to you to have a heart attack, you don’t take a civilian response to an active shooter event expecting that someone’s going to walk into your institution with a gun. However, God forbid something bad happens, it’s important to have that level of preparation.

Are you still in touch with the people who were in the room with you?

Jeff [Cohen] and Shane [Woodward] and Larry [Schwartz] and I — I just did some interviews with them earlier this week, and we’ve stayed in touch… Those relationships are good.

What led you to decide to speak out in public forums about the attack and security preparedness?

For me, it was an easy decision. Having an emergency action plan, going through the workshops — those are the things that helped to save my life. So, for me it wasn’t a hard thing. To save a life is to save a world. We were really fortunate on that day. Not everybody has had the trainings or the learning and the education, and if there are things that we can prepare for, it’s important to be able to do so.

I think it’s horrible that we live in this world where we have to have this kind of preparation. And yet our kids do it in the public schools and in the private schools and we have to as adults as well.

How do you think the American Jewish community has changed its approach to security and antisemitism in the year since the attack?

I think that every Jewish community is unique. And I can say that what helped us in Colleyville is that we had one individual in particular and a good group that went along, that said this is important, and that we need to take our security seriously. And I think that there have been more and more people in the Jewish community that have taken on that call and taken on that mantle. We need that.

It’s really important that not just the Jewish community, but that all communities really get to experience this. One thing that I think is important for the Jewish community to hear Is that when we do something like an active-shooter training, I’ve been encouraging people to invite other religious organizations to participate In that training. Because in those moments, those are vulnerable moments.

What is your reaction to the survey the ADL just published, showing a rise in antisemitic attitudes among American adults?

My biggest concern is that so many Americans feel that Jews have too much power. And that idea is a concerning idea, because it was that idea that led a guy to travel from England all the way to Texas to take us hostage because he thought that Jews controlled everything. And so that idea is what led to our ordeal…

It is not true that all Jews work in concert with each other. The only truth when we talk about Jews is you get two Jews, and you end up with three opinions. And so the danger that Jews are acting collectively to bring about some grand plan is just not the case. That’s probably the most concerning piece, and I think that it’s important for all of us, again, through the relationships that we develop and the relationships that we have, to help people understand that.

How should people do that?

How do you plan to mark one year passing since the attack?

My family and I are planning to do something that is life-affirming. Ice cream may be involved.

The way that I’m commemorating is by trying to speak out, raising awareness about the current rise in antisemitism and the ways that we as a Jewish community can respond. To work towards building relationships with others, to put the time and the energy and the effort into building those relationships, and giving our clergy and our community leaders the opportunity to really develop real relationships. Because those relationships are at the heart of a broader communal response.

I also wrote a prayer for peace… which I shared with my congregation yesterday:

In a world that’s broken and shattered,
Plagued by indifference, falsehood and corruption,
We feel the uncertainty.
We feel the pain.
And we are not helpless.

God, we pray for peace:
For wholeness and healing,
For safety when violence touches us all.

God, we pray for peace:
For justice and compassion,
For acceptance in the face of hatred.