The prize is a gift from his children, funded by them, for mid-career achievement 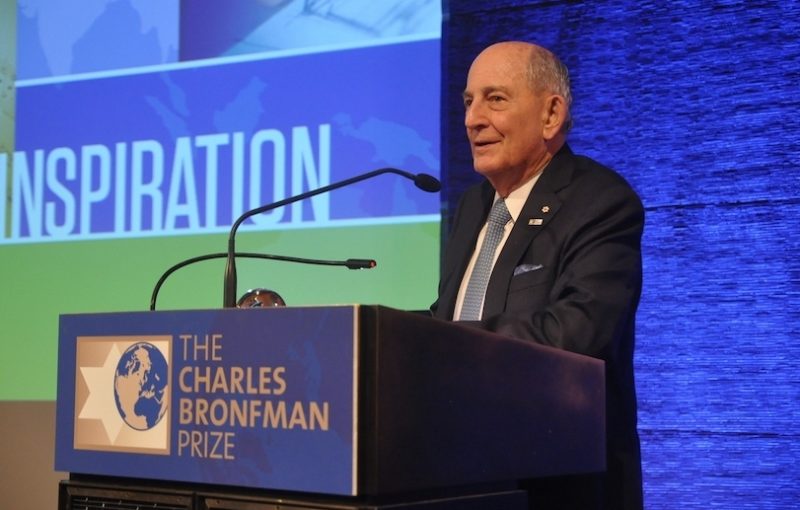 At 90 years old, Charles Bronfman has a long resume: co-chair of Seagram Company Ltd.; majority owner of the former Montreal Expos baseball team; co-founder of Taglit Birthright; first chairman of the United Jewish Communities, now called the Jewish Federations of North America (JFNA); and the namesake of the Charles Bronfman Prize, which is open for nominations now for the 2022 awards. Bronfman spoke with eJewishPhilanthropy about the prize and the broader landscape of Jewish communal life that he worked to shape.

Helen Chernikoff: Why, given the various forms of philanthropy you’ve worked with over the years, did a prize appeal to you?

Charles Bronfman: I actually had nothing to do with the prize. My children surprised me with it for my 70th birthday. The prize was the most wonderful present that I’ve ever had in my life, and every time I think of it, I’m in tears.

All the recipients have to be under the age of 50, and you might wonder if people have really accomplished something worth a prize before they turn 50. But that’s the genius of it. We find people who are in the middle of their career who have already achieved in this way, and we help them do even more. They get a lot of funding from supporters of the prize. And there’s one thing that makes this unique. The prize created a family. Recipients are in touch with each other. They’re in touch with us. There was only one laureate who didn’t work out. That was Eric Greitens, [the former governor of Missouri who resigned amid scandal but had created a veterans support organization] but at the time, he deserved the prize.

HC: You were a founder of Birthright. How does it feel looking back on the early days, now that it’s become this major force in the Jewish world?

CB: We didn’t know it had this kind of potential, me and Michael Steinhardt [one of the co-founders]. The Jewish media thought, “These two don’t know what they’re talking about.” We thought the funding would be a third from philanthropists, a third from the government of Israel and a third from the federations. The federations thought we were invading their territory and the Jewish Agency got very upset for the same reason. We, on the other hand, did a lot of research, and we decided that it had to be a very small, professional group running this, which could make decisions on the spot and didn’t have to go through a whole board to come to a decision.

HC: So the board was more hands-off? Under what circumstances did it weigh in?

CB: Our first leader, Shimshon Shoshani, was incredible. If there had not been a Shimshon and his colleagues, there would not have been a Birthright. In the Second Intifada [the resurgence of violence between Arabs and Israelis in 2000], the Reform movement cancelled their trips and there was a big brouhaha about that. But they were right to do it. They didn’t have the infrastructure that we had, the connections to the government. I asked Shimshon if we should continue our trips, and he said yes, and he explained why. But I said, “This is an important thing. We should have a meeting of all our funders.” We were taking the load off his shoulders and putting it on ours. We had a conference call and I called a vote. Every person agreed we should keep doing the trips. I started to cry at the end of it. That was the only time we met as a board. And now we do have the support of the federations and the Jewish Agency that we envisioned at the beginning.

HC: How long did it take everyone to get on the same page about Birthright?

CB: The federations have never really come up to scratch, to what we thought at the beginning. That’s because they put us in the Israel basket, even though we are really not about Israel. We’re using Israel as a laboratory to figure out how to help people stay Jewish. We’re not in the aliyah business. We’re in the being-Jewish-is-cool business. If the federations had put more money into Birthright, then more of their young adults would be investing in them and ensuring the continuity for their Jewish community.

HC: Why do you think being Jewish is cool?

CB: The tradition, the history, the unique set of values that Jews have had for thousands of years. We’re the only people in the world that’s both a people and a religion, and now we have a state, thank God.

HC: The federation system received a lot of praise for its quick, effective response to the COVID-19 pandemic. Do you feel like the system is basically fulfilling its role in the Jewish communal and philanthropic landscape?

CB: Well, Israel can now take care of itself, so the other needs outside the U.S. that they need to address are some shtetls in Eastern Europe. The bulk of their funds go to their hometown, and I would say that’s probably true, that’s what they should be focused on.

HC: You “sunsetted” your foundation — spent it down — in 2016. Whether or not to do that is much debated in philanthropy. Can you give us some color on how you came to that decision?

CB: I have no prejudice one way or the other. Each family and each foundation has its own situation. We were well-funded, and we gave good money away, but then the Vivendi disaster happened, and Seagram’s stock was in Vivendi stock, so we had the choice of carrying on with the level of money we’d been giving and sunset, or give a heck of a lot less. Other foundations sunset for their own reasons. It depends on your family structure. As long as enough of us are philanthropists and really give a damn, we can play a role.

HC: Is there any weakness you could pinpoint in the Jewish philanthropic or communal landscape, any tweaking that needs to be done?

CB: When I was the first chairman of what was called United Jewish Communities, I envisaged a body such as JFNA that has a plan for overseas and a national plan. I thought it shouldn’t interfere with the local federations unless they asked, and I think that’s happening more and more.

HC: And what encourages you about the world today?

CB: That’s the first really tough question you’ve asked me, and I don’t have an answer. We’re looking at what used to be the most wonderful country in the world, and we can’t have an investigation into an insurrection? I see things like that, and when I see things like what’s happening with the infrastructure bill — they have a joint committee that worked on a deal, and now they say there’s no deal. But I think there will be one. We have a lot of problems in this world. We have too much of a discrepancy in wealth. The middle class always seems to get clobbered. You can say he’s a wealthy man, it’s because he’s old that he can say those things. But it’s true, there has to be some more fairness.