“People know a lot of things about Martha’s Vineyard, but they might not realize that it’s a very personable place,” said Rabbi Tzvi Alperowitz, 25. 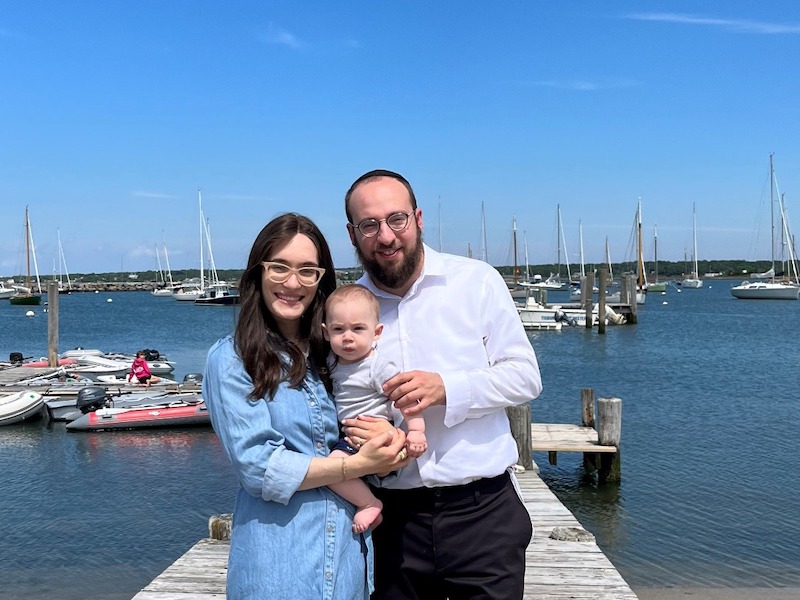 Rabbi Tzvi and Hadassah Alperowitz with their baby.

Chabad emissaries are known for moving to far-flung locales to build a Jewish community, and this month, a young rabbi and his family did just that — setting up a homestead on an island that’s reachable only by plane or boat, and that many people feel is difficult to access.

But shed no tears for the rabbi: The name of the island is Martha’s Vineyard, the upscale Massachusetts vacation destination that attracts the likes of Bill Gates and Barack and Michelle Obama.

“People know a lot of things about Martha’s Vineyard, but they might not realize that it’s a very personable place,” Rabbi Tzvi Alperowitz, 25, told eJewishPhilanthropy. “It has a very friendly feel, people are very welcoming and helpful. People know others in a personal way. That really spoke to us and that’s very much what we’re creating with Chabad — community.”

Alperowitz and his wife, Hadassah, were introduced to the island via his uncle, Yekusiel Alperowitz, a Chabad rabbi on the nearby Cape Cod. They began the process of moving to the Vineyard last year and recently purchased a house with the help of local benefactors. The median price of a home on the island has skyrocketed during the pandemic, from $875,000 in 2019 to more than $1.3 million this year. Alperowitz credited Jewish philanthropist Terry Kassel for helping fund his nascent operation, whose $600,000 budget for this year includes the cost of a down payment.

Although the Alperowitzes plan to focus on year-round and seasonal residents, as opposed to weekend vacationers, the rabbi is very aware that he may soon be rubbing elbows with A-listers and billionaires, including the island’s long list of Jewish public figures. (To cite one example, Alan Dershowitz and Larry David got into a fight last year at a local store).

He isn’t daunted by the prospect. “You have celebrities and very important people, but I think what people like about Martha’s Vineyard is that it’s a very casual lifestyle,” he said. “It’s a place where everybody dresses the same, everybody drives the same cars. You can’t tell people apart.”

If Chabad makes it into the gossip pages, he said, he hopes it’s because two feuding celebrities are seen at Shabbat dinner together. The center’s housewarming event on Wednesday evening featured a buffet dinner and a bar with cocktails. Long-term, Alperowitz hopes to focus on holding community events such as lectures, classes, meals and children’s programming. He also met the leadership of the local Reform synagogue, Martha’s Vineyard Hebrew Center.

Alperowitz grew up in the U.K as the son of Chabad emissaries, and is not the first Chabadnik to set up shop among the rich and famous — there are Chabad centers, for example, in the Hamptons and Aspen, Colo. He said emissaries in other destinations told him something he’s also seen for himself in his new home — his neighbors, whatever their status, want community.

“People are looking for connection much more than you think,” he said. “People are waiting for you to reach out and people want to be part of a Jewish community,” he said. One might think that “celebrities obviously have 100 people reaching out to them, they don’t want to hear from you, [but] it’s not true… People want to be reached out to.”